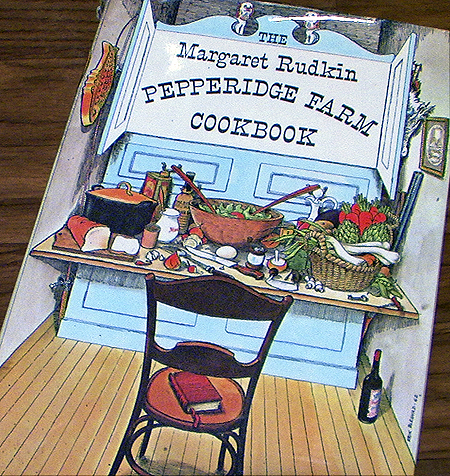 I tried using a smaller pic of this cookbook, but it just didn’t give enough detail of the great cover art.

Back on March 27th I posted quite a few photos from a couple long walks Mary and I had taken the day before in the Waterville and Grand Rapids areas of Ohio along US-24 and the Ohio River. Toward the end of that post is an image of the cookbook you see in the above pic. I’d also written:

The cookbook, “The Margaret Rudkin Pepperidge Farm Cookbook”, contains Rudkin’s autobiography, including how she and her husband first founded the baked-goods company in their barn in 1937. Some of her personal bread and cake recipes are included in the book’s 500+ recipes, including pages of discussions and “rules-of-thumb” regarding making the best baked goods. I felt this was quite a find at $5.

One aspect about that day that I didn’t mention was that, with it only having been a bit more than a week since I’d been in the hospital … and that they didn’t transfuse me after I lost those three units of blood … the walking that day was some of the toughest I’d ever experienced. You know how they make you wait 56 days between donations of one pint of blood? I’d lost three, and it was more than a few months before I actually felt as though I was myself again.

So finding the chafing dish and the cookbooks that day made it all the more interesting. It was cold and the walking became more difficult as the day went on, but I had my dear wife at my side, and she let me buy some cool stuff!

I’d thought I’d blogged more about this great book. But no, I hadn’t. So as the holiday season starts, let’s hear how Mrs. Rudkin enjoyed Thanksgiving and Christmas dinners when she was about ten years old:

Turkey time at Thanksgiving was a great treat — not because of the turkey, to my mind, but for the stuffing. I was so crazy about the stuffing that after the turkey was stuffed to bursting, an extra portion was wrapped loosely in a square of cheesecloth and tucked into the pan alongside the turkey. The rich turkey fat sizzled round my little bundle, and when the cheesecloth was opened up, there was a crisp golden ball with a soft, spicy, fragrant center, all for me … The Christmas goose was stuffed with a special potato stuffing — creamy mashed potatoes full of chopped onions which had been simmered in butter, dried bread crumbs, two beaten eggs and lots of sage and thyme, salt and pepper and the cooked giblets, chopped very fine … The roasting was done in the hot oven of the coal stove. All of the drafts were opened up and the oven was tested with a piece of white paper; the exact minutes necessary to brown the paper were carefully computed. Who needed an oven thermometer? The roasting was carefully watched, for the goose fat had to be spooned off several times as it cooked off. It mustn’t be allowed to burn, for it was kept to be mixed with camphorated oil and rubbed on chests when we had coughing cold.

Sometime next week I’ll post Mrs. Rudkin’s version of her grandmother’s recipe for the turkey stuffing she describes here. It’s quite simple really, and will possibly give slightly better results than using Pepperidge Farms’ prepackaged version simply because you’ll be using fresher ingredients. She also suggests quite a few variations, so you’ll likely find something you might like.

The rest of the wonderful autobiographical portions of the book are also in this kind of delightful and descriptive narrative. This is a book I seriously enjoy just sitting down and reading. Even the recipes are cool to read. The book as divided into sections related to Mrs. Rudkin’s life, such as growing up in Ireland, starting Pepperidge Farm in New York, and also includes a chapter of recipes and notes from antique and ancient cookbooks in her own collection. From a book published in the year 1475 in Venice comes this interesting recipe for Pumpkin Pie, which was apparently supposed to also have an upper crust:

Shred well-cleaned pumpkins and, as with cheese, let them cook a little either in heavy juice or in milk. When partially cooked, pass it through a sieve into a pan, as, I said first, for cheese.

Mix together a half-pound of sow’s belly or rich fat boiled and beaten with a knife, or in place of these, if you wish, the same amount of butter or liquamen; a half-pound of sugar, a little ginger, some cinnamon, six eggs and two cups of milk with a little saffron.

This dessert will be rich with a good crust only if cooked above or below a slow fire.

There will be those who add pieces of leaves in place of the upper crust and call the dish lagana. When cooked and put in a dish, sprinkle on it sugar and rosewater.

Cassius, who was bothered by colic and stones, did not eat this. It is difficult to digest and nourishes badly.

Of course, her own recipes are simply amazing in that they’re classics from the beginning. To start, here is Mrs. Rudkin’s recipe for a simple loaf of white bread. And don’t forget, I’ll post her stuffing recipe next week. You might just want to bake a fresh loaf of this bread for it …

Preheat oven to 400 degrees F, 20 minutes before loaf is ready to bake.