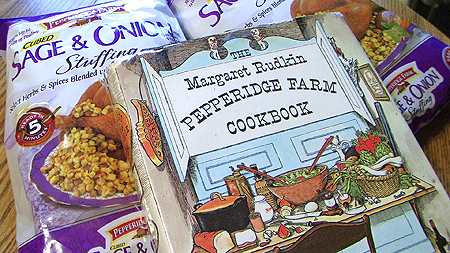 When I picked up Margaret Rudkin’s autobiographical “Pepperidge Farm Cookbook” from 1963 at an antique shop back in March, it was with hopes of finding some of the company’s original recipes.

Mrs. Rudkin, it turns out, did not disappoint.

My maternal grandmother used to make a seriously-good sage & onion stuffing. Grandma Liske probably did as well, although I was born a few years too late to find out. It seems to be a perennial favorite, with numerous variations appearing on my plate from various cooks throughout my lifetime.

The Pepperidge Farm pre-packaged version is by far the closest I’ve found to the from-scratch stuff … ing I’d enjoyed all those years. This year, after finding the original recipe for this stuff … ing on page 30 of Mrs. Rudkin’s book, I’ve been all gung-ho to finally make her grandmother’s version this year. She wrote about it in such a way that had me craving some:

Turkey time at Thanksgiving was a great treat — not because of the turkey, to my mind, but for the stuffing. I was so crazy about the stuffing that after the turkey was stuffed to bursting, an extra portion was wrapped loosely in a square of cheescloth and tucked into the pan alongside the turkey. The rich turkey fat sizzled round my little bundle, and when the cheesecloth was opened up, there was a crisp golden ball with a soft, spicy, fragrant center, all for me.

There it is … me wanting one of those same balls of freshly-roasted stuffing.

But dagnabbit … now I’m sick. Flu-bug, or some such nasty thing.

Hense the bags you see here of the commercial goods, which according to Mrs. Rudkin should still have been derived from her grandmother’s method.

Maybe I’ll make the original for Christmas dinner. That is, if I don’t have pneumonia or something. 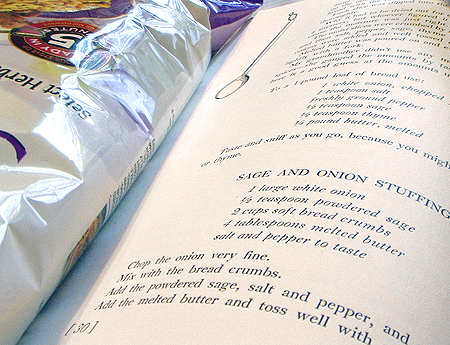 Of course, Mrs. Rudkin also dealt with the age-old problem of dealing with grandmothers who simply knew how to cook:

My grandmother didn’t use any measuring spoon for the spices — she gauged the amounts by tasting and sniffing.

Doesn’t that just drive you nuts? “Grandma, can you show me how you make that?” “Certainly dear, but I never measure anything.” “Well gee grandma, how the HELL do you do that then???”

Mrs. Rudkin talks about something else that’s quite similar, part of her learning about this stuffing recipe:

When the big day came, the kitchen table was cleaned, a bowl of cool water was placed on one side, a large empty bowl was placed on the other side, and in the middle were thick slices of dry bread with the crusts removed.

Each slice was dipped into the water and then squeezed out thoroughly.

Why it had to be dried out for days and then wet again was a mystery, but whoever figured it out was mighty smart because the moisture was just right.

It’s a grandmother, Margaret. No explanation will ever be given. It’ll just drive ya’ knuts.

The moist slices were crumbed by rubbing between the hands, and then salt, pepper, sage, thyme and finely chopped white onions were added and tossed well together.

Melted butter was poured on and everything tossed together lightly with a fork.

This then begs the question; Why, when this process, and the recipe at the bottom of the same page (shown above) both use crumbs, do today’s pre-packaged stuffing mixes, including Pepperidge Farms brand, use cubes of dried bread?

In a bakery you never know exactly how many loaves to bake, so you are almost sure to have some left over after the orders are filled.

I remembered how much I loved stuffing, so I decided to make some from the extra bread.

But fresh bread crumbs have a certain amount of moisture and will not keep long without molding.

A dried product which could be packaged seemed to be the answer, but there were problems galore. We had to find a way of drying the product and still keep the aroma and flavor of the herbs. We finally solved it by making a special machine for our Pepperidge Farm Stuffing.

The packaged stuff … ing is like the original, her grandmother’s recipe. Only different.

For a very good reason

The first recipe below is what Mrs. Rudkin developed as a measured and simpler version of her grandmother’s recipe for Sage & Onion Stuffing, with the bread crumbs intact. The second recipe is one of her many ideas for Thanksgiving leftovers; Turkey Loaf. One of these days I’ll see how this turns out. Sounds pretty darn good to me. Anyone have scissors? I gotta get these bags opened …

Chop the onion very fine.
Mix with the bread crumbs.
Add the powdered sage, salt and pepper, and mix well.
Add the melted butter and toss with a fork.

For the sauce:
1 can cream of celery soup
3/4 cup milk

Mix together all the [first eight] ingredients in order as listed.
Turn into a greased loaf pan, 9 by 5 by 3 inches.
Bake at 375 degrees F for 30 to 40 minutes until firm.
For the sauce: Blend the cream of celery soup with the milk in a saucepan.
Simmer for about 2 minutes.
Pour over the loaf.