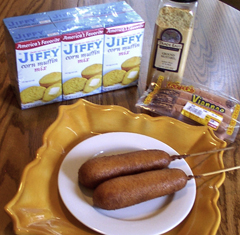 I like corndogs. In fact, I absolutely love them. I always have and probably always will. It doesn’t matter if they’re the frozen variety, as I can eat those just as well as the ones that are handmade. But when it comes right down to it, the handmade ones are certainly better.

This picture isn’t quite right, as squiggles of mustard are difficult to manage. Just imagine they’re there.

I had mentioned my love for corndogs early-on in Mary’s and my relationship, along with my wish for a deep fryer that was shaped correctly so I could actually make these little beasties. Granted, I’d never made corndogs before but I sure wanted to try. Not only was she curious as to how my corndogs would turn out, but she was more supportive of this idea than I could have imagined. Just prior to Christmas 2005, during a trip to Wal*Mart, a rectangular GE deep fryer landed in the cart as an early Christmas present. I was definitely on-my-way.

The corndog I wanted to make was more specific to Michigan than the frozen corndogs most grocers carry. I wanted to use locally-available ingredients of a better quality than what most people were used to. Having grown up in Flint, I knew the meat portion of the corndog had to be a Koegel product, specifically their Viennas in natural casings. These have always been my favorites whenever I’d have a Flint-style coney, and it made sense to make a corndog with them.

The simplest-possible corndog batter is the same as the batter for a corn muffin or cornbread. If you’ve ever been to Chelsea, Michigan, you’ve probably seen the massive silos plastered with the Jiffy Mix logo. This plant is the Chelsea Milling Company, the only place Jiffy products are made. You can take a tour of this plant, and have the whole manufacturing process and history explained to you. It’s a great place to take Scout troops and other small groups, which I’ve done more than once.

I like cornbread, but have never made it from scratch. Jiffy Corn Muffin mix cooks up extremely well, and is cheap enough that making this batter from scratch seems a bit of nonsense. And as Jiffy is a Michigan product, it works for this recipe.

Looking through some corndog batter recipes online, I found references to either prepared mustard or ground mustard. As the Jiffy Corn Muffin mix requires an egg and some milk for moisture, I went with the ground mustard. GFS Marketplace sells a nice ground mustard in a bulk container in their Trade East line, so that’s what I went with.

All I did to develop the Michigan Corndog was to make up a box of Jiffy Corn Muffin mix. Once it was mixed, I added enough ground mustard till it tasted right. That was it! 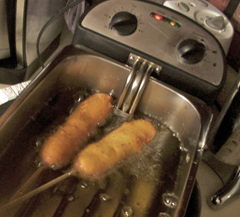 There was the matter of a cooking technique. Commercial corndog fryers are tall, and hold the corndogs vertically while cooking. And while home corn dog fryers that used to be available also fried them vertically, those appliances are no longer made. I couldn’t cook quite so many in my deep fryer as the corndogs would float horizontally, but I also wanted to use it for fish, chicken, onion rings and other recipes as well so I didn’t want a “real” corndog fryer. I could lay three decent-sized corndogs in my fryer, and that seemed fine.

In making the corndogs for the first time, I first found I had to wipe any moisture off the hot dog before dipping it into the batter or the batter would slide right off. But even worse, when I deep-fried them, the batter ended up with massive air bubbles which expanded as the cooking progressed.

We ate some rather mutated corndogs that day …

The batter has to rest, the longer the better, before even beginning to think about starting the deep fryer. We’re talking at least two hours here, but preferably overnight in the fridge. This lets any air bubbles settle down, and gives the cooked corndogs a nice, smooth finish.

After Mary and I decided the corndogs were good enough, the real test was the kids. My Briahna does not like cornbread … unless it’s crumbled into milk and sugar added, to be eaten for breakfast. And Mary’s John is an exceedingly picky eater, with the cheapest possible corndogs being some of his favorite things to eat. The results? As small as she is at the age of 12, Briahna can easily eat four of my Michigan Corndogs at one sitting. And if I make them with the bulk package of cheap hot dogs from GFS Marketplace (sometimes $6.99 for a package of 50), John can also put away four of them if not more.

During the 2006 City Wide Yard Sale here in Luna Pier the first Saturday in July, I cooked corndogs to-order in the driveway, with the deep fryer on an old kitchen cart. We sold 50 of them for $1.50 each (yup, I was using that 50-pack package from GFS instead of the Koegel’s). What was interesting wasn’t just the people that came back after having their first one. Rather, it was the people who were telling others, “Hey, you know that trailer over near the beachhouse where they have corndogs for $3? This guy’s are way better!”

But then an odd but happy accident happened. After the yard sales had closed down and it was time for us to eat, I realized I was a couple Viennas short to make enough corndogs for everyone at the house. But I also happened to have a couple on the grill. So I wiped those off, then skewered, battered and deep fried then.

Here’s where it got interesting:

What happened was quite an eye opener. The corndogs that were grilled first tasted far better than those that had been dipped directly from the package. The light dawned: The reason people don’t like corndogs is that the hot dogs aren’t cooked. They’re merely heated up inside the batter. Grilling them first changes the flavor and texture of the hot dot itself, giving a much better experience. Playing around with this concept proved that people who don’t like corndogs will like those where the hot dogs were grilled before battering.

Sometimes, what it takes is just a little extra care to make something taste that much better. Even something as simple as a corndog.