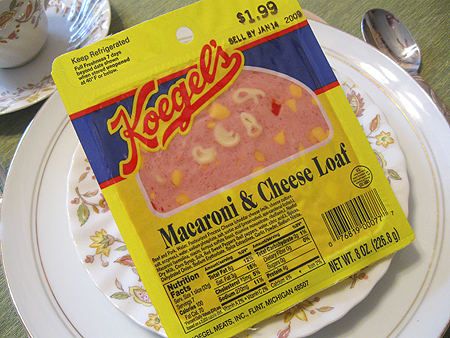 Macaroni. Cheese. Lunchmeat. It doesn’t get much better than this.

Something pinged in my brain earlier today when I read part of the comment Grit Magazine Editor In Chief K.C. Compton left on the post prior to this one. She had written in-part:

I’m trying to foment a Great Mac & Cheese Debate now as well, but after the holidays, people seem to be tapering off a bit … Maybe in February, as we all struggle to keep our strength up for the spring planting ahead. ;~]

I’ve been all week trying to figure out how to spring this little bit of Koegel’s weirdness on the folks of SE Michigan/NW Ohio. Thanks K.C. for giving me an opening! 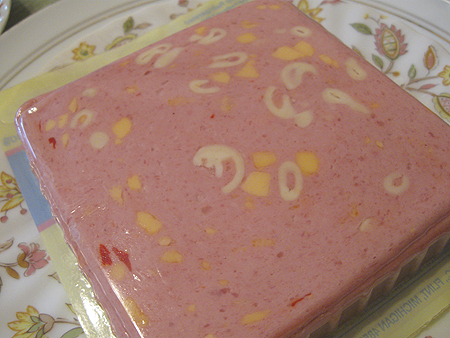 Briahna says that little thing near the middle looks like a lizard.

So here it is; Koegel’s Macaroni & Cheese Loaf. Like every other Koegel product I grew up on this stuff. Like just about every other pic of food on Luna Pier Cook in the past week this also came from Nehring’s Market in Burton, Michigan.

And like any other Koegel product I can eat this by the pound.

Myself, I love it. Whaddaya think? Be honest now …