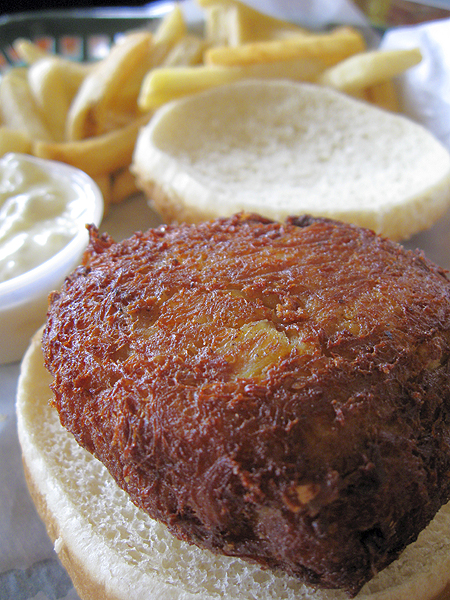 Update, September 29, 2014 – Here is a link to the current restaurant that’s at One Island on the bridge:

Update, June 6, 2009 – This post … well, it’s garnered a bit of attention since I posted it about a week ago. I don’t really know how people are finding it, but they’re finding it. And to be blunt, not everyone’s agreeing with what I wrote here. I won’t rehash my opinion in this update; I already posted it in the comments among both agreeing and disagreeing responders. However, I’ll approve any comment having merit while also not being insulting. So go right ahead and post your own opinion, negative or positive, on this particular restaurant. Y’ll kinda have me curious now! 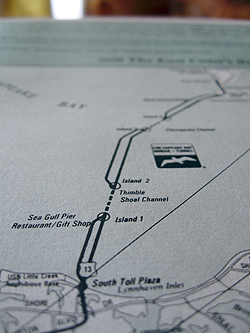 I’ve been avoiding posting this one. I don’t like talking badly about restaurants. But this one has irritated me, and I have to explain why.

When you’ve driven extra miles, more than 150 miles one-way from the hotel you’re staying at, to eat at a single restaurant that’s in the middle of literally nothing, on a man-made island of a project once listed as one of the seven engineering wonders of the world by the American Society of Civil Engineers … wouldn’t you expect to find the best Crab Cake Sandwich you’ve ever had, even if it was just for lunch?

I gotta tell you, I was sorely disappointed.

Granted, we weren’t disappointed with the Chesapeake Bay Bridge Tunnel itself. And there are a couple other pics you have to see at the end of this post. But frankly, the Filet’o Fish at McDonald’s is better than the crab cake sandwich you see here.

The $9.95 “Crab Cake Sandwich with french fries” at the Sea Gull Pier Restaurant on Island 1 of the Chesapeake Bay Bridge Tunnel wasn’t anything close to what I was expecting for either the price or the location. When the dish was delivered, it was exactly as it appears in the top photo; An overcooked (cooked at least twice the time it should have been) crab cake on an inexpensive (read, “cheap”) bun with a portion dish of tarter sauce and some slightly soggy fries. Not even a slice of lettuce there to put on top of it. Definitely nothing close to what a good Chesapeake Bay crab cake should be, is supposed to be, is expected to be, etc., etc., ad nauseum.

My real problem with this isn’t the dish itself. It’s how that poorly-made dish relates to those miles driven. People consistently travel long distances to see the Chesapeake Bay Bridge Tunnel, to drive those 20 miles of pavement 20 feet over the waters at the mouth of the Chesapeake Bay, to get off on Island 1 to see the fishing pier, visit the gift shop and eat at the Sea Gull Pier Restaurant. I know because I lived in Norfolk for over three years, and two of my kids were born in the area. And this was still my first visit to this particular attraction and Engineering Wonder.

My real problem is that this sandwich, and anything else served at that particular restaurant, should solidly represent the seafood of the Chesapeake Bay. Unfortunately, it does not do so, not by a long shot. Honestly, when I bit into the sandwich it was ok, and I was instantly suspicious of the meat being a Chesapeake crab cake from Phillips, which is a wonderful product. If so, that would have been the sandwich’s only saving grace, as Phillips is the way to go in many cases for decent seafood for this purpose. But even it it was, somebody had cooked the Hell out of it and served it up very amateurishly. The result was far from representative of what even that particular seafood supplier would want to see for that product.

Now, having said that, the real reason we went to the Chesapeake Bay Bridge Tunnel was for John: 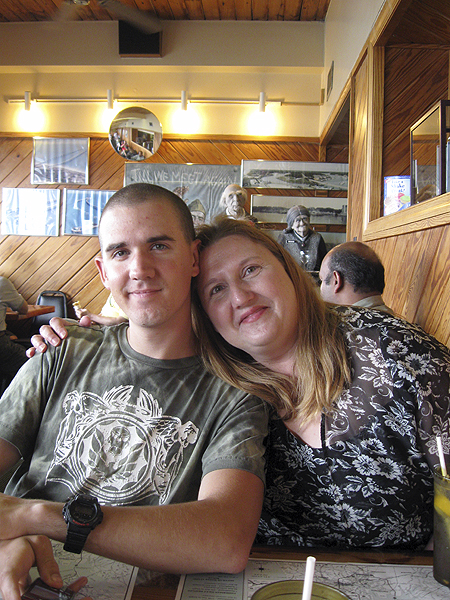 This is my stepson Pfc. John Winckowski, USMC, and his mom, my lovely wife Mary, at our table in the Sea Gull Pier Restaurant. Memorial Day weekend with a U.S. Marine. Yeah, that’s the ticket. 🙂 John loves watching the “engineering marvels” shows on various cable channels, so heading to the Chesapeake Bay Bridge Tunnel was something he’d looked forward to. I’m pretty sure he enjoyed the rest of our visit to that “enginering marvel”. 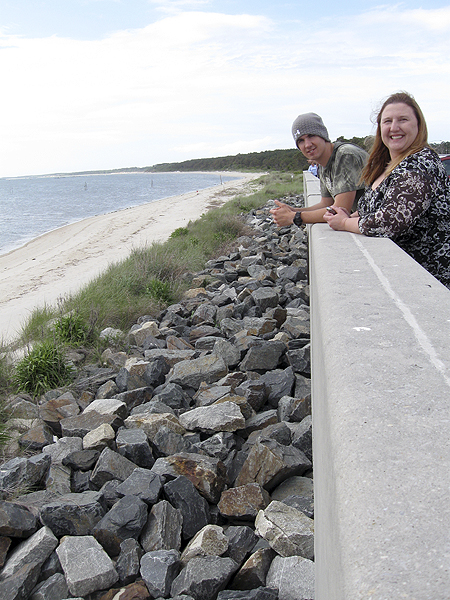 And for those of you who are fishermen or fisherwomen who want to fish the Chesapeake Bay without a boat, here’s a look at the fishing pier just outside the restaurant on Island 1.

But if you do fish off this pier, do yourself a favor; Pack a lunch. 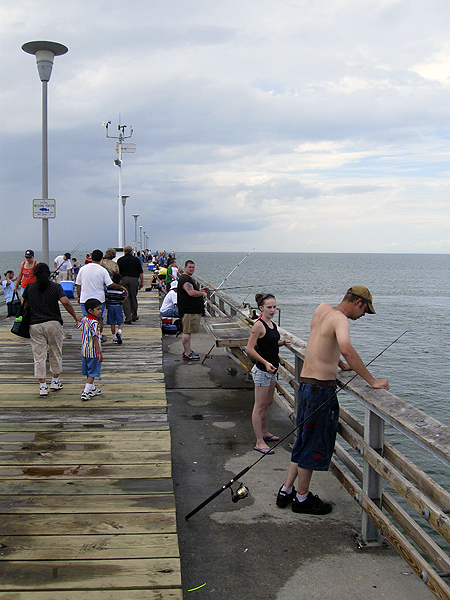