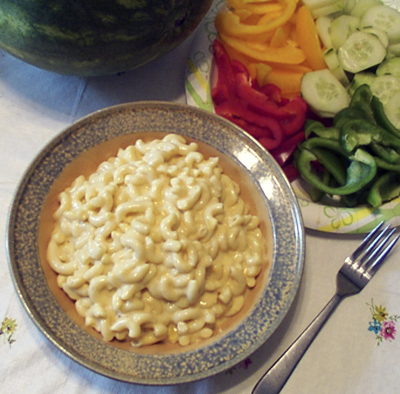 Our mom, who passed away on April 21, 2009, at the age of 79, had taken the time once to use a Brother word processor (a glorified typewriter with an LCD screen) to type up a lot of her recipes. Unfortunately, no one told her about the floppy disk drive so she could save her work, but I do have everything sheʹd printed in a three‐ring binder.

There are recipes she never wrote down, simply because she hit the wall of, “Oh, I never measure anything.” On May 27, 2007, she decided to make her well‐known Velveeta-based macaroni & cheese, something I like with plenty of Heinz ketchup on it. The whole family loves it, as do friends. Mom learned it from her own mom back in the late 1950s, and the recipe hasn’t changed.

But it was never written down, either.

Camera in‐hand, that Sunday I followed her every step, bugging the bejeepers out of her with my constant requests of, “Hold still, mom, you’re making it blur again.” (As Jimmy Neutron once said, “Sorry about your bejeepers, mom!”) That afternoon is where the photos in this recipe came from. After almost 50 years with mom, and decades prior to that with her own mom, after literally hundreds of friends and family have enjoyed the results, this popular and highly-searched‐for recipe is finally written down.

We hope you enjoy this dish as we have. 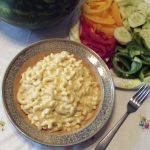 Yeah, yeah, I know, if you go ahead and use the other 4 oz. of Velveeta and the other 2 tablespoons margarine, it’ll probably be fine. But argue with mom about it? No way!!!