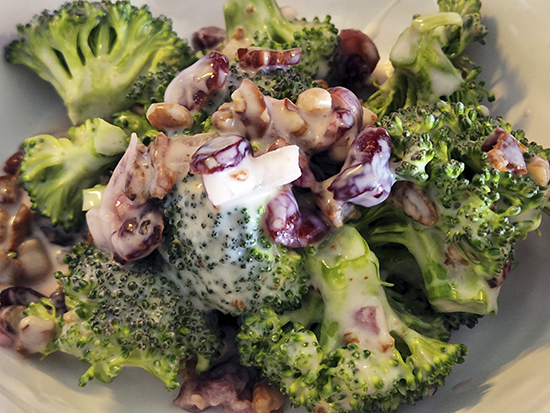 My late sister Janet, who passed away in June of 2018, was five years younger than myself. An avid cook, she had a few dishes in her repertoire that she was particularly well-known for. A few of those dishes became faves at family reunions, church potlucks, wakes, and other functions.

One of the dishes that was requested by people was her Broccoli Salad. A few weeks ago while having dinner with another family, that particular dish showed up on the table. I hadn’t had it since Janet’s passing, and when I tasted it, a flood of memories washed through my emotions. I honestly hadn’t realized how much that dish had meant to me until then.

For Easter 2022, Mary then decided to pull out Janet’s recipe for her Broccoli Salad to make for our kids and Grandkids. Our daughter Bree also made Mom’s Velveeta Macaroni & Cheese, while Mary then made Mom’s Old-Fashioned Peach Cobbler for dessert. With Adam also making Maple Bourbon Carrots and myself putting together my own BBQ Pulled Pork for sandwiches, it became more an old-school family potluck than what most would consider an Easter Dinner. It was certainly a meal that was both comforting and delicious.

This isn’t a recipe to be fussy with. Prep the veggies into a large bowl, make the dressing, then fold it all together. It really is that simple. And be sure to adjust the amounts, and what kind of ingredients you use, to your own taste. 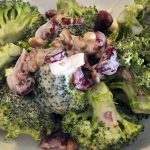