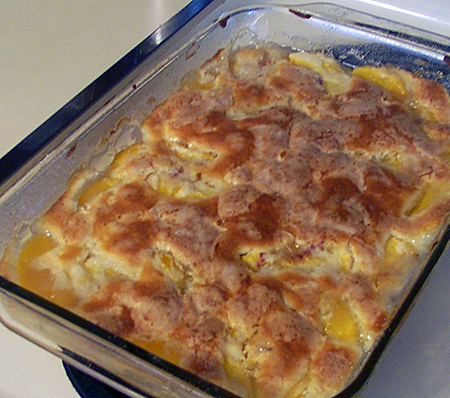 This image is almost three years old … and I never posted it before??

A couple days ago I was over at Shelby’s food blog reading her post describing her Strawberry Rhubarb Cobbler with Cornmeal Biscuit Topping. At one point Shelby wrote:

Next time I make this, it’s going to be with peaches, since peach cobbler and cornbread are mainstays of any good southern square, why not compact the two into a glorious, sweet, savory, crumbly dish of summer? Just replace the strawberries and rhubarb with some sliced peaches (I’d imagine about two-or-so pounds would do just fine, a few tablespoons of sugar and a tablespoon of cornstarch, bake the peaches a bit before topping with the biscuit mixture. Once topped, just bake as below for about 25 minutes.

I was thinking to myself, “That sounds good … use the filling from my mom’s 1930’s-era cobbler with Shelby’s topping. What a great idea!” So I came back here to point Shelby to the recipe.

I was totally dumbfounded. Searching my own blog for the recipe came up with … nothing! The recipe just wasn’t here. Mary was actually kinda flabbergasted; “Oh, I don’t even believe that!” Well honey, you should, because it’s true.

I’ve made this quite a few times over the past few years. In fact, the image at the beginning of this post is almost three years old. I know this because that year, 2005, was the first year Mary asked for this cobbler instead of the traditional birthday cake for her September 25th birthday. I made it a point to ensure that was one of the best batches of peach cobbler I’d made yet, not only to honor Mary’s birthday, but also so I could take a picture for the PDF version of the recipe. That’s where this photo came from.

Mom’s Peach Cobbler is actually simpler than the recipe makes it appear. Sure it’s a lengthy process, but the steps themselves are rather simple. This recipe has stood the test of time, from when my mom Joyce first started making it when she was a kid in the 1930ʹs (weʹre not quite sure who she learned it from), to my own kids making it themselves today. The kids do make mistakes in reading recipes (one young man once used 1/4 cup salt in this particular recipe instead of the specified 1/4 tsp salt in the filling), but thatʹs a good way for them to learn to pay attention to details.

One more thing: Obviously this cobbler tastes best when fresh peaches are used. Keep that in mind if you decide to make this using canned peaches. 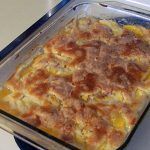 2 pounds of peaches? You might need just 6 or 8 whole peaches depending on their size. At Whole Foods Market in Ann Arbor, it only takes 4 of what they label as "conventional peachesʺ to get the 2 pounds. But be sure to actually weigh this!