Yesterday Sylvia Rector of the Detroit Free Press published an article promoting the fact that Meijer stores in the midwest are now carrying Hot Dog Chili Sauce from National Coney Island of Roseville, Michigan. Since a lot of what I do is all about Michigan-based foods, and of course hot dogs and coneys are high on that list, I had to head to the nearest Meijer to grab a couple of the bricks of sauce. Besides, both our oldest boys work at the southeast Michigan Meijer distribution center and we have to help keep them employed …

The National Coney Island web site does offer complete coney kits in a styrofoam shipping box, including buns and their own brand of hot dogs, and also offers the sauce bricks and hot dogs separately. But as per Ms. Rector’s article, Meijer is only carrying the sauce. According to their web site, National‘s hot dogs are, “Natural Casing Hot Dogs (the ones that snap !!!)” To get a similar action I picked up a package of my old coney standby, Koegel Viennas, which have a natural lamb casing. For the buns I grabbed an eight-pack of Aunt Millie’s brand which are used in many coney shops in this area.

When they decided to say this sauce is packaged as a “brick” I imagined it was packed like one of those bricks of coffee grounds in a foil wrapper. The reality is that the sauce is in a plastic tray with a plastic seal across the top having the artwork, nutrition facts and recipes printed on it. The two recipes are:

With a 1.5 lb brick of the Hot Dog Chili Sauce, you’ll end up with just over 2 lbs of “CONEY SAUCE”.

My previously-described definition of the “brick” package really would have worked well for this particular product. I dumped the 1-1/2 cups water into a pan, cut the seal off the package of chili sauce, grabbed a spoon, turned the package over, over the pot and … nothing. The sauce didn’t move. I squeezed the sides of the package a little to loosen it and it finally came out in a solid chunk. Yup, pretty much a brick.

I turned the heat on low and broke up the brick of sauce with the spoon. After about 5 minutes a lot of the sauce had softened up. However, as I’d not used a non-stick pan the sauce started to harden on the bottom of the pot fairly quickly. I’ll use a non-stick pot next time to solve that problem.

It took about ten minutes for the sauce to soften completely, at which point I set the burner almost off just to keep the sauce warm. The consistency of the sauce is quite good. It’s not almost puréed like some commercial sauces are. There are good chunks of actual meat in there, giving it a nice body, and it has a great color as well.

I grilled up some of the Koegel Viennas, nuked the buns a bit and put the whole of it together. 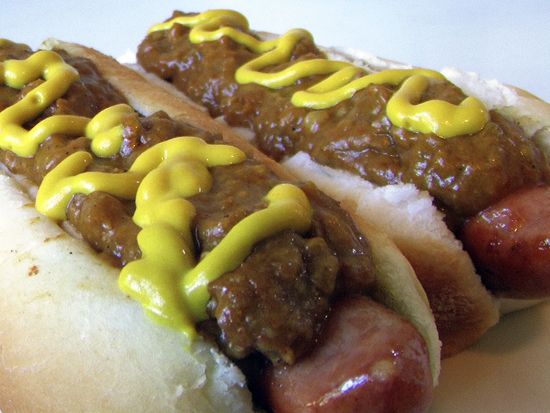 This is a very mild hot dog chili/coney sauce. It’s a nice compliment to a full-flavored hot dog. Our opinion is that the National Coney Island Hot Dog Chili Sauce is very reminiscent of an old-style diner coney sauce, the kind of thing you’d get at the counter of a place that might have had a real soda fountain at some point. This isn’t a Flint-style, Detroit-style or even a Jackson-style sauce. The National Coney Island Hot Dog Chili Sauce is it’s own thing, and that’s what makes it good. I can easily see myself topping this sauce with a bit of raw sauerkraut the next time I serve it.

Thanks, Meijer. We’ll certainly be back for more.