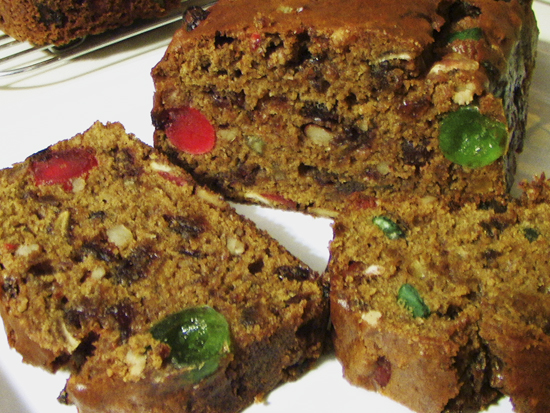 Scott Lee is an old friend of mine. Not that he’s actually old … he’s as middle-aged as I am, and slightly older by a few months. But Scott’s been around most of my life. We met in art class in 6th grade, spent time studying magic and illusions for a while, transitioned into those funky tube stereos and big speakers in the late 70s and early 80s, and because of the physical distance between us since have basically hung out off-and-on only whenever possible.

Throughout the 1970s and into the mid 1980s my own mom would make hundreds of decorated sugar cookies at Christmas and spread them throughout the neighborhood, including sending batches over to the Lees’ house. Scott’s mom Sharron had a similar but slightly different tradition. Sharron would spend the time to make dozens of fruitcakes and send them off to family and neighbors, including us. And I mean … dozens … of fruitcakes. Scott and I discussed this this weekend and we estimate she’d make an average of 50 of those fruitcakes each year, with each one being intended for a different family. 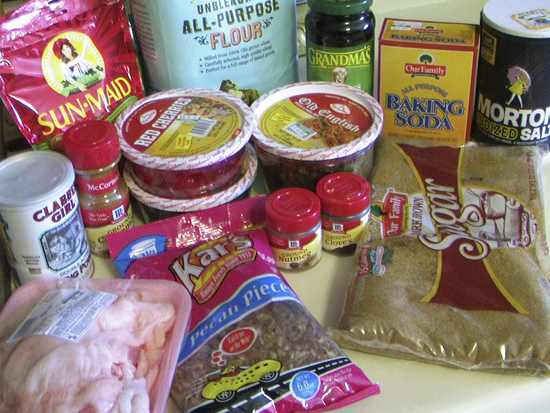 One rather interesting aspect of these particular fruitcakes from Sharron was their texture. They were never what is considered to be your normal fruitcake. There was never the thought the following year of, “Joyce, we’ll just put another coat of varnish on the cotton-pickin’ thing and give it to someone else!” Sharron’s fruitcakes were actually good. People tended to indeed eat them.

When Mary and I got together six years ago she found it odd that there were fruitcakes out there I considered not only edible but good-tasting as well. Sharron’s fruitcakes were where that knowledge had originated, spreading to some (very few) commercial fruitcakes over the decades.

Having always been enamored by these fruitcakes, a couple years back I asked Scott if he had any idea where that recipe was. Sharron had previously passed away and I imagined one of Scott’s sisters or his brother may have ended up with it. But oddly enough, Scott told me that even though he doesn’t cook whatsoever (never has, never will) he had been given all his mom’s recipes. Digging through them he actually found it.

In March of 2009 he scanned the typed page of notebook paper and attached it to an email. 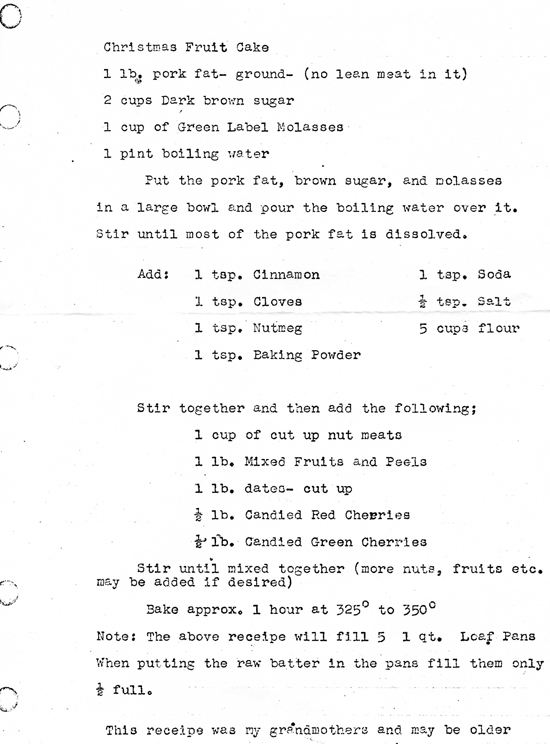 I took one look at that second line and about died laughing.

It’s absolutely true. Everything is better with pork fat.

Since receiving the recipe itself from Scott almost two years ago, I’d been wanting to go ahead and recreate what Sharron did to some degree. As it says at the bottom of the page, “Note: The above receipe will fill 5  1 qt. Loaf Pans”. Sharron would obviously make an average of 10 batches each year, starting probably just after Thanksgiving and continuing for the next few weeks. I knew I didn’t want to do this much. Five loaves seemed fine.

But I always found some reason to put it off.

However, in the past couple weeks this bug has bit hard and I felt I needed to do this before Christmas of this year. So yesterday with Adam and Ryan in tow, I bit the bullet and went shopping.

We happened to be in Lenawee County in southeast Michigan so we went to one of our favorite groceries there, the Country Market on Maumee Street on the west side of Adrian.

The first thing we noticed was how expensive good fruitcake is to make. The two 8 oz containers of the green and red candied cherries were $5 each. The 1 lb container of mixed fruits and peels was also $5. The nut meats, depending on what we decided to use, was anywhere from $5 for walnuts to $10 for pecans per pound for the fresh ones.

The reality is that, even if you don’t get everything absolutely fresh, these five fruitcakes are going to run about $6 each, which is what we spent: about $30 total. In the 1960s and 1970s when Sharron was making these fruitcakes full-bore, I imagine the total per five fruitcakes was still 10 – $15. I never realized how much she had spent on this annual project.

The cheapest item was the pork fat. 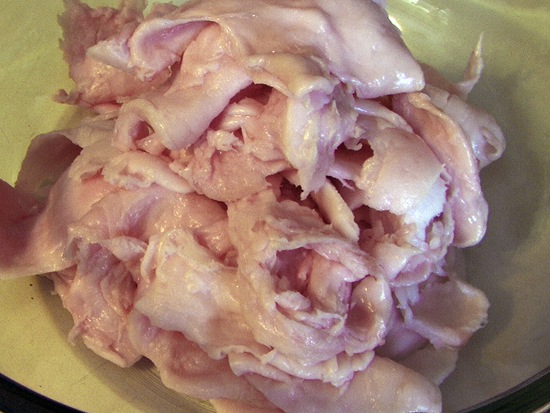 There was no pork fat in the meat case like there normally is at Country Market, over by the fresh pigs’ feet and pork livers. One of the butchers went into the meat cutting room and retrieved this fat for us from a number of cuts. The label he put on it had it at 31 cents/lb.

When shopping for the ingredients we had to figure a few things out. The “nut meats” we assumed to be walnuts, but looking at commercial fruitcakes in the store we found references to walnuts, pecans and almonds. While the walnuts were less expensive, pecans have a much better flavor so that’s what we picked. Almonds just didn’t seem right at all.

“Green Label Molasses” seemed rather odd but also kinda familiar. Looking in the area of the syrups we found the Grandma’s Molasses brand has a product with a green label, which is their hardier and less-sweet “robust” variety. This sounded appropriate for Sharron’s fruitcakes so that’s what we got.

And while we could have gotten fresh dates and chopped them, we went ahead, wimped out, and bought the Sun-Maid pouches.

For the flour, when we were in the DC area over Labor Day weekend I ended up with a reason to go to Trader Joe’s to pick up a bag of their unbleached all-purpose flour. As this bag was still in the freezer we decided the fruitcakes would be a good use for five cups of it.

Back to the pork fat: When discussing this recipe with butchers at Country Market and our friends at Kilgus Meats they’ve mentioned it would probably be alright to use suet or even lard in place of the ground pork fat. But I wanted to remain as true as possible to what Sharron did so I insisted on using pork fat. One issue I ran into though was that, once we started making the fruitcakes, I found the one pound of pork fat didn’t go through Mary’s mom’s hand-crank #10 meat grinder all that well. It took probably 30 minutes of cranking forward, cranking back, then forward, then back, over and over and over again, until all of it was either ground or, as it turned out, slowly puréed. Next year I’m most certainly asking the butcher to grind it … 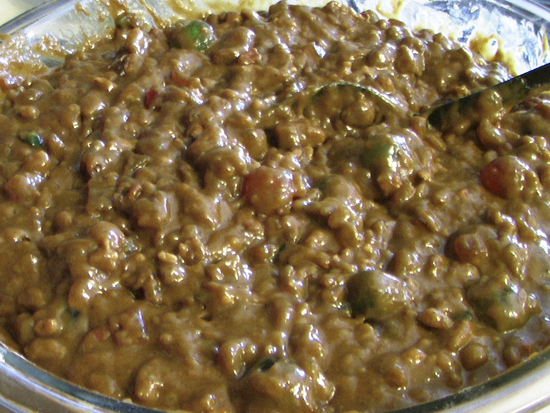 Once the pork fat was ground and the oven was set to preheat at 325 degrees F the rest of the recipe flew by rather well. Adam and I were concerned the pork fat wasn’t melting correctly when we poured the boiling water over the fat, molasses and brown sugar. The pork fat broke up faster with a whisk but I made the mistake of touching the bottom of the bowl with the whisk and ended up with a lot of molasses/pork stringiness in the end of the wires.

One major issue is that the mixture becomes considerably thicker the more it’s stirred. Once the flour is added the density begins to build almost exponentially. This continues as the candies and nuts are added and more and more ingredients are folded in. I ended up reaching for a stronger and larger mixing spoon. It became obvious to us the recipe needs to be re-worked in an effort to point this issue out and to end up with a lighter and less-dense fruitcake after baking. Mixing the fruits and nuts separately and then gently folding them into the mixture would probably help. 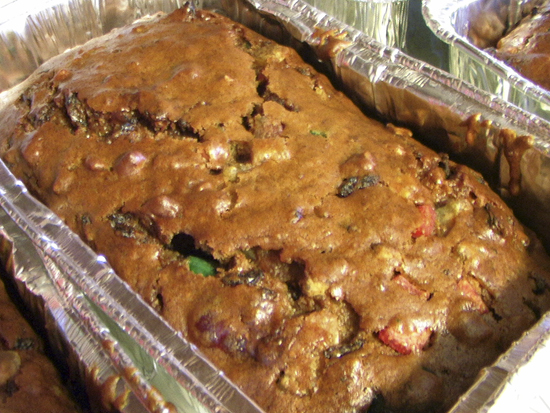 Another interesting discovery is that, once the fruitcakes are removed from the oven, unless they’re refrigerated (and largely because of their density) they are quite hot for a couple hours and continue to cook. Testing these fruitcakes for “doneness” with a toothpick or butter knife is completely pointless. Just take them out after an hour, put them on the cooling racks and leave them alone till they’re cool.

Finally, these quart-size foil pans are great for these fruitcakes. I just gave each one a couple flexes and the fruitcake would drop right into my hand. Perfect.

I have to commend Sharron Lee for her tenacity in making so many batches of these fruitcakes over the years. I’m not sure when she started but I remember starting to receive them early in the 1970s. Scott estimates his mom stopped making these in the mid 1980s when his youngest sister finished high school and went off to college. The fruitcakes were quite a beautiful, time-consuming and yes, expensive, thing for her to do for the people who received them, the people she really cared about. Hers are the kinds of real Christmas traditions that last as memories forever.

Preheat an oven to 325 degrees F. Put the ground pork fat, dark brown sugar and molasses in a large mixing bowl. Slowly pour the boiling water over the other ingredients and stir until most of the pork fat is dissolved. It’s best to start with a spoon, then continue with a whisk, ensuring not to touch the whisk to the bottom of the bowl.

In another bowl sift the dry ingredients and spices together and ensure they are well incorpated. Gently mix them into the wet mixture until everything is just blended. Don’t mix it too much or it will become thicker and more dense.

In yet another bowl mix the nuts and fruit together without breaking them. Fold them gently into the batter.

Spoon the batter into five 8″ x 3-3/4″ (one-quart) loaf pans, making sure to only fill the pans halfway. Bake them in a 325 degree F oven for one hour but no longer. After one hour of baking remove them to cooling racks, where they will continue to cook inside as they cool for a long period of more than an hour.