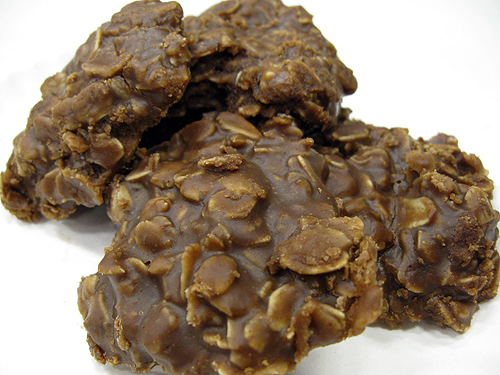 Mary’s fingers were almost in this shot, waiting to grab a cookie as soon as I was done.

These things have started showing up, more than they ever had before. Amanda V. proudly pointed out a batch in June at her high school graduation open house, explaining that it took forever for them to set up in the heat and humidity. I regreted not taking a picture of them then, but for some reason it slipped my mind. Probably an age thing on my part …

This batch of Aunt Mabel’s Chocolate-Oatmeal No-Bakes showed up yesterday at the annual Saeger family reunion up in Millington, Michigan. They were in a plain Ziploc bag, not even on a plate, and these are the few I was able to salvage out of the crumbs for a photo. I have no idea which of my relatives made them. With over a hundred people there and some already having left when the bag appeared, there was no way to find out who had made them.

But they were good. Just about perfect. Just like mom used to make.

Mom made these for me until late last year when it became apparent she was no longer up to such things. As these have always been my all-time favorite cookies, she made sure I had a regular supply of them. They showed up at my apartment in the early 1980s in Columbus during college. After my first marriage got going they still showed up at the house. During my Navy stint boxes of these cookies were sent to avionics school outside Memphis, calibration schools in Norfolk and outside Denver, and to the ship in the Persian Gulf.

In 1992 in the Gulf, one such box arrived at the aircraft carrier’s calibration lab in a Ziploc bag. A hole about an inch in diameter had been bored into the box, into the plastic bag they were in (which may have had a hole in it to begin with), and straight through the cookies. Somewhere in Europe, a mouse had probably died happily from severe sugar shock and chocolate overload.

As I said, Chocolate-Oatmeal No-Bakes still showed up by the dozens right up until late last year. Mary’s fallen in love with them as I have. But unfortunately, I have yet to make a batch of my own. Maybe I’ll make a batch for Christmas? It’s about time I think.

Some people say these cookies look like small piles of poo. Too bad for them. I’ll eat the things anyway even if they won’t.

Aunt Mabel wasn’t actually a relative. (Amanda V’s not technically a relative either, but my kids thought she was an blood-relative cousin until just a few years ago.) Mabel was proof of my dad actually walking to school four miles each direct in the Flint winters. Not dressed well-enough, dad passed out in a snowbank in front of Mabel’s house when he was about 12. He’d have died in the cold if he hadn’t come-to in her and Fred’s living room with his feet in warm water, meeting Fred and Mabel for the first time. After that, he was a regular and almost-daily guest in their home. Mabel the Card Shark came to live with us in her final years in the 1980s, beating mom and dad at Gin Rummy while wearing that green dealer’s visor.

And she kept trying to trip me with that damn cane …

As the name implies, Chocolate-Oatmeal No-Bakes do not require baking. And their set-up time and final consistancy is dependent on atmospheric conditions. But really, if you love someone or have kids who like chocolate, this is a serious go-to recipe for making some happiness. 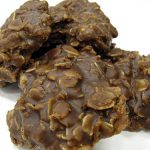