With page views on this blog ramping up, I'd like to point out a dozen recipes which are more quarantine-friendly and more fun to make than some of the more complex recipes. Many of these are also good examples for teaching kids about cooking.

When shopping for items, remember to maintain social distancing, and wash your hands when you get home before putting groceries away. 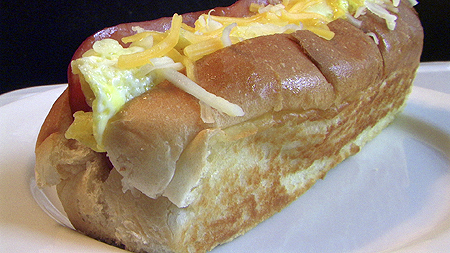 This turned out to be darn good. Click it to see it better.

After the kids and I played around with the grilled hot dog buns this past Sunday, I got to thinking about other foods that could go into it besides hot dogs and seafood. One dish that piqued my interest ended up being a simple fried egg sandwich. I have mine on toast, so it stands to reason it would also taste good on a bun, a bun that had the flavor and texture of the bread on a grilled cheese sandwich.

I’ll tell you what, the first attempt was a bust. Literally.

My fried egg sandwiches have two eggs in them. Since I was also adding ham to this version, I used one deli slice of ham. After grilling the bun, I laid in a slice of grilled ham, and tried topping it with a couple eggs I’d scrambled.

The bun promptly split along the bottom.

Aaron (aka Teen Tech) ate the first one anyway. While it was messy, he did say it was really good.

This turned out to be a simple sandwich, but with a couple quirks in the technique. What worked, i.e. what you see in the above image, is this:

When one side of the bun is done, flip it over. Add a tablespoon of oil to the smaller skillet. When the oil is heated, add the egg, seasoning it how you like it.

When the bun is almost done, leave it in the pan but remove the pan from the heat. :ay the ham next to the bun so the ham will heat through.

When the egg is almost fully cooked and has just a little raw egg left, flip it over and remove it from the heat.

I could easily eat two of these. Why not? I eat two hot dogs normally. I can also see some nice options, such as replacing the ham with a single strip of crispy bacon, or laying in a narrow strip of grilled steak and maybe a cut slice of mild cheddar. Or … lay in a slice of southwest marinated sirloin, and top with a line of salsa, some sour cream, and shredded cheddar. Or … lay in some thinly sliced smoked salmon, and top the egg with a mix of sour cream and dill. Or … lay in some sliced tomato instead of the meat, along with some good meunster, and top the egg with a traditional raw sauerkraut. Or …

I think you get the idea.