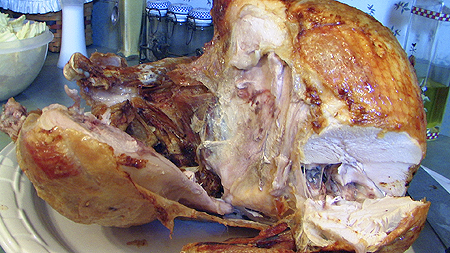 One thing I’d never had in my whole life … well, at least since it’s become popular … is deep-fried whole turkey. No, not the whole turkey … I can’t eat that much … well, maybe … anyway … I digress. 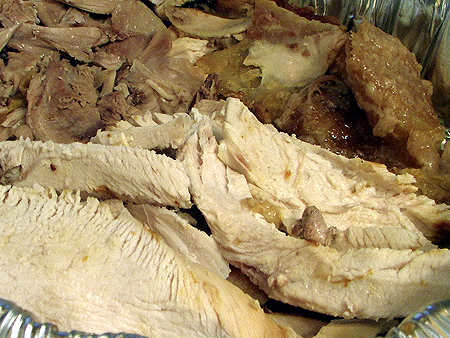 Yesterday I was finally able to enjoy some fresh, hand-dipped, deep-fried turkey! And it was good!! I’d always thought it’d be a bit weird, maybe a touch on the greasy side, possibly missing that “something” that makes for an excellent roasted turkey. You know, the kind you get at the Turkey Roost up in Kawkawlin, Michigan, slow-roasted for hours and served within minutes of your ordering it since it’s, like, already perfectly done.

Yesterday for Mary’s Aunt Betsy’s 80th birthday, Mary’s cousin Steve deep-fried a turkey in his garage./ Ok, so the deep-fryer was in his garage … really, it’s a pole-barn that’s built to be a garage … there’s a funky butterscotch Chevy Nova in there … 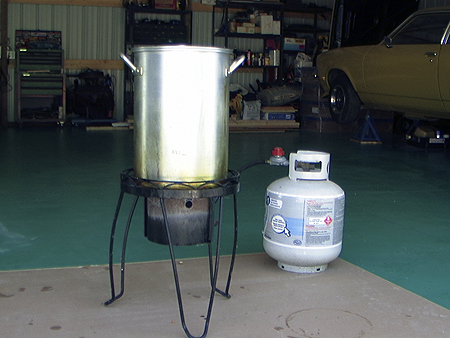 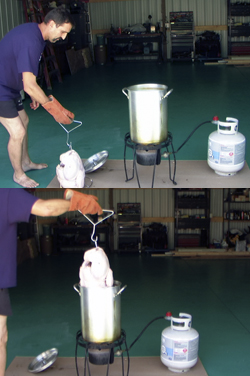 By the time we got there just before 2 p.m., Steve had the whole assembly set up. The turkey deep fryer had come from the Cabela’s store in Dundee, Michigan. They have an incredible selection of various types and sizes of deep fryers in the store, including specific ones for fish, turkey and other “designed-for” uses. The majority are intended for outdoor use and, like this one, are powered with a simple LP gas bottle you can get just about anywhere. Steve had placed the deep fryer near the open garage door on a large piece of drywall to protect the floor. With the turkey mounted on its spit/base and the wings secured using the twine that had held the legs together, he’d added enough cold peanut oil to the pot to cover the bird by an inch or two. He’d then removed the turkey, wiped the oil off it, then preheated the oil to 375 degrees F. There’s a lengthy InstaRead thermometer hanging through a hole in the fryer’s lid, making this a simple temperature to adjust to.

At 2 p.m. Steve began the process of lowering the bird into the pre-heated oil. This is downright dangerous!!! The turkey has moisture all over it, throughout the inside and, as this was a Butterball turkey, within the meat itself. Steve mentioned the oil might explode if something went wrong, and as I’ve seen it happen I know what he means. With his welder’s glove on it took Steve a whole 5 minutes to lower the turkey into the violently-bubbling oil. 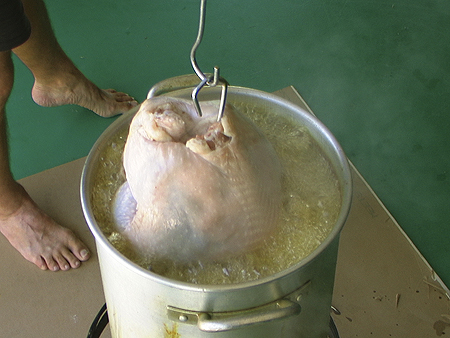 Now … yes … we know … BARE FEET????? If something had gone drastically wrong, if the bIrd had slipped off its rack and dropped right in, those feet would be in a burn ward. GET SOME FRIGGIN’ SHOES ON!!! 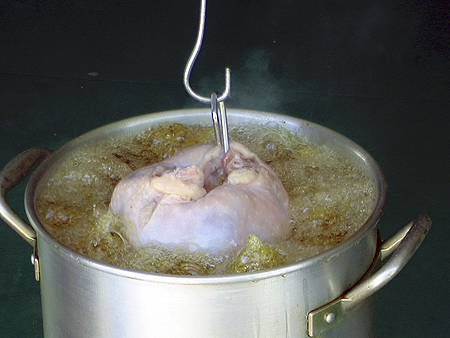 Simple physics: As the bird goes in, the oil level rises. This was a big bird, so the oil was about as high as possible as the dip was finished. Be patient, and don’t hurry. Oh, and wear shoes … 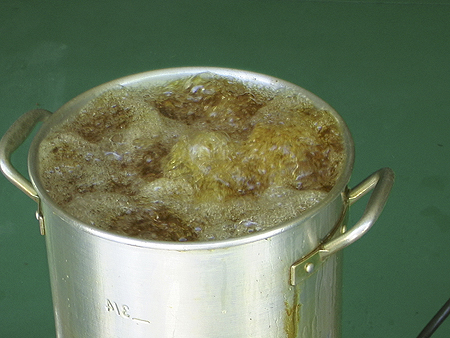 After the 5 minutes it took to get the bird into the oil, the oil will still bubble as the moisture level on the bird itself subsides. Gently place the lid on, with the thermometer in the oil. 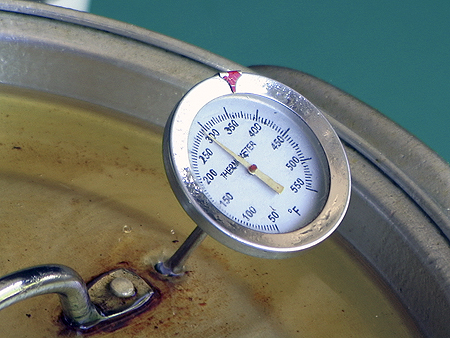 The temp of the bird itself dropped the temp of the oil to about 300 degrees F for the one-hour duration of the frying. This is one reason people like to deep-fry turkeys: It doesn’t take all day. One hour, tops. 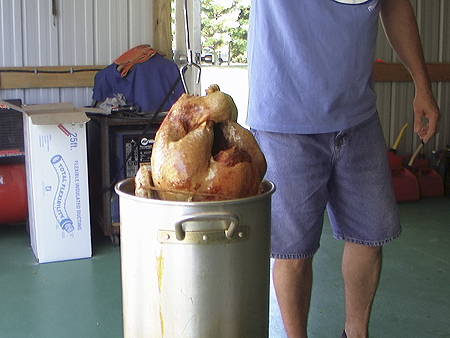 Removing the golden-brown turkey from the oil at 3 p.m. took much less time than it took to put it in. You still need to be careful though as the hot oil will drip. Jabbed into the cooked bird, the thermometer showed 200 degrees F internal temperature for the meat. So, maybe 45 minutes next time. 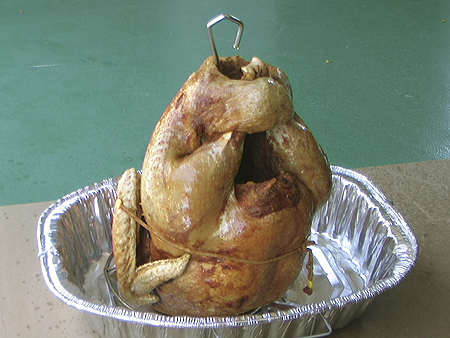 The fried bird was placed in a foil pan on the drywall to drain and rest a bit before being taken into the kitchen to cut. That crispy skin is an amazing treat, and needs to be eaten as freshly as possible. Especially the stuff at the bottom of the bird where it had cooked the longest.

Thanks, Steve, for a great turkey meal!