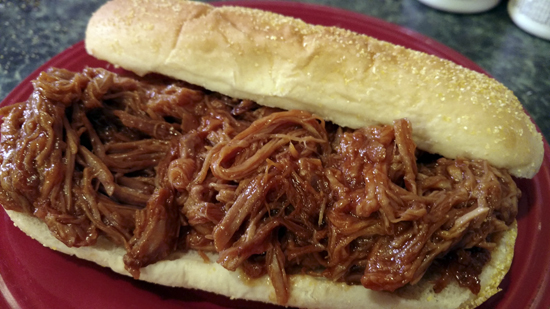 With Mary being a travel nurse now, and the two of us moving around the country on a regular basis, we have plenty of opportunity to feed other people. We occasionally feed not only the people we stay with, but more often we feed the staff she’s working with in a given facility. In the previous post and recipe I included an image of the Chicken Noodle Soup I’d made for her co-workers in Gallipolis, Ohio. Now a few months later, after making BBQ Pulled Pork for her co-workers in Cody, Wyoming, one young lady asked me for the recipe.

Looking through this blog and my other sites, it dawned on me I’d never posted this particular recipe. I’d posted a few versions along the way using specific ingredients … But as far as my “generic” recipe went, the procedure I use most often, it was nowhere to be found.

What’s most interesting to me about this recipe is really how simple it is. There is very little preparation involved, and once it gets going it basically takes care of itself. You only need to keep an eye on it from time to time to make sure it’s progressing nicely, accomplishing a few tasks to help it on its way. 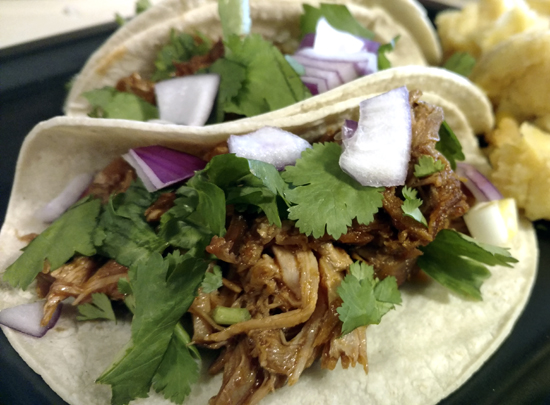 I use this recipe for many reasons and in varying amounts. At home, most batches weigh less than 10 lbs and will sometimes last almost a week. But for larger groups I’ve made catering batches that sometimes weigh almost 30 lbs. On occasion there are leftovers from those batches and we’re able to bring some home. But in other locations, when I go to pick up the crockpot or other serving vessels, there is nothing left for later.

BBQ Pulled Pork can be served in many ways. Most times I’ll simply provide buns and plates, as well as bowls and forks for those diners who would rather forego the buns. Lately I’ve also been including a bowl of good cole slaw for use as a side or for those who like to add the cole slaw to the top of the meat on a sandwich. Pulled Pork can also be used in omelets, burritos, tacos, hoagies, or any other dish where small pieces of juicy meat can be enjoyed. 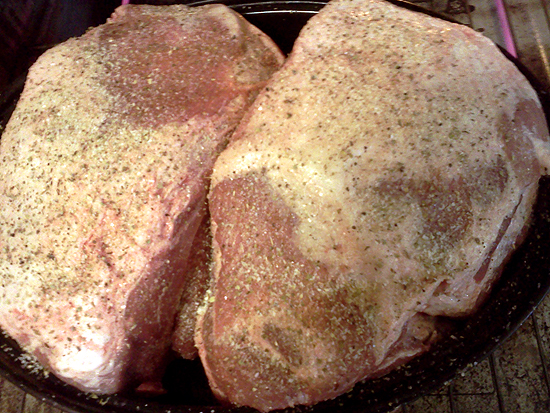 Two pork shoulders for a large gathering, approimately 10lbs each, on a rack in an oval roasting pan.

There are two different cooking methods I use for BBQ Pulled Pork. For larger amounts, particularly when we’re not on the road, I’ll use an old-school blue oval granite-finish roasting pan, with both a rack and a lid. Various sizes of this roasting pan are available, as well as round and rectangular configurations. But for this recipe, it’s really the rack for inside the pan that’s important. With larger pork shoulders I’ve also had to set the lid aside and cover the pan with heavy duty aluminum foil instead. But the rack is always inside under the pork.

The other device I use, especially when traveling, is a 6-quart crockpot (aka, a slow cooker). Liners which make for easier cleanup are available near the aluminum foil in most grocery stores for use with these cookers. It really doen’t matter what size the cooker is, as long as the pork shoulder you’re cooking fits in it comfortably so the heat can surround the shoulder properly. This airflow is why I use the oval roaster with a rack for larger amounts. 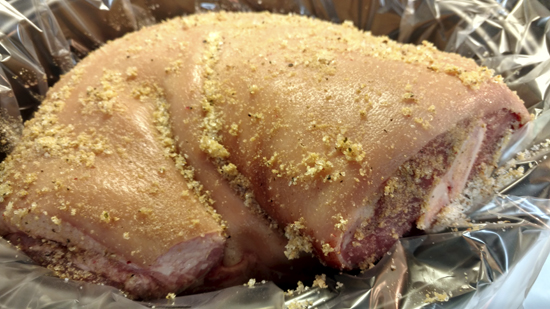 A 7.5 lb pork shoulder in a 6-quart crockpot, using a slow cooker liner for easier cleanup.

The key decision to make is what style combination of rub and sauce you want to use. My go-to rub really isn’t a rub: It’s my favorite spice mix for just about anything, Miracle Blend from Alden Mill House in Alden, Michigan. When my wife starts a new assignment, I make sure to have plenty of this stuff in the pack-out. You can also use a simple combination of salt, pepper, garlic, and any other spices you’d like, and simply add them directly to all sides of the pork.

There are also a couple rub recipes I use to achieve certain flavors:

I’ve also been known to just throw ingredients into a bowl and mix them by hand to create a rub, not really measuring anything, adding other ingredients to taste depending on my mood. You can be as creative as you’d like, achieving whatever flavor profile seems best.

The sauce we use most often is Sweet Baby Ray’s Original. For savory sauces, Montgomery Inn and Stubbs are excellent choices. Make sure to have about a half gallon of sauce for every 10 lbs of pork. 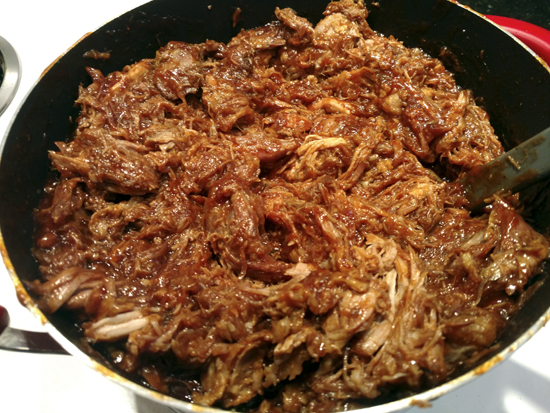 A batch of completed pulled pork, ready for transfer to the crockpot for transport.

In testing the meat you’re not looking for a given internal temperature, but rather the meat flaking apart like a good fish fillet, without being mush.

Remove the meat from the heat. While pulling the pork apart into a large stock pot, remove and discard the skin, fat, and the bone. Add your desired sauce to the pork and stir, completing the pulling for a good texture. Heat the sauced pork through in the stock pot before serving.