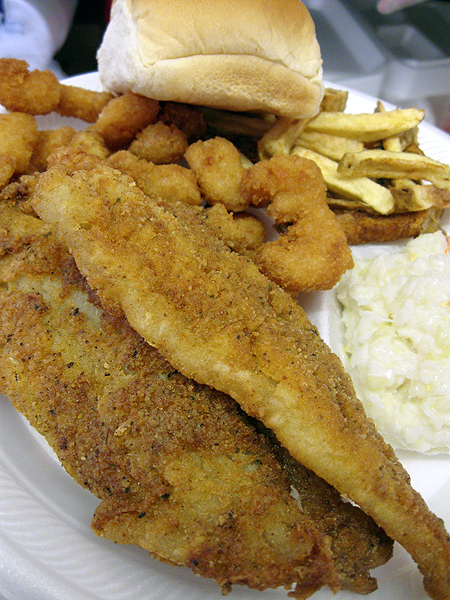 Coming out of American Legion Post 193 after shooting these photos, while still looking forward to having dinner there with Mary, my right foot hit the front edge of the bottom step out the front door of the place. The foot twisted around and all my weight went onto my toes as they rolled under. The sprain is one of the worst I’ve had. No, we’ll not sue! That would be nonsense. I’ll head up there sometime with some yellow safety paint for the edge of that short step as it’s definitely built wrong and is very deceiving. This is the second time I’ve twisted an ankle on it. Mary went in later to get dinners to go, and we ate at home. Even though she and I were able to share a quiet evening eating dinner at home, we were really looking forward to spending time with people there at the Post and will likely return another Friday for their company.

Fish Fry Dinners on Fridays during Lent. They seem to be everywhere, from restaurants having all-you-can-eat fried fish and seafood specials on Fridays, to just about every Catholic parrish hosting the dinners as well. Yesterday morning during their news broadcast, our friends at 13abc listed some of the participating churches in the Toledo area which are hosting these dinners from now until April 10th.

When I was growing up, Myer Elementary School would never serve meat on Friday in the lunchroom. It was always Cheese Pizza made in a sheet pan. The cheese was shredded too small, and we thought it looked like maggots. Still, it was good, as the lunch ladies made it fresh. I’d have rather had fish though.

So what are these dinners all about? Where’d they come from? From Wikipedia, an article titled, “Fasting and abstinence in the Roman Catholic Church“:

Contemporary legislation is rooted in the 1966 Apostolic Constitution of Pope Paul VI, Paenitemini … Current practice of fast and abstinence is regulated by Canons 1250-1253. They specify that all Fridays throughout the year, and the time of Lent are penitential times throughout the entire Church … Under Canon 1253, the local norms for fasting and abstinence are determined by each episcopal conference … Abstinence from all meat is to be observed by all Roman Catholics 14 years old and older on Ash Wednesday and on all Fridays of Lent … Parishes in the United States often sponsor a fish fry during Lent. In predominantly Roman Catholic areas, restaurants may adjust their menus during Lent by adding seafood items to the menu in an attempt to appeal to Roman Catholics.

Other organizations also attempt to appeal to Roman Catholics by hosting their own Friday Lenten Fish Fry Dinners. Here in Luna Pier, where fishing is quite popular and fishing charters operate out of our in-town marina, American Legion Post 193 has hosted their own Friday Lenten Fish Fry Dinners for many years. These photos are from the dinner hosted for the public yesterday evening, and every Friday through April 10th. 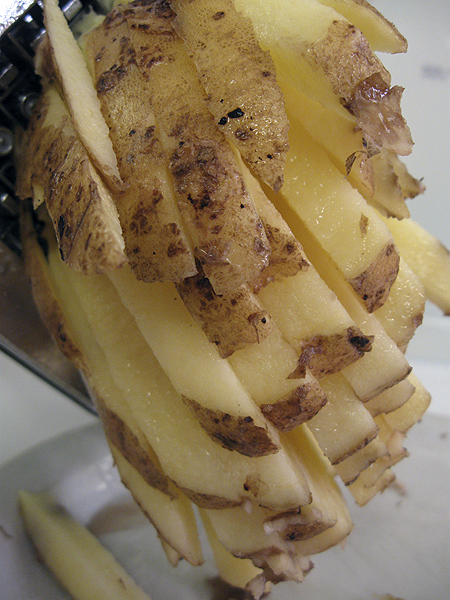 Fresh-cut French Fries, not quite out of the cutter. These beautiful potatoes are Barbara Anns, supplied in 50 lb. restaurant-quantity bags by Smith Bros. Farms just a few miles from Luna Pier in Erie, Michigan.

Once the gang in the kitchen understood who I was and that I wanted some good photos so I could spread the word about these dinners, they were telling me all kinds of things about their operation there. The state had just come through within the last couple days for a health inspection, and the Post’s kitchen and processes didn’t receive a single “hit”. Not one issue on the inspection. The guys in the kitchen work quite hard to ensure a clean place, and it shows in the food they serve. They also told me that last Friday, February 27th, was the best night they’d ever had in all the years they’ve hosted these dinners. 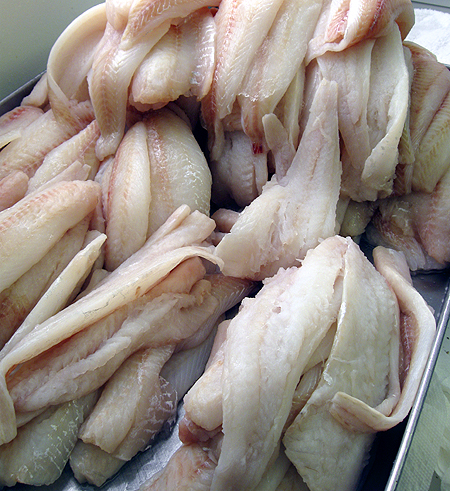 A pile of frozen commercial Alaska Cod thaws briefly in a sheet pan for the evening’s dinners. All this fish would be served during a single evening’s fish dinner operation.

There were three dual deep fryers in the kitchen, countertop food-service-grade electric models that sell for $800 or so. With the cod, shimp and French fries all needing to be cooked simultaneously for these dinners I’m surprised there weren’t more fryers back there than there were.

The kitchen crew was starting with some fine-looking Alaskan cod. Filets were dredge in Young’s All Purpose Batter Mix, which is made in a small garage on Summit Street in Toledo. This batter mix is extremely popular, available at Kroger, smaller groceries, and Cabela’s and Bass Pro Shops. Fisherman love the stuff. It works well and doesn’t overpower the fish while giving the fish a crispy coating that’s quite satisfying.

Shrimp arrives at the Post previously breaded from a food-service supplier. Unlike some breaded shrimp, the breading and sizings are rather consistent in the shrimp the Post is serving. Sides and condiments for these dinners include Cole Slaw from GFS Marketplace (with a hint of horseradish), a roll, and tarter and cocktail sauces for dipping.

I’ve mentioned before that Mary doesn’t really like fish. But with this dinner, she ate all of it. She seems to like lighter, more milder-tasting fish prepared well, and this dinner was certainly that. 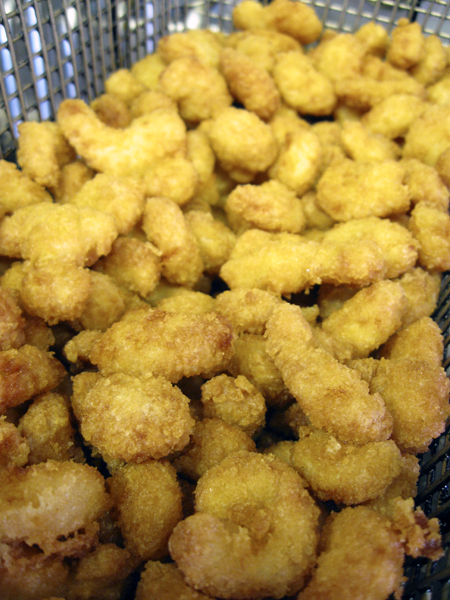 A basket of shrimp comes out of one of the deep fryers.

The first pic of this post is a close-up of a plated serving of the Posts’s Friday Lenten Fish Fry Dinner. For that photo, the plating had been prepared by and was being held for the photo by this young lady. An admitted Luna Pier Cook reader (she high-fived me when I verified this was me), it was also her 20th birthday. Her dedication to the Post really shows when you consider that’s where she decided to spend her birthday evening. Of course, she absolutely hates having her picture taken … 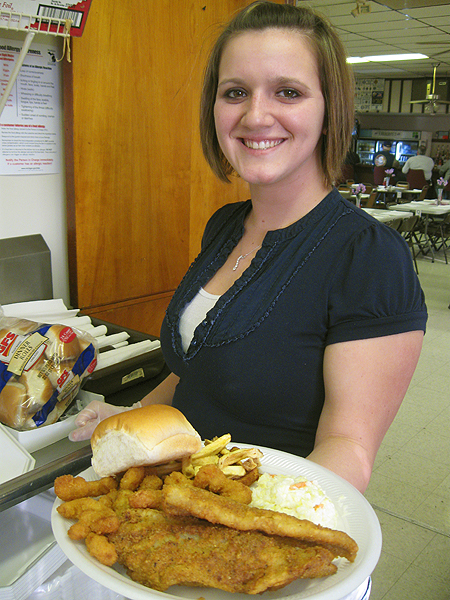