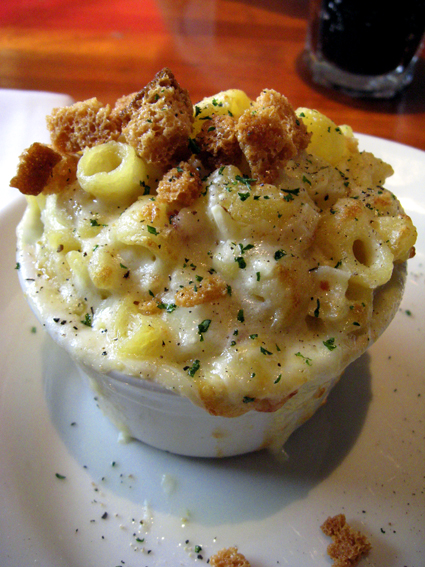 Update Oct.8, 2014 – Ok, it’s crazier today than it was a year ago. 235 298 views of this page today alone because of pins of the above pic on Pinterest! Alright, here ya’ go folks, maybe this is what you’re looking for … Over on The Kitchen Prescription Sherri in Florida has worked throough a couple iterations of a recipe she calls “Copycat J. Alexander’s NYO (Not Your Ordinary) Mac n’ Cheese“. I haven’t made it, but the comments over there indicate she’s gotten quite close. I hope that helps!

Update Nov. 9, 2013 – This is crazy. I don’t even like Pinterest, even though my wife and daughet are all over the thing. But what’s the most popular post on this blog? This one. Why is that?? Pinterest. Dammit, I might have to go there. But I’m not tweeting anything, ever. I’m old enough that if I tweet I go see a doctor …

Ok, so it’s a ramekin full of macaroni and cheese. Big deal, right? Oh, you are soooo wrong … This is a serving of Not Your Ordinary Mac & Cheese from the J. Alexander’s location on Talmadge Road across from the Westfield/Franklin Park Shopping Center. We’re talking beautifully-made macaroni, swiss and other cheeses, bacon, handmade croutons … definitely worth more than the $4 we paid for this extra side dish.

Mary took me to J. Alexander’s yesterday for my 46th birthday. We’d actually planned on going elsewhere, but unfortunately some confusing information on that restaurant’s web site meant we showed up there a full hour before they opened. Mary had often talked about taking me to J. Alexander’s. Our dear friend Joannie Kitchen, Chief Flight Instructor at Bowling Green, has raved about their salmon, saying it’s the best she’s ever had. Taking Joannie up on her word, the Norwegian Grilled Salmon is exactly what I ordered, with a side of Orzo & Wild Rice: 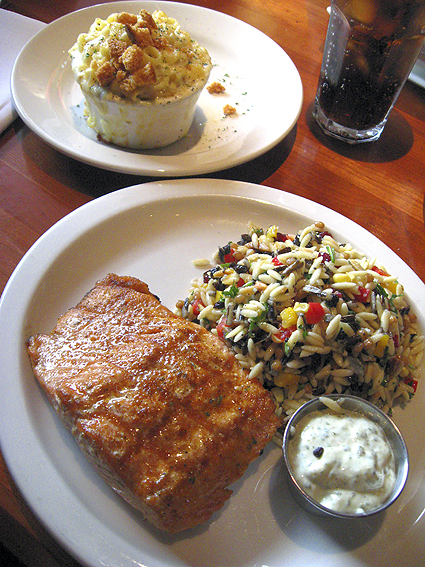 The salmon was grilled medium-rare, at our server Allie’s suggestion. I’d have ordered it that way anyway … Back in July I’d raved about the Gravad Lax at the IKEA store in Canton, writing “This is the kind of salmon that almost dissolves when you put it in your mouth.” Well, this grilled salmon was just as good, being light and flaky, bordering on ceamy with a little bit of buttery thrown in for good measure. The thinner edge carried a little more seasoning, and there was a more peppery flavor there. But the rest of the filet was so incredibly worth ignoring that one edge. The Orzo & Wild Rice, with its chopped red & yellow bell pepper, dried cranberries, slightly tangy vinagrette and served chilled, makes for an amazing side dish. I brought some home and will have it for lunch today.

Mary ordered their Rattlesnake Pasta. There’s no rattlesnake in the dish. Rather, the linguini-style pasta noodles with peppers and southwestern spices are served with pulled rotisserie chicken that looks like lengths of rattlesnake. It was a wonderful dish. 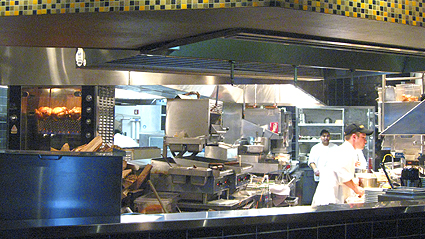 The open kitchen at the Toledo location of J. Alexander’s is fun to watch. Chickens are roasting in the rotisserie unit on the left, which you can see immediately upon entering the restaurant. A stack of hardwood firewood is near the rotisserie unit … all their steaks are grilled over a hardwood fire. Interesting to note is that a lot of their cooking surfaces, such as the grills just to the right of the wood, are countertop units, making the kitchen simple to reorganize to follow menu changes.

Of course I had to order their Very Best Chocolate Cake with Vanilla Ice Cream and Hot Fudge. As it was my birthday dinner, Allie had included a lit candle when she served my dessert. 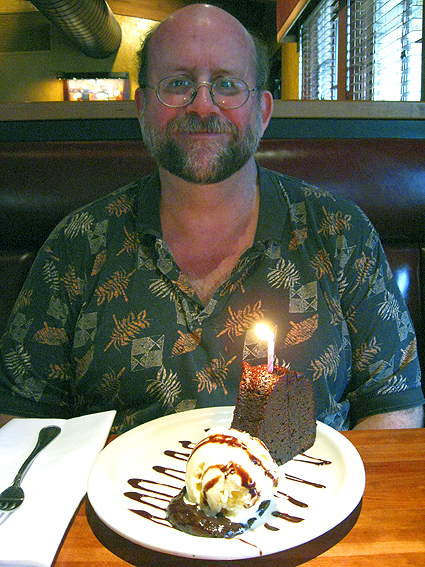 After Mary had taken the first of a pic of my dense chocolate dessert, I took the camera to look at the image on the screen. Suddenly, Mary was wide-eyed, with “UMM … Ahhh … HEY!!” … and just as suddenly, I dropped the camera and grabbed my wrist with a loud, “Oh, SH*T!!!”

Mental note: Beware of lit candles next time someone hands you a camera to look at. Maybe the hair on my left wrist will grow back in a month or two …

While sharing my dessert, Mary also had some Carrot Cake with Cream Cheese Icing to share with me. Served warm, it’s some of the best carrot cake ever.

We’ll be going back sometime, oh yeah, we will. But any dessert will be requested as “sans candle“.