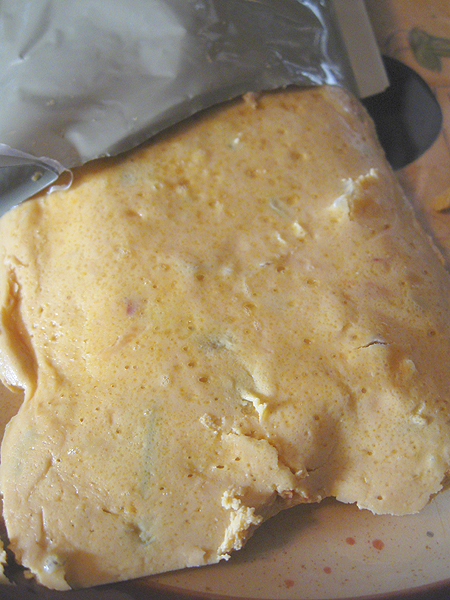 Click on this pic for a larger, more mouth-wa … umm … never mind …

You may recall a certain U.S. Marine came home for Christmas and, for a gift, gave me an MRE, specifically, “Menu No. 4 Cheese Omelet With Vegetables”. He then quipped, “Oh and don’t eat it … those things are disgusting beyond reason”, just prior to accidentally setting the dog on fire.

I spent a week or so politely ignoring the pouch in my office. And then, it happened.

Pfc Winckowski: “Did you eat the MRE yet?”

Pfc Winckowski: “Really, I thought you would.”

Aw, crap. Now I’ve disappointed one of our finest. Obviously there’s something I need to do. 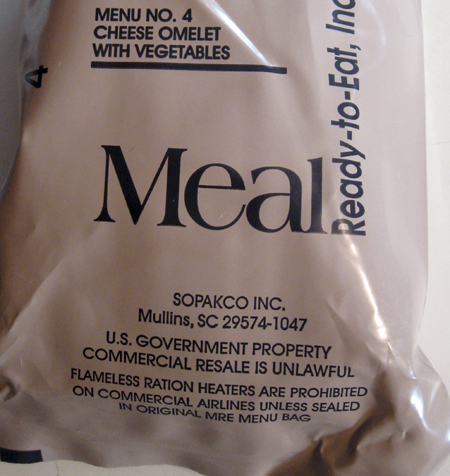 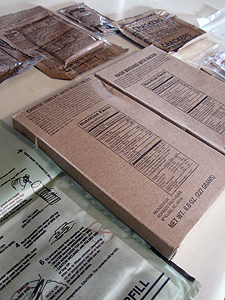 The pouch that contains a real honest-to-Murgatroid MRE is rather unimposing. The warning on the pouch is a little odd; “Flameless ration heaters are prohibited on commercial airlines unless sealed in original MRE menu bags.” Right, and it doesn’t take much to get this bugger ope … umm … well, ok, I had to use a fairly sharp pair of scissors to open the thing. Big deal, so the Pfc was laughing at me, says he can open it one-handed, I really don’t care … There’s a larger assortment of pouches within the outer one than I expected. Let’s see, the green heater bag, a box with the omelet in it, another box with hash browns, some crackers, a … scone? Cool … some strawberry jam, a tube with a beverage mix like the ones for water bottles, crackers, a condiment pouch with mints and spiced cider and … what’s that? Two squares of toile … should last … a day??? He really did tell me that’s for a whole day. Doode, there’s no way … babies on mothers’ milk need more wiping power than two squares of T.P. a day … 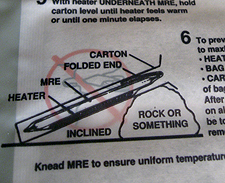 There are a couple … interesting … warnings on the heater bag. “2. Vapors released by activated heater can displace oxygen. When ten or more heaters are used inside a vehicle or shelter, ensure the ventilation system is operating or a top hatch or door is open.” Sure, I always cook in the van. Honey, open the door so I can feed the kids! No, it’s just I-75, everything should be fine … want an omelet? “3. Hot water leakage can burn and cause a cold-weather injury …” I think something’s wrong with that sentence … “Use caution if carrying activated heater in pocket.” You know, when I was in the Navy things were described as “sailor-proof”, such as twelve 100-pin connectors on the side of a radar unit and no two had the same connector. It was impossible to plug the wrong cable into the wrong socket. The Pfc has said he’s already learned that things are “Marine-proof”. I do believe in this case that’s certainly untrue and that, somewhere there’s a platoon of Marines marching around with activated heaters in their pockets.

That other pic to the left? I guess you prop it onto a rock or something when it’s cooking. That’s what it says; “Rock or something”. Marine-proof, that. Too bad the circle with the line through it on the chemical heater pouch shows through the heater bag in the wrong spot.

Ok, got the omelet, the hash browns, the beverage pouch … only one heater bag. Yo Marine, I think I got gypped! “No sir, there’s only one heater.” Say, what?? “You have to decide which item you’re going to eat. You can only use the heater once.” But that’s not a complete breakfast. “This meal is generous. [It sounded as though he’d heard that more than a few times.] I normally eat the omelet. And you may only get one MRE a day, so you have to make a good choice.” The omelet is only 270 calories, with 18g of fat and … 540 mg of cholesterol? 180% of the daily value of cholesterol??? And you look like that? Holy flurking schlidt … 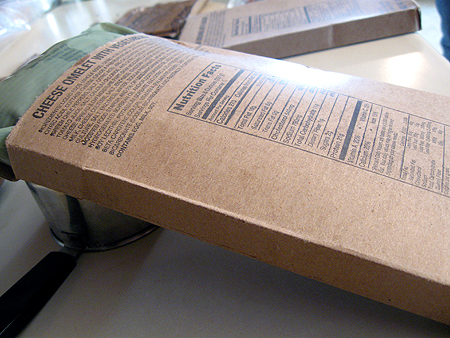 Oh … my Lord. That was most decidedly the worst excuse for an omelet I’ve ever had in my life.

The ingredients on the omelet pouch list “liquid eggs (whole eggs, citric acid, water …)” I’ve had some pretty nasty eggs in my time. On the aircraft carrier our scrambled eggs were diluted with distilled sea water. The “omelet” in this MRE wasn’t even that good. The distaste began with the texture, like biting into the chunky foam rubber they call carpet padding. And the “taste”? I’d rather eat the padding.

With the heater now defunct, I soaked the hash brown pouch in a bowl of almost-boiled water for ten minutes. 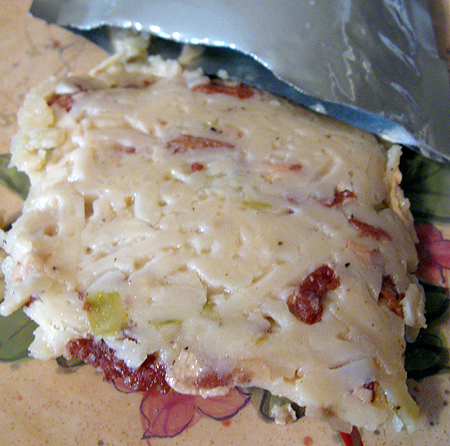 There’s some green pepper chunks and bits of real bacon in with the shredded potatoes. But the potatoes were a bit soggy and of course had zero “crunch”. While I could only stomach a couple bites of the “omelet”, I had a couple more bites of the hash browns.

The scone was pretty good but the crackers seemed stale. And a vacuum-packed pouch labeled “Toaster Pastry” contained a surprise; A single Kellogg Pop-Tart. Too bad there was no toaster in the MRE … What was funny was it was one Pop-Tart in its own Kellogg-branded foil pouch … which had been torn open and the other Pop-Tart removed prior to vacuum-packing for the MRE. Makes one wonder if there’s a pile of single Pop-Tarts somewhere, all looking for a home …

Pfc Winckowski pointed out the MRE’s one saving grace: 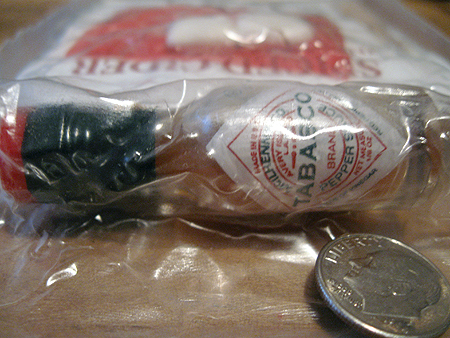 “I put this on the omelet to give it some flavor. Everybody does.” Good thing, because there wasn’t any salt or pepper to be found. Or flavor, except in this little bottle.

Here’s the thing: I AM APPALLED OUR MILITARY HAS TO EAT THIS CRAP.

This MRE was just plain nasty, or as the Pfc had originally said, “Don’t eat it … those things are disgusting beyond reason”.

Doode … ya’ got that right.