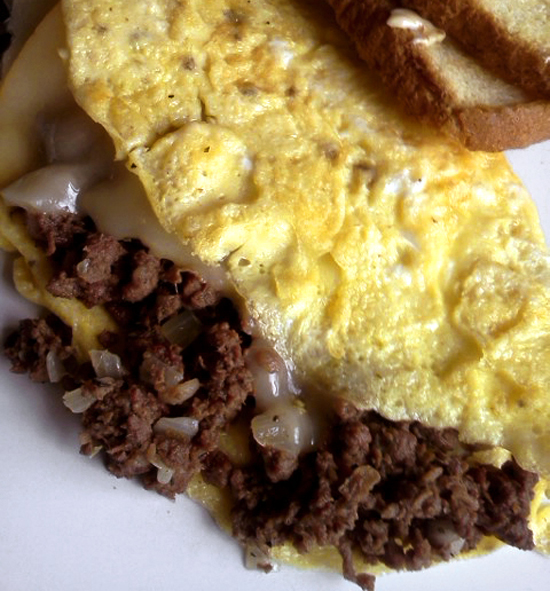 Having suffered my first sinus bleed in three years last weekend (a rather bad episode I might add, with about three pints of blood loss), I found myself once again in need of the wonderful healing properties of the Coarse Liverwurst from Kilgus Meats in Toledo. Mary picked up four pounds of the stuff on Friday, keeping two pounds in the fridge for my use and throwing the rest in the freezer for later. I’ve been munching on its beautiful richness quite a bit on its own with just a fork as usual, and every time I do I seem to get a bit more energy.

On this Easter morning we’ve been taking it kinda easy. I haven’t cooked in more than a week and felt it was time to actually get up and get myself something instead of having Mary or someone else do it. I wanted eggs but of course felt the coarse liverwurst would end up being a side dish anyway. That’s when Aaron suggested I make a Coarse Liverwurst Omelet. That sounded pretty darn good.

I decided I wanted to sauté the liverwurst, as it would need to be like the meat in the Fried Egg & Spam dish that’s popular in Hawaii. Adding chopped onion to it would also give it the texture of a handmade corned beef hash. With the liverwurst being as rich as it is I knew I wouldn’t want a strong cheese in the omelet. I needed a mild cheese to balance the flavors, and Muenster seemed a better choice than Swiss because of the additional creaminess offsetting the texture of the sautéed liverwurst and onion.

The amounts used in this recipe are certainly to taste … I used a lot more of the liverwurst than most people would, cutting a bit more than an inch off the loaf and skinning it before breaking it up into chunks. Without adding oil or butter to the omelet pan, I sautéed the coarse liverwurst and a few teaspoons of chopped yellow onion until the liverwurst broke down into smaller pieces and the onion was translucent. This I drained on some paper towel.

After wiping out the pan, I melted a tablespoon of unsalted butter then made a 3-egg omelet over medium-high heat the normal way, seasoning with our standard staple for eggs, Alden Mill House Miracle Blend. (A combination of Kosher salt, black pepper, granulated garlic and other spices, a product made in Alden near Torch Lake here in Michigan, and also available at Kilgus Meats in Toledo.) When the omelet was almost ready, I added the still-warm meat and topped it with the slices of Muenster cheese.

This turned out to be a lot better then even I thought it would. I hadn’t overcooked the liverwurst so it was still nice and moist. I might have wanted to add a third slice of the cheese for more creaminess, but it was still a good amount. This is something I’ll make again, especially when a couple more of my boys are home and I’ll have the strength to cook it for them.

As it was though, when I sat down to eat it, I was sweating and short of breath from the exertion of actually doing something. Obviously, I still have a long road ahead.

Thanks for the suggestion, Aaron!