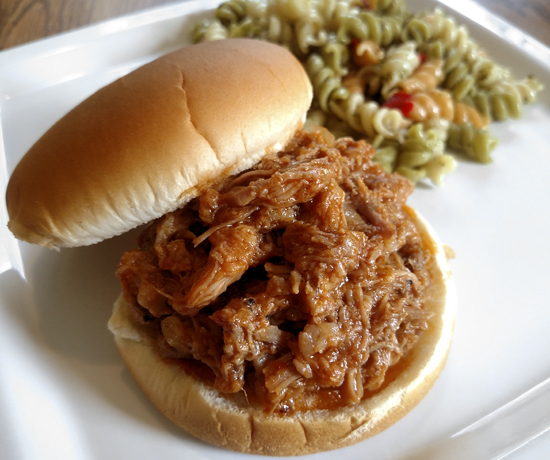 Longtime readers, friends, and fellow cooks will know of my longtime fascination with a certain couple of hot sauces. In a ten-year timespan our household subsequently had become partially involved with the sauces, as many of the recipes on their web site came from our kitchen. Later on, the recipes had even migrated onto one of our own web sites, and we became the official archive for the collection.

Sometime late this summer a disconnect of sorts occured, and suddenly and without warning the sauces became completely unavailable. They simply weren’t there anymore. I only found out when Mary asked for the barbecue sauce I used to make, to be used in pulled pork sandwiches for her birthday celebration this past Saturday. I went to order a half-dozen bottles of the peach-mango-habanero sauce, only to find the web site itself no longer existed.

Talk about a mad scramble.

I had convinced Mary that using Sweet Baby Ray’s was alright as a substitute. Ray’s has always been our fall-back sauce. We use Old Montgomery on occasion when our son-in-law Andrew is here for dinner as that’s his favorite. And we sometimes use a Kansas City sauce, if only because it has a unique flavor profile we all enjoy.

But even though she said Sweet Baby Ray’s was alright, I knew better. I needed to find some kind of a substitute for the peach-mango-habanero sauce I used to make for her with the older hot sauce. 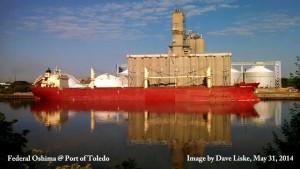 I decided to head to The Anderson’s, a local chain of three retail stores in the Toledo area. The Anderson’s is more than just the stores … Since the 1940s they’ve also been the leading grainery in the area, with huge silos (seen in my image to the left of the Federal Oshima) along the River Raisin, accessible by grain shipping vessels traveling the Great Lakes. They’re also known for dealing in fertilizers for farmers, ethanol, and managing fleets of rail cars transporting their products. They opened their first retail store in the 1950s, which have become places to find all kinds of more unique food products than the national chains they’re competing against.

I had decided to find some kind of barbecue sauce with a spicy-hot base and some kind of fruit involved. The Anderson’s store in north Toledo has a twenty-foot aisle of barbecue and hot sauces, along with other spicy preserved sauces, so that’s where I headed. Some barbecue sauces had raspberries and pineapple, along with some spicier sauces containing honey, but really nothing even close to what Mary really wanted.

Heading into the hot sauces I looked around for a bit … and then stopped dead in my tracks. 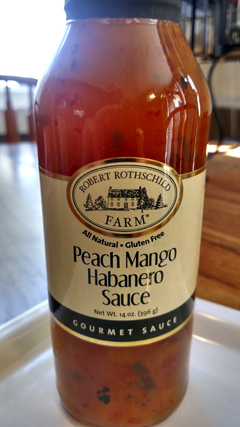 There they were. A couple rows of 14 ounce bottles of Robert Rothschild Farm® Peach Mango Habanero Sauce. Which of course solved absolutely everything.

Looking at the back of the bottle I found a few differences from what I was used to. The ingredient list was in a different order than the one I knew, so I’d have to make a few adjustments to the recipe I already had. This bottle was also 14 ounces vs. the 12 ounces of the other bottle. Robert Rothschild Farms also uses lemon juice in theirs instead of the lime juice of my previous supplier. There’s nothing I could modify there … I could have added lime juice, and still might as I experiment later. But it’s really not necessary.

After grabbing this bottle I headed home, printed the older recipe, and started scribbling the modifications. Some items increased to accomodate the larger bottle size. But I also decreased the amount of water, wanting to kick up the flavor (for a reason I’d rather not disclose here). I could decrease the water further, replacing some of it with lime juice, which again might happen later …

I made the one batch on Friday for the Saturday event. Once I had the sauce rendered down I took a tasting spoon to Mary, who pretty-much swooned at the flavor. The resulting pulled pork went over extremely well with our family, which was very satisfying. And Mary was eating sandwiches with the leftovers for a few days.

What you want to do is this simple: Take a 9 – 11 lb bone-in skin-on pork shoulder and generously rub it with a combination of Kosher or sea salt, ground black pepper and garlic powder. Place it skin side up on a rack in a roasting pan, cover it with a lid or aluminum foil, and roast it at 225F for eight-to-ten hours. Test it after about the seven hour point … You’re not looking for a given internal temperature, but rather the meat flaking apart, without being mush. At that point, remove the meat from the oven. Remove the skin, fat, and the bone, and pull the pork apart into a large pot. Add the sauce as described below and stir, completing the pulling for a good texture. Heat the sauced pork through. Serve on good buns, such as a Kaiser roll, possibly topped with sliced jalapeños for additional heat.

Chop the onion. Melt the butter in a 4-quart non-reactive pot and sauté the onion until translucent. After shaking it well, add the full bottle of Robert Rothschild Farm® Peach Mango Habanero Sauce, ketchup and Worchestershire sauce and stir until combined well. Add the water, beef stock and vinegar. Heat till boiling, then reduce heat and simmer gently for 30 minutes to thicken, stirring frequently. Remove from heat and allow to cool before storing in the fridge.

Note: Make sure to use good ingredients for this recipe. Less-expensive ketchup, Worchestershire sauce and beef stock will likely not allow you to achieve the best final flavors.