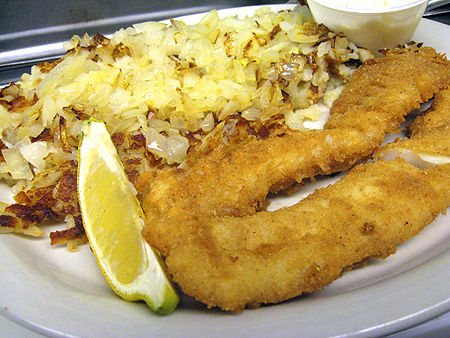 A serving of Cod with Hashbrowns from Gander’s Restaurant here in
Luna Pier, Michigan. While the restaurant’s owners aren’t Greek (they
hail from Albania) the food is quite reminiscent of that from some of the
better Greek diners I’ve visited over the years.

The New York Times recently published an article on the demise of Greek-owned diners within the city. From the article:

(T)he immigration pipeline from Greece that peaked between the 1950s and 1970 has dried up as Greece has prospered … All that is not to mention what Peter Makrias, publisher-editor of a magazine for the Greek-American food industry, says are the two most insidious forces wiping such diners off the map — the banks and chain drugstores that are buying up those enviable roadside locations and the competition from franchise restaurants.

My family first took notice of the Greek-owned restaurants in Michigan in the late 1970s. It became a kind of game, searching out these wonderful family diners with their massive portions of good honest food, the kind of food truckers would also seek out on a regular basis. We became friends with many of these owners in the Flint area and frequented their establishments on our normal Friday evening shopping trips.

I remember a Greek-owned restaurant on the King’s Highway just west of Toronto. We were staying at the Candy Haven Tourist Home in 1982 and ate at that restaurant across the street each morning. And each morning, the owner & cook would come out himself to take our order. There were six of us traveling that trip, but the man never wrote our orders down. He cooked them up, along with anything anyone else had ordered, remembered everything perfectly, and knew afterward which plate went to which customer.

I have my own story about working working with an excellent Greek cook. I didn’t enter a restaurant kitchen until April of 1983. Frisch’s Big Boy on the western edge of Columbus just outside the freeway somehow decided I was the right person to open their first breakfast bar and operate it five days each week. We tested everything for longevity in a steam table on wheels. Grits didn’t hold out too well, nor did pancakes, or the fruit pie filling we set out as toppings. Of course, scrambled eggs, sausages, freshly-grilled shredded potatoes, and other decent things survived the hours on that table under the warming lights.

Gus Pappas was the first cook I knew who taught me real skills. A tall, skinny Greek at least 50 years old, he taught me to steam whole eggs instead of hard-boiling them to make them easy to peel. He was the first to show me halfway-decent knifing skills, how to prep a whole pineapple to make it a snackable food, and how to really taste a dish, and then make adjustments to it. When Gus was eased out of the management of that Big Boy in 1984 in favor of young MBA types, the real skills in that kitchen also went away.

(P)essimists feel that the flavor Greeks have brought to diners will one day pass into memory. [Aristides Garganourakis, 57, owner of the Dobbs Diner in Dobbs Ferry] puts it bluntly: “When Greeks get out of diners, there will no more be diners.”

I hope this doesn’t happen. Diners have been around longer than the Greeks have been here. Those diners might just need to be re-invented.

In a large mixing bowl, mix together all the dressing ingredients. Use tongs to mix in the shredded vegetables. Cover with plastic wrap and chill at least two hours before serving.