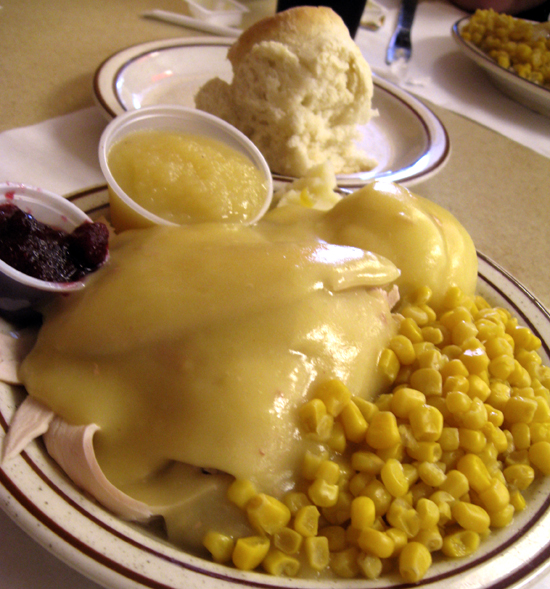 Turkey? A full-blown turkey dinner, with stuffing and potatoes, and cranberries … in July?? You bet your boondockers! Turkey anytime, and this particular plate is one I’ve been enjoying off-and-on my whole life! No, not … the same plate of turkey and stuff … my whole life … that would be … no, that’s not right …

Up in Kawkawlin north of Bay City, on M-13 (east of I-75 between Beaver and Linwood Roads) is a great old place called the Turkey Roost. Located on the east side of the road, it’s painted pink so you can find it:

They actually used to keep turkeys in a pen by the road, but the practice had to be stopped for various reasons. (There’s an old picture of this pen on the wall inside the restaurant.)

The Turkey Roost is one of Michigan’s older food destinations, and remain a destination today. Long before I-75 bypassed the town of Kawkawlin, folks making the drive through town would stop in for a hot, satisfying meal. Today, the restaurant is a destination all its own, and remains popular as a place for kids to take grandparents who used to go there when they were young.

The dish at the top, the meal I ate for lunch this past Friday afternoon, is only the half-plate turkey dinner. Yes, the full plate is almost twice as big! What’s interesting about these turkey dinners is the speed involved. Rarely will it take more than five minutes between the time you order the turkey dinners, and when they’re delivered, piping hot. The turkey is moist and tender, the stuffing it covers is hot and satisfying, and those biscuits are better than most.

The Turkey Roost does have a full menu for breakfast, lunch and dinner. Their breakfasts are like Grandma used to make, very filling, and very delicious.

If you’re headed north at all at any time, the Turkey Roost is close enough to I-75 that it isn’t enough out of the way to ignore. We get there as often as we can, and really, that’s definitely not often enough.