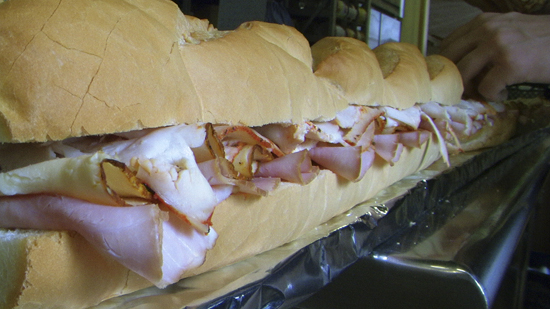 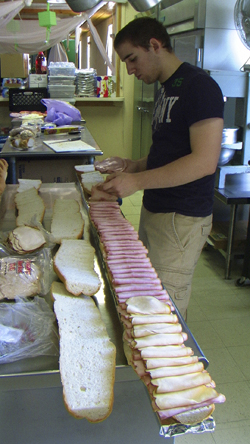 What do you do when someone you seriously love, like a daughter, asks for six-foot subs for an event? How do you handle what seems a request with all kinds of possible logistical problems? Well, lemme tell ya’ …

It’s a simple concept: Guys aren’t supposed to attend baby showers or even be anywhere near the things. I’ve been told to drop women and girls off at such an event and have heard at the last minute, “I’ll call you when we’re done”. This can mean the shower might last one hour or possibly four hours. You never can tell until the call comes.

I have to say though that I’d been to a baby shower over 18 years ago. Adam (building the sandwich in the photo on the left) hadn’t quite been born yet. His mom’s sister flew from Michigan to Virginia to be at the shower, but Adam’s mom didn’t know about the surprise shower or that her sister was coming at all. At the hospital she worked at, Adam’s mom showed up at the conference room for a “meeting”, complete with a notepad and pen … and was completely and happily surprised, not only at the shower her co-workers were throwing for her and Adam, but also that I’d brought her sister to the hospital shower as well.

This past weekend we held the shower for my daughter Briahna and our yet-to-be-born granddaughter Allie Grace. Baby daddy Andrew was also there, and we insisted he be an integral part of the shower.

Briahna decided early-on she wanted a pair of six-foot subs for the meal for her friends and relatives, along with the food a few other family members would provide. She asked me to handle the kitchen and I commandeered Adam as well.

Going through the need for the subs, Adam and I quickly discovered one thing: Buying pre-made six-foot subs is expensive. And honestly, they’re not difficult to make from readily-available ingredients. The end result also has a much more reasonable cost as well.

I’ve mentioned Country Market in Adrian, Michigan, a few times in some recent posts. For this particular project the bakery and deli came through for us in providing all the main components of the two sandwiches themselves. But I’m getting a little ahead of myself. Let’s start at the very bottom …

This past Saturday morning, the morning of the event, I realized I’d neglected to get “platforms”. Adam and I would be building the sandwiches in a kitchen, then moving them out to the party area to the buffet table. We knew we’d need a stable pair of six-foot platforms to do this. Fortunately there were a couple lengths of pine 1×4 in the garage. Adam cut these down to the correct length. Once we got to the kitchen, I wrapped the boards in good aluminum foil and sealed the foil with Scotch tape. Really, it’s that simple, and looks halfway decent.

As soon as Adam and I had decided to do this build ourselves, we also knew there was no way to make, buy, or even successfully transport sub rolls that were a full six feet in length each. So with Country Market‘s help, we cheated. The bakery department makes a very nice 18″ French bread that’s between four and five inches wide. Eight of these would give us the length we needed but I ordered ten just in case, which turned out to be a good decision. On the boards, the pointy heels of the breads were problematic. So we cut the heels off eight of the breads. Lining them up on the boards they were slightly less than six feet for each sub. We then trimmed up a ninth bread to fill in the empty lengths.

Adam used a serrated bread knife to cut the breads horizontally. After opening them up, we started laying out the meats. Bree had asked for a simple Club sandwich: ham, chicken and turkey. I figured the best way to handle the meat was to get a pound of meat for every foot of sub. Country Market’s deli sliced up four pounds each of Di Lusso ham, Kretschmar off-the-bone chicken and Butterball turkey. Folding each slice loosely in half, we eyeballed what it would take to lay the meats out accurately. The chicken and turkey were also cut rather thin and had good grain. Unfortunately, those characteristics made them both a little hard to handle … but Adam did a nice job in ensuring the meats were evenly distributed in layers over the full twelve feet.

Once the sandwiches were built we took one out to the table. For the front sandwich though, we decided a pre-cut would work well to keep the buffet line  moving. We removed it from the board, took the board to the buffet table, then cut the whole length of the sub in the kitchen in 1-1/2″ sections that we then moved wholesale back to the serving board. 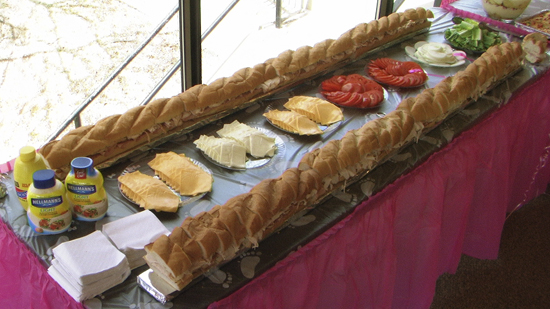 Condiments we laid out were mayonnaise and mustard, slices of American and Swiss cheeses, tomatoes, sweet onions and Romaine lettuce. Real simple.

So what happened? A few things actually. First, Briahna and Andrew really appreciated the subs. A couple guests also said, “This is way better than Subway!”, which in my opinion really isn’t that big a deal …

But there was one issue we didn’t anticipate. It was the fact that, yes, it was basically a room full of women, probably 50 or so. Not guys … women. Meaning … we had over seven feet of sub left over! We never cut the back one, and there were full slices of sub remaining on the front board.

With enough guys in the house and a couple giveaways, there isn’t anymore sub in the fridge today, two days later. That tenth French bread is still in there though. Maybe we could make some really interesting grilled cheese sandwiches. There’s sure a lot of cheeses left over yet … 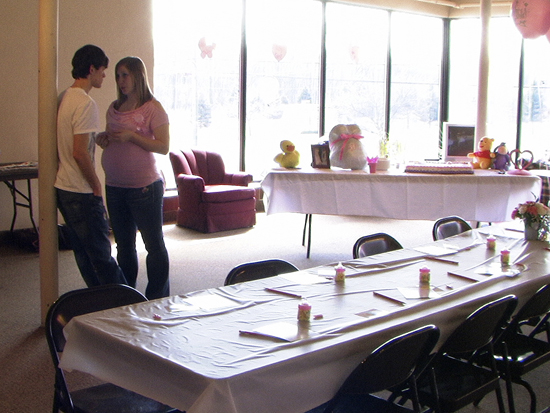 The happy parents: Andrew, one of the other guys at the shower, with Bree.