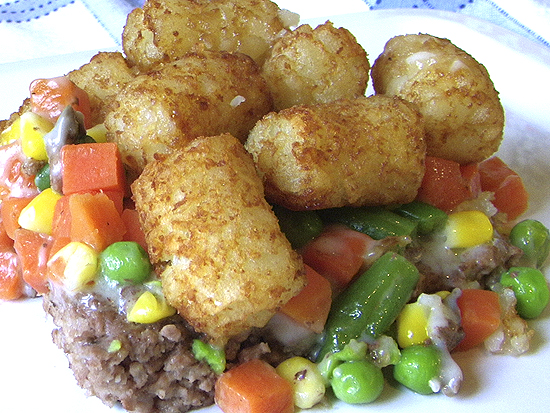 I decided some time ago this blog isn’t going to be like that.

My kids will eat most anything. My request to them has always been, “Try something once. If you don’t like it, fine, but at least you tried it and that’s what counts.” As a result, these teenagers and young adults who kinda look like me (albeit considerably thinner and definitely more muscular) are not picky eaters whatsoever. They’ll try anything, from boxed macaroni and cheese from a dollar store, to eel, octopus, coarse pork liver sausage, and coney sauce containing beef heart and beef kidney.

Aaron and I once even finished off a half-pound serving of steak tartare.

So when these kids ask for something like Tater Tot Casserole, I indulge them. They’re keen on ribs, slow-roasted pork loin, homemade chicken noodle soup and medium-rare beef, so once in a while something that belongs in the White Trash Cooking cookbook is fine by me.

This past Friday when we picked the kids up Mary asked them what they had for dinner, following it with, “… and don’t tell me it was Tater Tot Casserole.” There was dead silence from the back seat. I glanced in the rear-view mirror only to see Bri with her eyes wide and a smile on her face. Of course Mary blurted, “You always have Tater Tot Casserole!”, to which 17-year-old Adam replied, “But it’s good!!” The kids cracked up because they actually hadn’t had the dish that evening, they just thought it was funny.

Mary said she’d never had Tater Tot Casserole even though Adam and I were sure one of us had made it at least once before. We then decided that’s what would be for dinner yesterday evening. 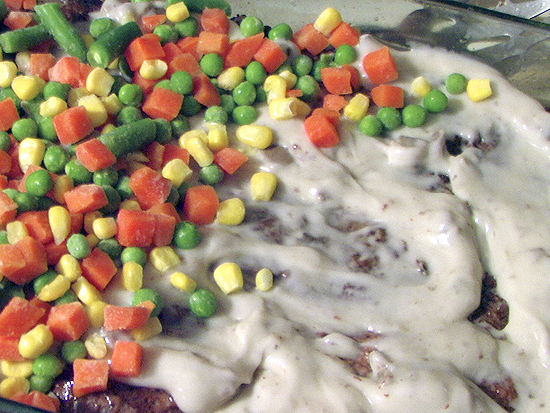 I have to say that, quite frankly, I don’t remember where this recipe came from. I recall first making this maybe 25 – 30 years ago so it didn’t come from a web search (even though it’s out there on the web in many forms now). It may have come from one of those fundraiser cookbooks many years ago. The 1981 Parish Pantry fundraiser cookbook from St. Paul’s Lutheran Church in Millington, Michigan, contains two versions of this recipe. This may have been derived from one of those recipes, but I’m really not sure.

At the same time, this is one of those recipes you can easily take up a few notches. The simplest changes are in changing the soup to cream of celery or cream of chicken, adding sour cream to the soup for added creaminess and smoother consistency, changing the ground chuck to ground sirloin, etc. But it goes beyond even that.

Here’s a version I’d like to try to make sometime: Imagine if you will a layer of slow-roasted stew beef, topped with a layer of duxelle as used in Beef Wellington, topped with sauteed vegetables of asparagus spears cut to one inch combined with whole-kernel corn, chopped onion and jalapeño, all topped with pan-fried potato cubes with a crispy golden-brown exterior.

Ok, so maybe this blog does veer that way on occasion.

Adam made this batch for us yesterday evening. Mary really enjoyed it and we’ll probably make it again in the future, especially since the kids and I enjoy it so much. Of course we’ll have to try the higher-end version sometime. I’ll probably wimp out on the duxelle though, and end up using a milk gravy with some sliced sauteed mushrooms in it … 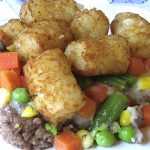 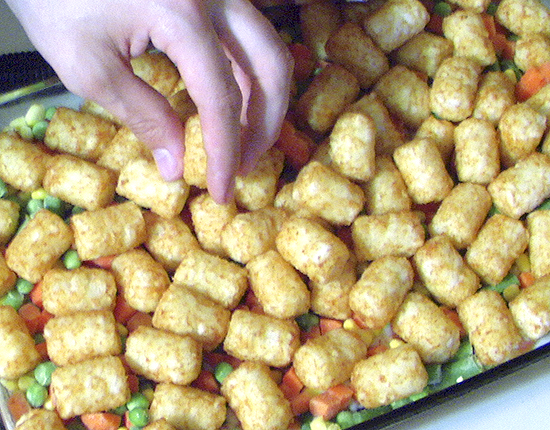