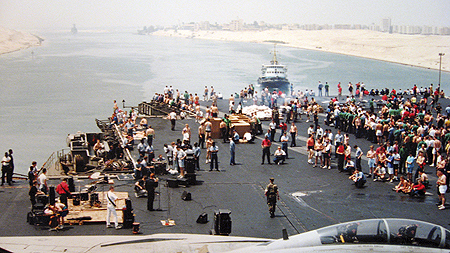 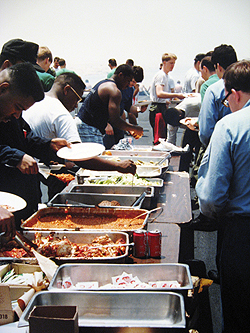 It’s now the beginning of the 2010 grilling season here in the midwest and I’ve finally been able to grill a couple times without having to wear a parka. Any time I start worrying about how many people I’m cooking for at any given meal, I think back to the day these pics were taken. I wasn’t a cook on the aircraft carrier USS America (I was just a technician in one of the electronics repair labs on the ship) but I saw how hard the cooks worked in feeding a crew of over 5,000 men four meals each day. (As ships operate 24 hours/day, 7 days/week, with two shifts, there’s a fourth meal around 1 a.m. for the night shift.) I took these pics almost exactly 18 years ago on May 22, 1992. We were making the passage from the Red Sea to the Mediterranean through the Suez Canal and the Captain had designated that day “Ditch Day”, a common name for such events. There was BBQ chicken, burgers, baked beans, corn, cole slaw, tossed salad, potato salad, dill pickles, and plenty of canned Coca-Cola for everyone. The day was rather hot, so there were massive water balloon fights and a few somewhat “leaky” firefighting hoses strewn about the deck. Note the band to the left of the first picture. How the drummer managed to get his kit onboard a combat vessel is beyond me.

Before anyone asks, the ship is no longer afloat:

In $22 million worth of “experiments that will last from four to six weeks,” the AP reports, “the Navy will batter the America with explosives, both underwater and above the surface, watching from afar and through monitoring devices placed on the vessel.” … These explosions would presumably simulate attacks by torpedoes, cruise missiles and perhaps a small boat suicide attack like the one that damaged the destroyer USS Cole in Yemen in 2000 … At the end, explosive scuttling charges placed to flood the ship will be detonated, and the America will begin its descent to the sea floor …

So how many are you grilling for this weekend? Navy ships around the world may very well be conducting such a picnic as the one in these photos, with thousands in attendance on a small metal “island”. We can only hope the sailors on those vessels can have as peaceful a picnic as we did that day.

For the rest of us, outdoor cooking has come a long way from the green, boxy, stamped metal cookstoves that were seemingly obiquitous from the 1940s through the 1980s. Those particular cookstoves are still available today and are still popular in a lot of circles. But with today’s cooks watching more cooking shows on television and having more experience with professional-grade equipment, equipment design has taken huge strides towards providing the same grade of equipment in considerably lower-cost packages. 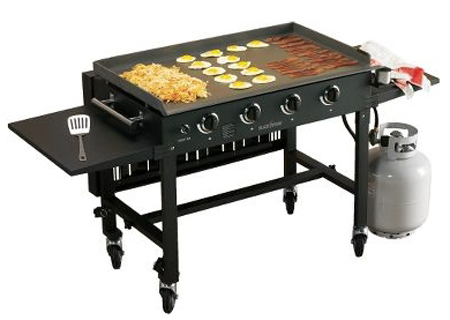 In the summer of 2008 whan I ran the beachhouse concession here in Luna Pier, Michigan, next to the public Lake Erie beach I offered just a bit of breakfast for a while. I tried frozen sandwiches and breakfast burritos, muffins and danishes, and even simple donuts, but didn’t sell enough of any of them to satisfy being open for those hours. I finally shut down breakfast and instead opened the shop at 11 a.m for lunch. If I’d have had the Blackstone Four-Burner Griddle pictured above, I could have made customers complete, fresh breakfast including eggs, diner-style omelets, hash browns, etc. We could have also grilled the hot dogs for our Flint-Style Coneys like they do on the west coast instead of steaming them. All of that would have been a lot better. 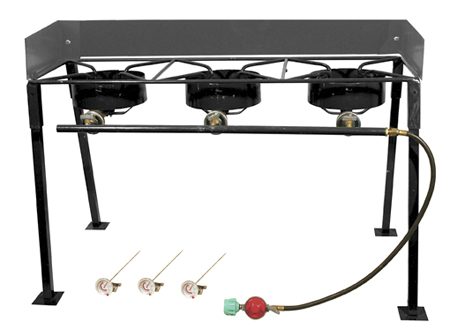 If you were able to stop at our house for the City-Wide Yard Sale in 2006 or 2007 you’ll know that I enjoy deep-frying handmade corndogs in my King Kooker 18″ Rectangular Cooker. The company also makes the above Triple-Burner Outdoor Camp Stove. I can see this being used for soups, chili, cast iron skillets for breakfast in the morning … all without taking up space on the picnic table and risking burning someone on the arm. This thing would be quite versatile in any camp I’ve been part of. 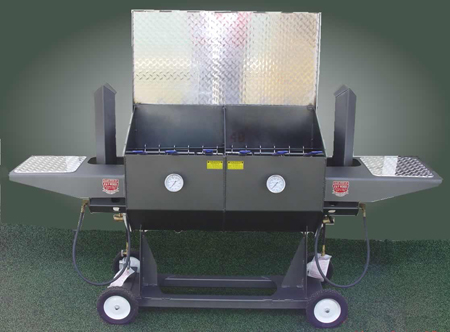 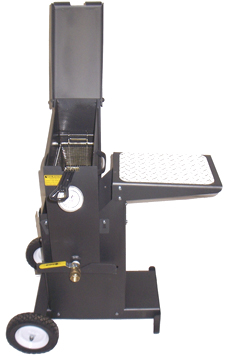 As to deep-frying, I’ve seen these beasties in stores and I’ll tall you what, I’m impressed! R&V Works manufactures these deep fryers in single, double or triple configurations. Carts are avaible to double some of these up, making quad and sextuplet fryers, like the one shown above. The folks running the Lenten Fish Dinner at the American Legion Post here in Luna Pier could have used one of the six-basket units, with two baskets each for the Alaskan cod, the breaded shrimp, and the hand-cut French fries. They use three electric deep fryers for all of this, which together end up costing about twice as much as the R&V Works cart unit. And since the cart unit uses standard LP gas, its operation costs are a little bit less over the long run.

Going camping this summer? Are you involved at all with the cooking for a local Scouting troop or campground? Is there some special event you’d like to cook for? Or do you want to get a serious start on some great tailgating equipment? All of this gear, and plenty more like it, are out there in outdoor supply shops and on the internet for ordering. Get to it!