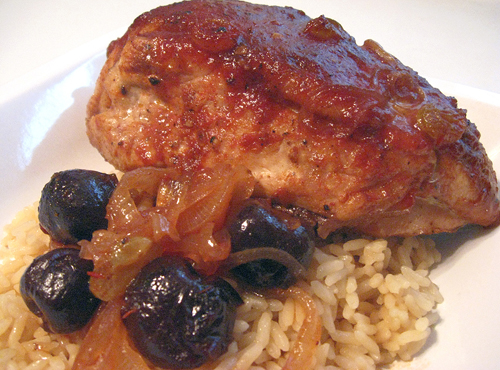 A serving of Cherry Chili Chicken from the book Cooking Jewish, plated on a bed of buttered white rice. Click on any of the images in this post for larger versions.

Recently Mary and I have become very interested in what might seem an odd combination of cross-cultural holiday celebrations. A few years ago one of the Toledo television stations, 13abc, did a batch of Sunday morning live shots from an event my wife and her girlfriends were having, a fund-raiser for one of their own who has multiple myeloma. The young reporter they sent out, Zack Ottenstein, hit it off so well with Mary and I that before he left he handed me his card, wanting to get together with us outside broadcasting. Since that time he’s become a dear Jewish son to us Christians, and an older brother to our six kids.

A couple years ago Zack had his first Christmas Eve dinner with us and some of our friends here in Luna Pier. An hour prior, he called to ask, “Do I need to wear a suit? I’ve never been to one of these things!” One Christmas after we gave him a Hanukkah card he performed the proper candle ceremony with us … and then promptly helped us finish decorating our Christmas tree.

A year ago last March when this here German Lutheran was holed up in a Catholic hospital, Mary found the book Cooking Jewish in the hospital’s gift shop and bought me a copy. We love this book! There are some incredible recipes in here and while there are no photos of the completed dishes it’s not difficult to visuallize how they’d turn out. (As you can see in the photos, the Cherry Chili Chicken was beautiful even while it was being prepared.) But what’s even more endearing about the book is the whole “family” aspect of the overall writing. The family tree is laid out, charts indicate which family member is related to which and how that happens (i.e., Fanny Vitner is Silvia Robbin’s mother), and a written history goes back over 100 years.

Yesterday evening Mary made Hilda Robbins’ Cherry Chili Chicken from Cooking Jewish and Zack joined us for his 27th birthday, along another serving of this dish. Of course for dessert he had to have the Chocolate Chip ice cream with sprinkles. We’re all still kids after all. 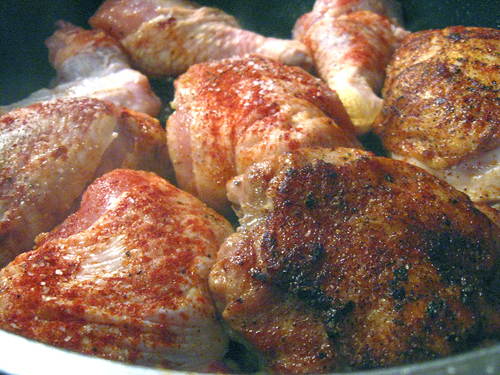 The seasoned chicken being browned in a large skillet. Note how the pieces progress from unbrowned at top-left to browned at bottom-right.

This recipe makes a lot of food. The book says it serves 8 but take a closer look. There are two chickens 3 – 4 lbs each, each cut into eight pieces (Mary had to spread it out between two roasting pans). Depending on what you might be serving this with, and what your family’s appetite is, serving 10 – 12 people isn’t unreasonable.

We love the concept of using this as a cross-cultural Easter dinner dish (I mean, hey, Christ was Jewish) with a distinctly Michigan bent (i.e., cherries with chicken), particularly since Mary’d bought the Jewish cookbook at a Catholic hospital for a German-Lutheran and used PAPA Sweet Hungarian Paprika (available at Kroger) when preparing the dish. I think the chickens may have even been Amish …

A few changes we made were to use golden raisins vs. dark raisins, granulated garlic instead of powdered, and a Chardonnay for the white wine. Mary also served it on a bed of buttered white rice.

With the publisher’s permission I’m going to include the preface to this recipe from the book itself so you can see how delightful this book is. 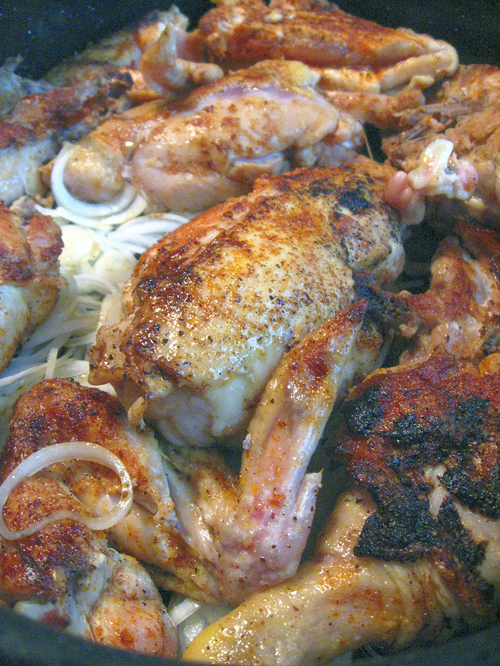 The browned pieces of seasoned chicken being loaded into one of two roasting pans lined with sliced onions.

For some it’s a rabbit’s foot. For others it’s a lucky penny. For me it’s Cherry Chili Chicken.

My lucky recipe was Aunt Hilda’s specialty, her decades-old signature dish, eagerly anticipated by all (although she just called it “holiday chicken” – I always was a sucker for alliteration.) Sweet yet zippy, pretty plump cherries peeking through the piquant sauce, Aunt Hilda’s holiday chicken ushered in countless New Years, heralded scores of birthdays, and graced many a holiday table.

When the self-published Melting Pot Memories came out I noticed a very strange thing. Everyone who told me they were trying the recipes seemed to start with the same one. How odd is that! You guessed it … Cherry Chili Chicken. Then four food editors who featured my book in their various publications also selected the Cherry Chili Chicken to highlight their holiday stories. So forgive me if I attribute magical powers to this recipe!

But where did it come from, I wondered. After much research I found a similar recipe called Chicken Jubilee in that fifties classic, long out of print, called Thoughts for Buffets. Did Aunt Hilda own that book? Cousins Bonnie and Jackie don’t remember it. We’ll never know.

1. Put the raisins in a small bowl and pour the juice from the canned cherries over them. Set aside.

2. Preheat the oven to 350 degrees F. Scatter the onion slices over the bottom of a large baking pan or roasting pan. Set the pan aside.

3. Season the chicken with garlic powder, paprika, and salt and pepper.

4. Heat 1 tablespoon of the oil in a large skillet over medium-high heat until it is quite hot but not smoking. Add the chicken, in batches, and cook until browned on both sides, 3 to 4 minutes per side, adding the remaining 1 tablespoon at a time, if needed. As the chicken pieces brown, arrange them, skin side up, on top of the onions in the baking pan.

5. Remove the skillet from the heat and discard all the oil. Add 1/2 cup of the sherry to the skillet and scrape up all the brown bits. Stir in the chili sauce, brown sugar, 1/4 cup water, and the plumped raisins with the cherry juice. Bring the mixture to a boil, and then pour it over the chicken. Roast, uncovered, basting occasionally, for 25 minutes.

6. Pour the remaining 1/2 cup sherry around the chicken, distribute the cherries throughout the pan, and baste. Roast, basting occasionally, until cooked through, 20 to 30 minutes.

7. Transfer the chicken to a warm serving platter and cover to keep warm. Strain the liquid into a medium-size saucepan, reserving the solids. Bring the strained sauce to a boil over medium-high heat and boil until reduced by about one-third, or until thick, 8 to 10 minutes (longer if you like a thicker sauce).

8. Spoon the onions, cherries, and raisins over the chicken, and pass the sauce. 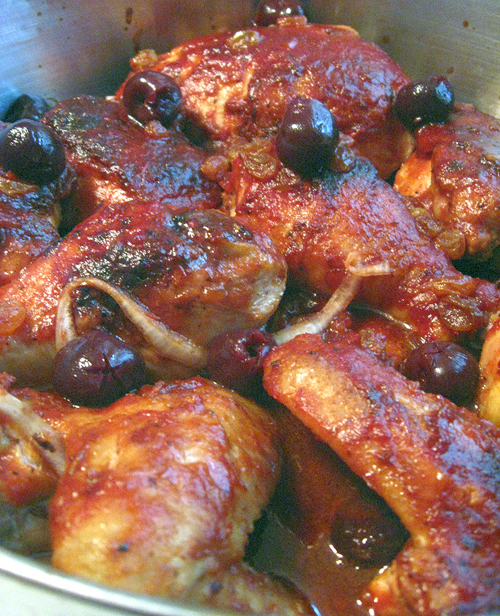 Cherry Chili Chicken, after 25 minutes of roasting, topped with cherries and basted.