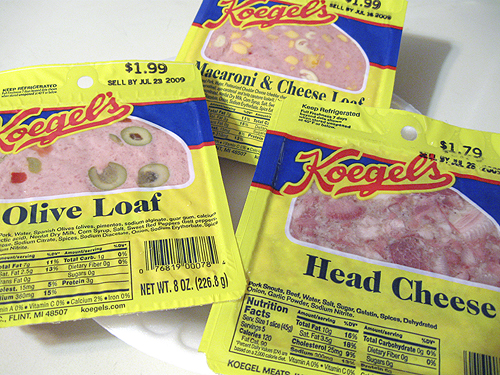 A few months ago I posted about one of my favorite lunchmeats, Koegel’s Macaroni & Cheese Loaf.  Grit Magazine Editor In Chief K.C. Compton had inspired me to write about the lunchmeat, and I’ve been itching since to write about my other two faves.

The one is Koegel’s Olive Loaf, made with Spanish olives (complete with pimientos), red bell pepper, and good beef and pork. The olives don’t really get cooked in this loaf so, imagine if you will, simply adding olives to a good lunchmeat on a sandwich. That’s the flavor you get. Add some good mayonnaise, a solid bread and maybe some meunster, and you may as well skip going to the deli.

The other lunchmeat? Head Cheese. This is the kind of thing a lot of people would go out of their way to avoid.

Head Cheese gets a bad rap because not only does it sound nasty, it’s totally misunderstood. The fact that Andrew Zimmern occasionally searches it out on Bizarre Foods doesn’t help the situation. But I’ve also heard outrageous stories, such as that it’s made of fermented pigs brains.

Going back a ways, recipes for Head Cheese, which is of European origin, use the entire head of the hog, including parboiling the brains. The 1954 Wise Encyclopedia of Cooking includes this recipe:

Have the butcher clean the head, taking out the brains and tongue. Scrub the head well and place in a deep kettle. Include the tongue but not the brains. Cover with equal parts water and white wine. Add the onion, struck with the cloves, the bouquet garni, salt and peppercorns. Bring to a boil, skim carefully, and let simmer very slowly for about 4 hours or until the meat is very tender. The tongue may be done before this; if so, remove it. Lift out the head onto a large platter and strain the liquid. Carefully remove all the rind from the head and cut the meat and the tongue into pieces the size of a large walnut. Parboil the brains in a little of the cooking liquid. Place the cut-up meat and the brains in a mixing bowl and season highly with cayenne, nutmeg and sage. Toss thoroughly to mix well. Pack the mixture into a bread pan or other mold, pressing it in firmly. Pour over it 8 tablespoons of the lukewarm broth. Cover the pan and weigh it, and let it cool. The mixture will gel as it cools. Chill at least 48 hours in the refrigerator before using.

Serve sliced, cold, with a salad or other appropriate garnish.

I can see this being developed in older countries as a way to use the entire animal in meals. This is something not normally done today, but in many countries and cultures it’s either traditional, passed down from earlier generations, or a way to ensure there’s enough food over time, or a bit of both.

The thing of it is, your grandparents, and more likely your great-grandparents and beyond, ate and enjoyed Head Cheese. Whether you do the same or not, the stuff’s in your blood. 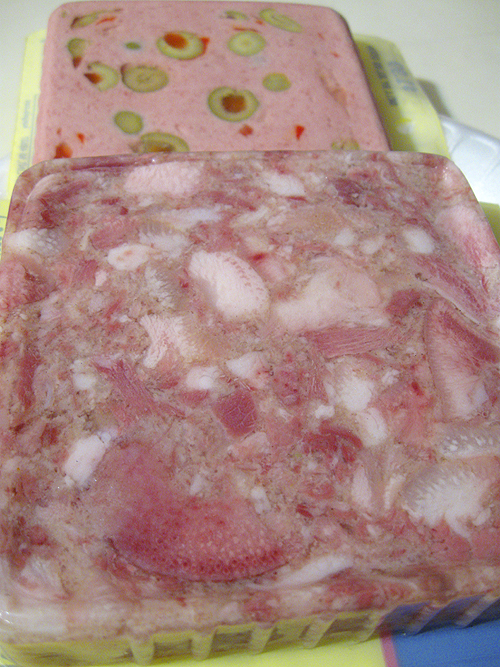 My dad got me some of the Koegel’s version, made with pork snouts and beef, in the 1960s when I was younger than 10, and I’ve enjoyed it when possible since. It seems to only be available in the Flint, Michigan, area where the other Koegel’s lunchmeats are available. Look at the prices on those packages, which are printed at Koegel’s. The other lunchmeats aren’t too expensive, about $4/lb, while the Head Cheese is less expensive. Treated as a delicacy by some markets and marked up with a much higher price, Koegel’s prices reflect the actual cost of the item better. In today’s culture, Head Cheese is a butcher’s leftovers. Don’t let them trick you into believing it’s not.

One more thing: There was a bit of an anxious moment at work the other day when I offered to break off a piece of the Head Cheese from my sandwich for a couple gals I work with. They didn’t want to try it. But the one wanted to know if it smelled bad. She ended up giving the sandwich a sniff … and was surprised to smell just the bread. Like any boiled pork that’s been refrigerated, Head Cheese doesn’t have an odor on its own. Like fish, if it does have an odor, it’s gone bad and needs to be thrown out.

Maybe it’s time for a breakfast of a Head Cheese & cheese omelet. With olives. And macaroni. Hmmm …