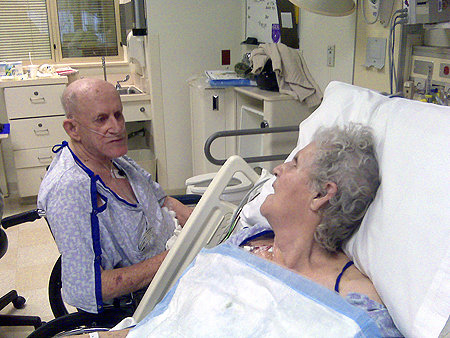 My parents at Genesys Medical Center, Grand Blanc, Michigan, in December 2008 during one of their last times together.

Note: On June 15th, my kids lost their third grandparent since December. They’ve lost both my own parents and now their Grandpa Elijah, a week shy of his 91st birthday. My heart goes out to those wonderful kids of mine.

There used to be a restaurant chain called Bill Knapp’s here in the midwest. Some parody I heard somewhere mentioned a ‘Blue Hair Special’; A single, lukewarm salt-free egg, some barely-toasted white toast with no butter, and a half-inch of orange juice in a tall glass. Leftovers would be re-plated.

Sometime last year at dinner at my parents’ house I asked dad for some milk. I got an inch of milk in a tall glass.

I loved my parents, loved them deeply, dearly, and always will. But sometimes they were just plain funny when it came to food. 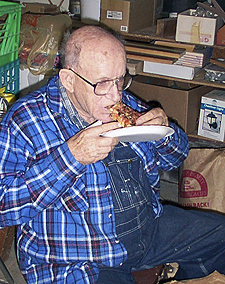 My dad refused to eat melted cheese. My whole life dad would have no grilled cheese sandwiches, none of mom’s exceedingly popular Velveeta Macaroni and Cheese, none of the Philly Cheesesteak sandwiches I’d make, none of Barb’s Chicken Cordon Bleu … not even a cheeseburger. He always said it was “a texture thing”, that he was never able to get past how the melted-but-partly-resolidified cheese felt in his mouth.

But then there’s this picture. I took this pic of dad eating pizza in his garage on Halloween night, 2003. We had the garage door open and the trick-or-treaters could come right in and get their requisite candy in a well-lit room. For those kids mom and dad knew (which was most of them), there were, like, eight pizzas as well. And dear old dad just plated some up and started munching away! Of course he would deny it later, making the “I can’t stand cheese” claim all over again. But see dad, I have this pic …

Mom was taught cooking in what was considered “the old days”. Her staples were meatloaf, baked chicken and baked pork chops. For the chicken and pork chops, for decades she would brown these in a skillet on the stove prior to putting them in a pan to bake in the oven. She was taught this back in the 1930s and 40s when illnesses from these meats and poultry were considerably more common than they were even in the 1960s when I was little. She never really did change this habit at all simply because none of us ever thought to tell her these ingredients are safer now. Besides, the chicken did end up with that nice, crispy skin …

Mom came from a long line of what might be termed “servant women”, ladies who waited on you hand-over-foot whenever you were in their presence. Her mom, my Grandma Ella, and Ella’s sister, who even I called Aunt Fern, would continually serve you when you were eating at their home. I recall grandma not even having a chair at the table. Ever. Not once did she sit down with us. That is, until I made her … I was probably 16 or so when grandma’s being in the kitchen when a dozen-or-so of us eating at her table got the best of me. I grabbed another chair, made room next to me and made her a place-setting. I remember Grandpa Richard saying, “David, I don’t know why you’re bothering …” The next time grandma came to the table, I took whatever it was she had in her hand and led her, confused and bewildered, to the empty chair. She sat there all of about 10 seconds. Grandma then mumbled, “I can’t do this”, got up, and headed back to the kitchen. I left the chair there, just in case, for the rest of that meal. I never did try again.

My mom and her sister Doris … they’re kinda the same way as those Ostic women were. Not as much, but you could see it. You’d be right next to something on the counter, turn to get it, and they’d come from the far end of the table to get it for you. My kids have this same gene, waiting on people like crazy when the situation calls for it. At our wedding reception in 2005, little 8-year-old Ryan spent the whole time with a water pitcher in his hand, making sure every one of the 100-or-so people in the hall had fresh water at all times. At the age of 12 now, he still works that way.

Maybe when the next generation takes over, it won’t be so bad after all.