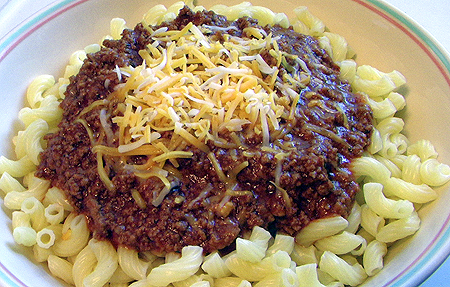 One of the meals John said he learned to enjoy during his recent U.S. Marine boot camp on Parris Island, South Carolina, was a simple Chili Mac. He’s always liked plain macaroni with a little butter, and would eat mild chili on occasion when I made it. During boot camp the past few months he’s decided he likes the combination.

But frankly, I have never made Chili Mac as a whole dish. Why?

Because I can’t stand the stuff.

I’ve always thought of Chili Mac the way most people think of Tuna Noodle Casserole. It’s what you make when there’s nothing else to make. Tuna Noodle Casserole is grabbing cans of tuna and green peas, throwing them together with whatever cooked noodles you have, along with any possible “Cream of …” soup that’s in the cupboard, covering the whole of it with shredded cheese, and baking it till it’s crisp on top.

For Chili Mac it’s even simpler. Heat up some canned chili, cook off and drain some macaroni, throw the two together, and plop it down in front of a hungry Marine.

Ideal Hot Dog in Toledo does their Chili Mac differently. While serving a homemade chili sauce they developed back in the 1940s, they serve it over spaghetti noodles instead of elbow macaroni.

John and I agreed Ideal’s version is more of a Chili Spagh.

My line of thinking is, if you’re into Chili Mac, try a traditional American Goulash. It’s just tastier.

But John likes Chili Mac now. And before the Marines transformed him over the summer, he would rarely eat my cooking.

So last night, I made Chili Mac.

The noodles-of-choice for Chili Mac are Barilla Elbows. These noodles are, “… ridged but also has an extra twist[. N]ot only does this give the Barilla elbows a more sophisticated shape, but helps to hold the sauce as well.”

For the chili sauce, I decided a good starting point would be the Coney Sauce recipe we served over the summer at the beachhouse concession. After making some blatant changes to the recipe itself, I was able to wing a chili sauce that was meaty both in structure and flavor. I then topped the dish with the same kind of shredded cheese I use on chili, vs. the shredded Parmesan most folks top spaghetti with.

Most importantly, our Marine ate it well, while Caleb and Aaron each had two bowls. I didn’t think it was too bad myself, actually …

In a 4 – 6 quart pot, brown the ground chuck until tender, then drain and return to the pot. Add the tomato sauce and heat through over low-medium heat. Add the garlic, ground mustard and chili powder and stir well. Add salt and pepper to taste. Set for low heat and allow the sauce to simmer.

Cook the noodles as per the instructions, then drain.

Serve with the noodles and sauce stirred together, or as noodles topped with sauce. Top with shredded cheese and/or sour cream if desired.