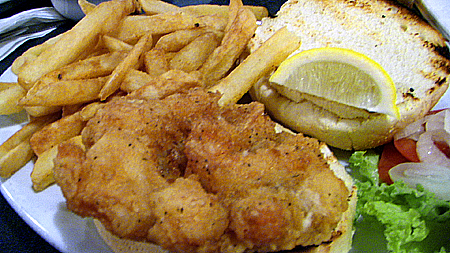 A shrimp … burger?? Shrimp BURGER. That’s what the menu said. I like shrimp. I like burgers. But a SHRIMP burger. Who’d-a thunk it? The menu also said, “Our own special recipe loaded with shrimp – You must try it!!” Must try … hmmm … 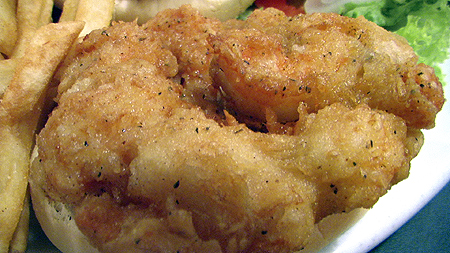 Check that out. Click on the pic and check it out even closer. Looks good, eh? Yeah it does. And you know what? It tastes even better than it looks. Yeah, this was mine. All mine. Quite a bit of peeled shrimp, about 1/4 pound, in a tasty batter, formed into a patty, and fried, then served in a grilled bun with lettuce, tomato and onion. Gnarly good, that.

So what the bloody schmutz does this have to do with the film Forrest Gump? Well, lemme tell ya. And then I’ll tell you about this particular burger and some other great food in South Carolina …

Gump fans, take a good look at these next couple photos. Go ahead, take a minute. 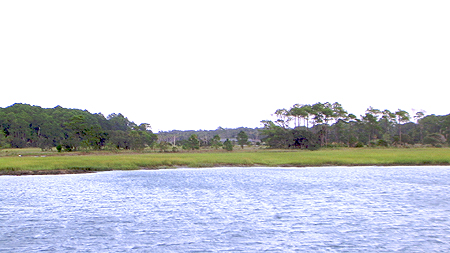 Oh, right … click on these two pics. They’ll get bigger.

Look closely at the far set of trees in this next one: 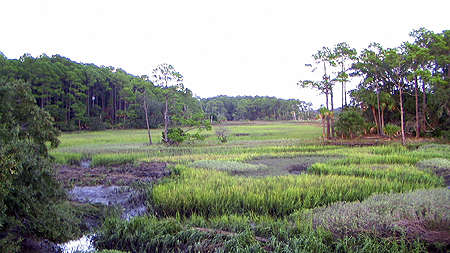 Recognize anything? Maybe? I kinda did but couldn’t place it, even before a fisherman on the pier we were standing on pointed things out. Something just seemed very familiar … This is Hunting Island, east of Beaufort, South Carolina after the end of highway 21. The treeline in that first image? Just the other side of it was where the camp was where Forrest and Bubba first met Lt. Dan. And if you look at the trees in the distance in the second image, you can just about see Forrest running out of there with Bubba’s body, the bombs going off behind him. 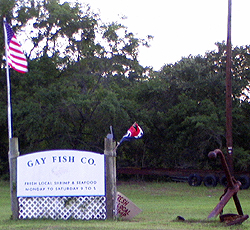 Back up highway 21 a few miles is the Gay Fish Co. on St. Helena Island. This is apparently one of the more popular fresh seafood suppliers along the South Carolina coast. Googling the company’s name you’ll find all kinds of references to it, including this one from yelp.com: “I stop by Gay Fish Co Inc. everytime I go to hunting island. There seafood is always tasty, fresh, and cheap. I highly suggest this place. If you like the seafood here, go to the Shrimp Shack across the street. I heard that they use the seafood from Gay Fish Co Inc.” But then, looking further at the Yelp page, you’ll find this: “Shrimp boats line the docks with a backdrop of the lowcountry marsh, which provided the natural “set” for scenes of Forrest Gump.”

Take a look at this next photo, of those same shrimp boats in the marsh behind the Gay Fish Co.: 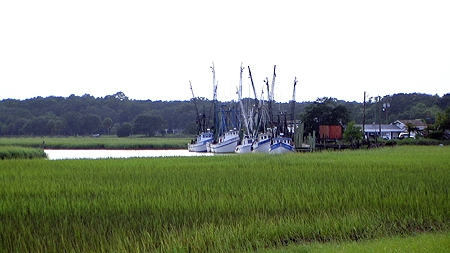 While making our waffles the morning after our visit to this area, Jo Ann at the North Street Inn told me her sister went to high school with a Hilda Gay, and that one of these five boats is the “Hilda Gay”.

The review on Yelp stated, “… go to the Shrimp Shack across the street. I heard that they use the seafood from Gay Fish Co Inc.” Jo Ann referred to this place as the “Gay Shrimp Shack”. I’ve found there’s a reason for that …

There’s a recipe here for Traditional Lowland Shrimp Burgers, which includes text from a New York Times piece. Part of that text reads as follows:

Hilda Upton, nee Gay, apparently developed the best shrimp burgers there are, according to the New York Times. And her namesake boat … the “Hilda Gay” … was Forrest’s.

After shooting the photo of the sign at the Gay Fish Co., we did head across the street to the Shrimp Shack. Unfortunately, it was 7:30 p.m. and they close at 7. That’s why we ended up at Boondocks a few miles west, where I coincidentally and unknowingly ordered their version of Hilda Gay’s creation. 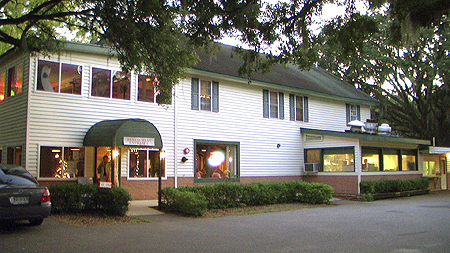 This two-story sports bar and seafood restaurant was in the middle of nowhere. Gee, maybe that’s why they call it “Boondocks” … but I counted over 20 cars in the parking lot! The waitress even had to clear a table to seat us. If a place this far from civilization can have that much business on a Friday evening, well, yeah, that’s the place to eat! The little room on the far right with all the windows is the exhibition kitchen that you can only look into from the outside. And there’s a chef, Chef Mark, whose name is all over the menu.

Inside, the dining room we ate in was comfortable, and the people were quite friendly. Mary chatted with people at nearby tables, who started the conversations even before our menus arrived. This is a seriously homey place. 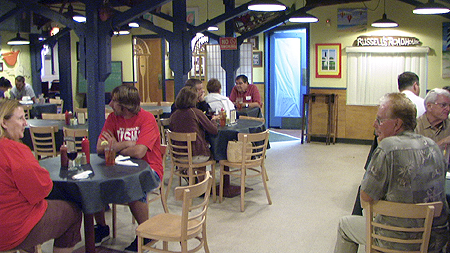 After taking forever to pick what I wanted from the menu that simply had so much good-sounding stuff on it, we started with the Fried Calamari (“It’s squid, but don’t tell the kids cuz they won’t like it then”) appetizer (or, as the menu referred to them, “Sometimes people eat these before dinner”). 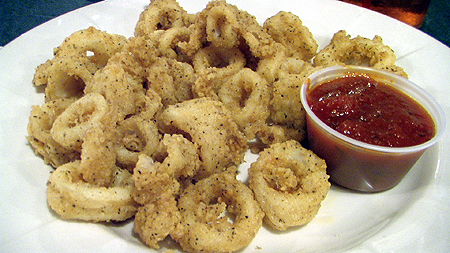 I’d never had calamari with marinara and found it to be quite good. This calamari wasn’t as chewy as most … probably because it was fresher.

And finally, Caleb had the 14 oz. Ribeye Steak with baked potato and hush puppies. There was no way he could finish this thing, and probably left a third of it. 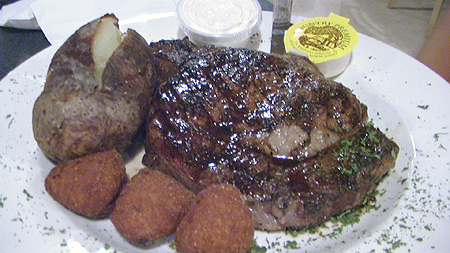 This is the last post I plan to do about this particular trip. However, I don’t think we’re done visiting the area of Beaufort, South Carolina. We loved it too much. The people were friendly, the scenery was stunning, and the weather was the best it could have been. We’ll have to take Pvt. Winckowski back there so he can really see where he lived for almost three months … without actually seeing any of it.