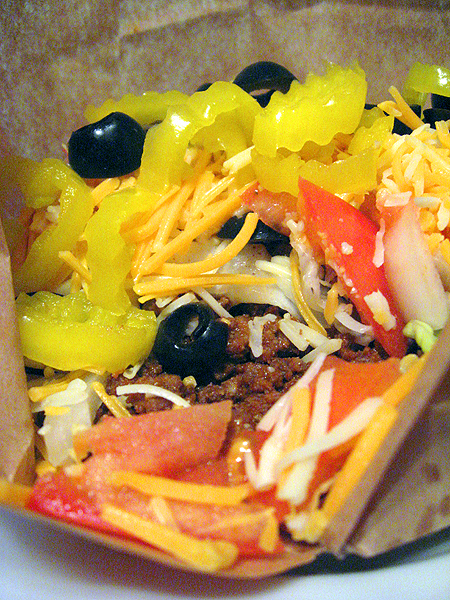 Back a couple months ago, Dawn Shock retired as librarian at the Rasey Memorial Library here in Luna Pier. She’d been here for quite some time, and was an incredibly hard worker. She set up the hours at the Rasey Library in such a way that it mirrored the hours at the library over in Erie. That way, she could operate both libraries at separate times! She was also Luna Pier’s official historian, and had things stashed and catalogued all the way back to the Prohibition era and before. Her retirement has left a huge space in how things work in those areas.

So it was a pleasant surprise last week to run into her again! Of course she and I talk food on occasion, and she had a good one this time.

It seems up in Ludington, Michigan, and places near there, they offer a thing called a “Walking Taco“. (In looking into this thing, I even found it on the lunch menu for the Catholic school in Ludington.) The way she described it, Fritos are crushed into a lunch sack, taco meat is dumped on top, then lettuce, tomatoes, shredded cheese … you then just grab a fork and eat it out of the bag. Dawn said she’s had others and there’s nothing as good as the ones in Ludington.

I looked into this thing, and it’s real easy. I did find a few variations on the theme depending on the target eaters, but really, there’s nothing to it.

Basically, you make a Walking Taco it the way Dawn described. That’s all, plain and simple.

Another method is to crush the Fritos withing their own individual serving bag, leave ‘m in there, and pile everything on top.

Just use a commercial taco seasoning such as Old El Paso or whatever. I make it a bit drier, only adding 1/4 cup water vs. the 1 cup of water the package calls for. But for this batch I used the bulk mild taco seasoning from GFS Marketplace, mixing 1/3 cup water and 1/3 cup taco seasoning for each pound of browned ground beef. I also added mild banana pepper rings and sliced black olives to mine, along with a bit of chopped onion.

This is a good mix-and-match meal that would make a great little taco bar for a picnic buffet, particularly for kids. And one of these days, we’ll get up to Ludington for what retired librarian Dawn Shock calls “the good stuff”.