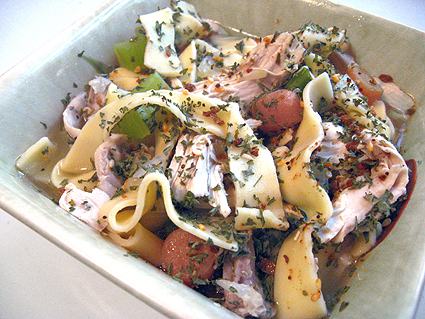 Click here for an updated version of this recipe, posted on January 14, 2019.

So yesterday evening the 6 p.m. news starts on Toledo’s 13abc and it’s our buddy Zack Ottenstein, anchoring by his loneseome self as he has done quite a few times this past week. About a half hour after the broadcast ends, the phone rings and we’re able to let him know how good he’s getting at that gig in a very short amount of time. Then he finds out Mary’s been sick, and immediately wants to know Why I’ve not made her any of what he calls, “Jewish Penicillin.”

I can see it now; “Tonight at 6, 13abc’s iTeam investigates the lack of Jewish Penicillin in Luna Pier. Zack Ottenstein will be live at the home of the Mayor-elect …”

Oy to the gevalt! I’m such a meshuggeneh …

With so many people being sick this time of year, our “Jewish son” has a great point. Chicken Noodle Soup has always been what mothers and grandmothers of many cultures have used to take care of their own. It’s a useful traditional remedy.

Of course I know how to make Chicken Noodle Soup. I’ve made it for Mary before when she’s been sick, as I have with my kids. They love it, the kids being able to eat it apparently by the gallon. I just hadn’t made it for her this time around.

So this morning, I did just that. Mary had some for lunch, and felt so much better she fell back to sleep almost immediately, after mumbling something about likely having more of the soup later.

Now, there are cheats to be had in making this soup, such as using elbow macaroni instead of noodles, using commercial broth or those nasty boullion cubes that you dissolve in hot water, or even, God forbid, using a soup starter.

A Yiddish grandmother would toss the resulting stuff right out the third floor window into the alley, hopefully hitting a couple or three scrungy cats. It wouldn’t be worth nuthin’ else.

This version isn’t Jewish, Yiddish or even Kosher. Not only is it simply traditional, the noodles are downright Amish. While you could use what’s called an egg noodle for this soup, the texture and flavor get kicked up by using the extra wide noodles from Das Dutchman Essenhaus in Middlebury, Indiana. You can either order these noodles online, or do what I did and pick them up at any Kroger that happens to carry them.

The grocery list for this recipe is easy and inexpensive, and includes no commercial broth or boullion. The resulting soup is thick, rich and comforting, so much so that you should watch how much you take as you may not be able to finish it.

The key to making this soup as nice as possible is in the timings. Carrots and celery will cook at different rates. As people want both to be al denté these veggies need to have different starting points in the pot. We’ll also cook the noodles separately and add them at the end so they’re cooked just right. And finally we’ll use the whole chicken, as the combination of the different meats will impart a richness to the soup that diners, even whose who aren’t feeling well, will appreciate.

Update, Dec. 30, 8 p.m.: After the 6 o’clock news this evening, the phone call came again. The anchorman had found out I’d made this soup and was asking if he might head up here for his dinner hour. Two apparently satisfying bowlfuls later (and another quart of the stuff headed back to the studio) and I realize I’m obviously no longer in danger of a 13abc iTeam investigation for a lack of Jewish Penicillin in the home of Luna Pier’s Mayor-Elect.

Skin the pieces of chicken, cutting the tip section from the wings and discarding. Place the chicken (including giblets if so desired) into an 8 quart pot. Add enough water to cover the chicken plus about half-an-inch, then add a couple tablespoons salt. Set the pot over high heat and let it come to a boil.

While the chicken is boiling (add extra cold water along the way if necessary), clean and peel the carrots. Slice them to be 1/4″ to 3/8″ thick. Cut the white ends, tops and leaves from the stalks of celery, then slice to be 1/4″ thick. Finally, skin the onion and give it a coarse chop.

The chicken is done when you can begin to pull the meat from the bones of the larger pieces using a fork. When this happens, remove the chicken from the boiling broth to a bowl so the chicken can cool. Add the carrots to the still-boiling broth and let them cook for three-to-five minutes, until they’re about halfway cooked. (You can check this by removing one and biting into it.) When they’re halfway cooked, add the celery and onions. Continue cooking a minute or so, then remove the pot from the heat. Cover the pot so the veggies and broth will stay hot, and set it aside.

Discard any of the chicken pieces you may not want, such as the neck, heart, etc. Using your hands, remove the meat from the bones of the other pieces, then gently tear them into bite-size chunks. Add the chicken meat back into the broth and cover again.

In a 6-quart pot, bring water and a tablespoon of salt to boil over high heat. Add the noodles, and cook until al denté. Drain the water from the cooked noodles (don’t rinse!) and add the noodles to the rest of the soup, gently folding the noodles in so they don’t break.

To serve, ladle the soup into bowls, topping with parsley and a light sprinkling of the salad seasoning.