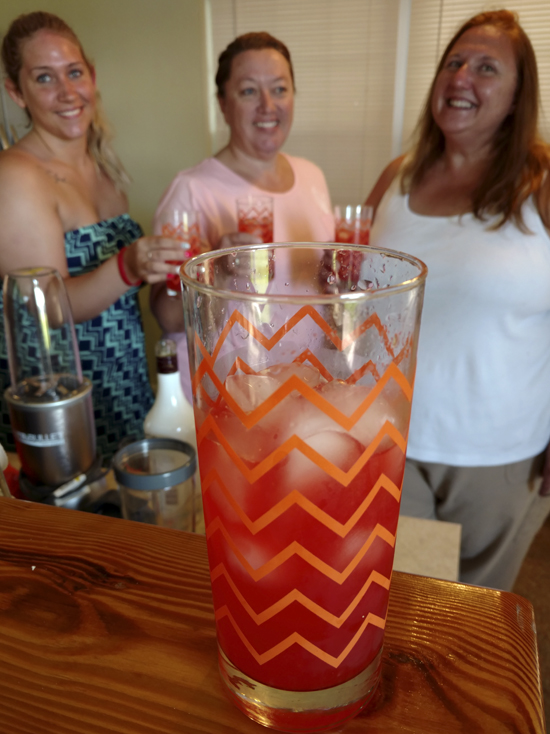 Our bartenders for this development: Bree, Kim, and Mary.

A habit we’ve started getting into the past couple years is vacationing on the east coast of Florida. As I write this, I’m sitting in a beautiful little duplex on the Indian River in Ft. Pierce. We had come here just over a year ago and fell in love with St. Lucie County and the surrounding area, along with really appreciating the people here, both the locals and those who are also habitual visitors. Arriving here from Michigan again last week, the duplex made us feel as though we had come home. Because of this feeling, we’re already making plans to come back next year as well.

The duplex is owned by our friends Kim and Bill. Kim and my wife Mary had gone to high school together, and Kim and Bill rent the duplex out to various people throughout the year while living in their own home up the river. Built in the 1950s or early 60s, this quaint little duplex is simple, with hurricane-resistant concrete block walls covered with stucco, and poured terrazo floors. But the couple has really warmed up the interior with just the right furnishings that give it that strong feeling of home. 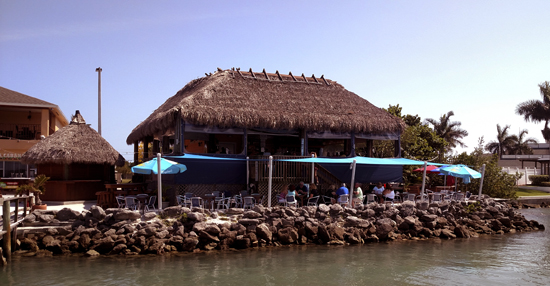 On our first full day here last April Kim had driven us up the road a piece to the On The Edge Bar & Grill for lunch. Located on the north end of South Hutchinson Island along the Ft. Pierce Inlet that allows for boating and small ship access (Coast Guard cutters, heavy barges, small cruise liners, deep-sea fishing vessels, etc.) to the two-mile-wide Indian River, the restaurant is open-air with two levels. 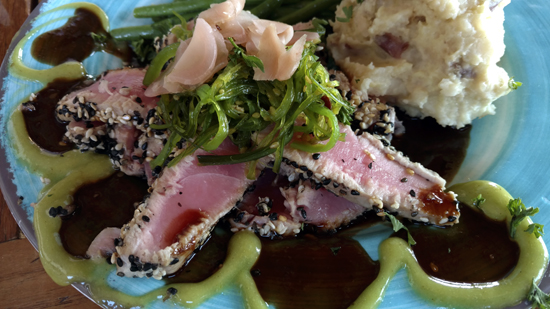 My Hoisen-Glazed Yellowfin Tuna at On The Edge Bar & Grill on May 9, 2017: Sushi-grade Ahi Tuna seared rare, with hoisin glaze and wasabi mayo, topped with a seaweed salad and served with sides of wasabi mashed potatoes and grean beans.

The food at the restaurant is seriously good, especially the seafood. From their Facebook page:

“All of the fish served at On the Edge Bar & Grill is fresh, locally caught & never frozen. Our Mahi-Mahi, Swordfish, and Tuna, in particular, are caught in deep water, approximately 150 miles offshore to the northeast of Fort Pierce. These fishing boats consume about $6,000 in fuel for a round trip that can last up to 3 days.

If you don’t understand why fresh seafood can be expensive, read that again. But also understand the prices on the menu at On The Edge are extremely reasonable, and are actually comparable to those at better seafood restaurants in places like Toledo and Ann Arbor. The seafood at On The Edge is better though, and worth the trip.

It was at On The Edge during that lunch with Kim that Mary had her first-ever Rum Runner. Legend has it that the Rum Runner was first developed at a place called the Holiday Tiki Bar in Islamorada (“ah-lah-mor-ah-dah”) sometime in the 1950s when there was “an excess of rum and certain liqueurs that needed to be moved before the arrival of more inventory.” This makies sense, as a lot of dishes, from casseroles, to “Chef’s specials”, to Polish paczki for Fat Tuesday, were created this way and always will be. 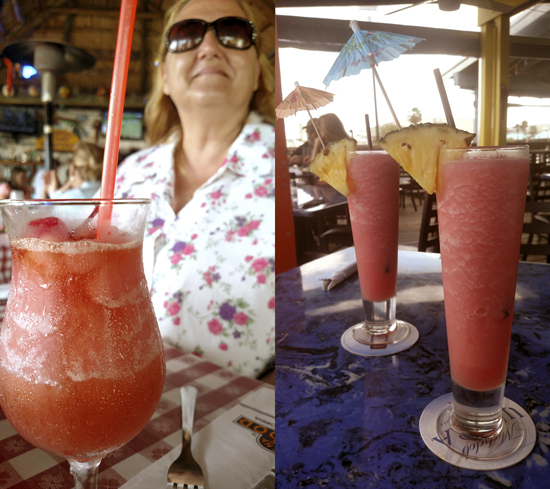 Some of the Rum Runners from our trip here in April 2016.

Throughout our travels here over the past couple years, from here at the duplex through the 220 miles to Mile 0 at the southern end of US 1 in Key West 90 miles north of Cuba, Mary, Bree and I have tried quite a few Rum Runners at various establishments. There are apparently countless variations: One bar here in Ft. Pierce also has a package liquor store, and they specifically told me they use the Ron Corina 151 dark rum in their version, and sold me a bottle. This made for a Rum Runner that was far too strong, and not at all like Mary is used to.

In trying all those other Rum Runners though, the flavor profile we appreciate most goes right back to On The Edge. We ate there again yesterday evening with a friend of Bree’s from high school who lives down here now and came to visit. The Rum Runners were, to our taste buds of course, absolutely perfect.

A couple evenings ago we hosted a shish kebab party for Kim, Bill and their two sons. Bree and I prepped chicken thigh meat, 51/60 p&d shrimp, as well as fresh veggies from the renowned Ft. Pierce Farmer’s Market. People made up their own kebabs on bamboo skewers, which I then grilled for them, serving with chips and hummus. One of the neighbor families also showed up, which was a good thing as Bree and I had prepped a lot of food!

Between us we had also put together the rather expensive list of ingredients needed for Rum Runners, as laid out on the Florida Keys Guide web site. Restaurants and bars with larger liqueur inventories will certainly be able to have most of this on-hand for various beverages. It does get a bit unwieldly for two or three people, but if you regularly enjoy Rum Runners this shouldn’t be too much of a problem.

Bree, Kim and Mary put together the Rum Runners, and the flavor was extremely close to what On The Edge serves. Yup, it made for a fun evening!

The ingredient list below is fairly specific. This combination comes quite close to what On The Edge is doing, but we make no claim to it being exactly the same. Make substitutions as is necessary or as you see fit. Your own recipe may be completely different. Amd that’s alright.

Authentic Florida Rum Runners
Add one ounce of each of the following to a glass, or add multiples of one ounce each to a pitcher, and stir well:

Add one cup ice to each glass, and serve.
If the frozen slush version is desired, pour the completed drink with ice into a blender and run until the desired consistency is reached.