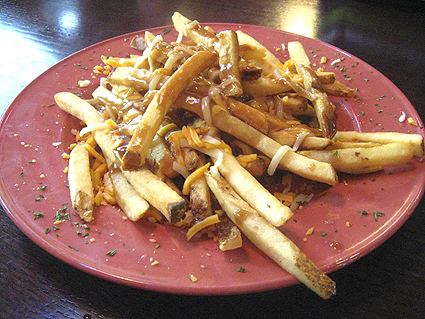 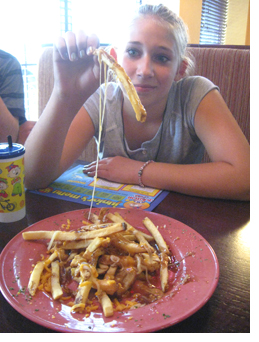 One of the activities my kids and I enjoy is watching Chilly Beach, on channel 9 out of Windsor at noon most Saturdays. Chilly Beach is one of those shows that’s stupid enough to make you laugh out loud at the absurdity of the whole thing. But then, once the show is over, ranting about how stupid it is, you’re off on the computer, scouring the internet for where to buy the DVD box set as you just have to see more of the stupid thing. In this case, think The Simpson’s meets The Great White North and South Park, but without all the common sense.

Ok … without any common sense.

I mean, once each year, instead of South Park‘s Kenny getting killed all the time, in Chilly Beach only one person gets killed. Where they keep getting more Santa Claus’s to feed to the polar bear is beyond me …

These pics were shot at Crabby Joe’s in Wallaceburg, Ontario. When the kids found out we might be headed to this restaurant this past weekend they were all bugging us about trying the poutine. Mary and I had been there a year before and had the poutine, and were not impressed. Fries, gravy, shredded cheddar and mozzarella cheeses … and it was soggy, all of it. But, the kids kept asking, so off we went.

As you can see in the first pic the poutine looks pretty good. This time none of it was soggy either, which was a big plus. But look at Briahna in the second pic. Yeah, that face. The one that looks as though it’s going to turn green from nausea and faint. None of the kids really liked the stuff. They were all wondering what the big deal was about poutine.

But … and I mean this … the plate ended up being hungrily emptied by those same kids who said they didn’t like the poutine. Weird, that …

We go to Crabby Joe’s because the food is quite good, poutine notwithstanding. Here’s a serving of my serving of lasagna, with just the right amount of sauce (not too much) and some incredible spices. The hunk of herbed garlic bread on the edge of the plate was crunchy on the outside, and warm and soft on the inside. 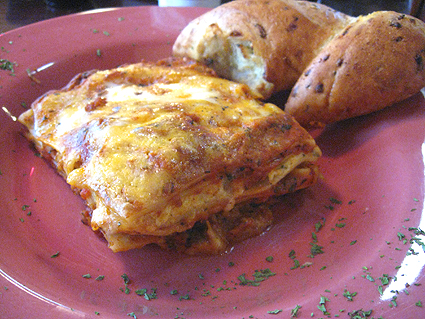 Crabby Joe’s is a nice place to eat, and as it’s also a sports bar, there’s always a game on a screen somewhere in the rooms. But the poutine? I’ve been there twice, and I still don’t know. Maybe next time … eh?