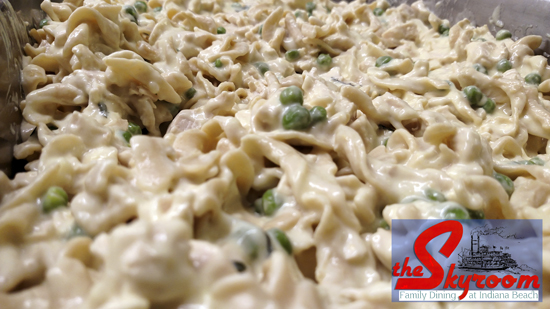 A batch of Hoosier Chicken & Noodles in the Skyroom Kitchen at Indiana Beach Amusement Resort, Monticello, Indiana, made by Chef Buddha on June 14, 2015.

The summer of 2015 was … odd for me. Back in 1979 I’d spent the summer cooking at a YMCA camp in Irons, Michigan, and had a hackuva time up there. I was fresh out of high school and on my own for the first time, cooking three meals a day for kids out of central Chicago. To say there were problems was an understatement, but those ten weeks were still a lot of fun. I never thought I’d do such a thing again.

So it was strange this past May 6th for me, a 53-year-old man, to head out at 7 in the morning to drive five hours to an amusement park in central Indiana, driving away from my wife, kids and grandkids, to what was supposed to be only a 100-day position running a 50-year-old restaurant at the park. Getting there at noon, there was a Sysco truck waiting, along with the people I’d spend the whole summer with. We spent the next eight hours putting things away and starting prep for the Mother’s Day Brunch on the 10th.

Things rarely slowed down in Monticello after that. 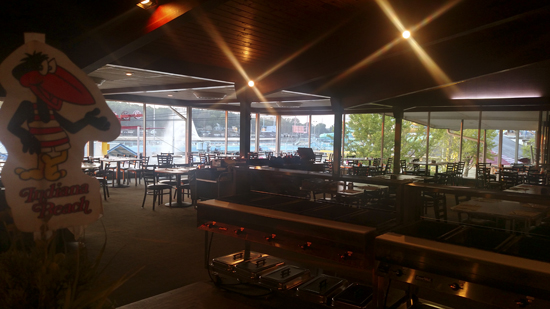 The Skyroom Restaurant at Indiana Beach Amusement Resort had an elegance over its five decades, serving Shrimp Cocktail, Prime Rib, Steaks, Salmon, Cobb Salads, even a Chateaubriand for Two. The various Chefs over the years would do Luau buffets with whole roast pig, Pasta Nights with fresh pasta dishes being made at an impromptu station in the glass-walled dining room overlooking the park, and many other special events. By the time I got there this past May tastes had, of course, changed. Diners don’t select dishes like Chateaubriand at amusement parks anymore, and we served fewer Shrimp Cocktails than ever. We still did some Pasta Nights and Luaus, but more burgers, steaks and salmon. The porkchops were alright, but when we ended up with some seriously nicer ones for a special they did better. The Skyroom has more of a “pub” feel now, which is fine. It’s still a great place to eat.

As the location is an amusement park people would come from all over to work there. Of course the locals and college kids came and went as staff, but there was an international program as well, pulling in staff from Jordan, Romania, and many other countries. Our own Jenelle Solomon, a vegetarian from St. Elizabeth, “the bread basket of Jamaica”, was there for her fifth season, grilling the best salmon and steaks anyone had ever tasted while honestly never trying them herself. Jesus “Chewy” Dominguez had come up from outside Mexico City for his 21st season this summer, and could cook up just about anything you asked him to. When he made Cream of Mushroom Soup this summer for the first time ever, just guessing the recipe while using fresh mushrooms and heavy cream with 36% milkfat, the result was astonishing. 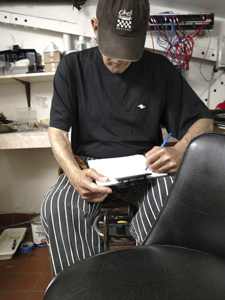 But the real backbone of the Skyroom, the man who was there for most of the restaurant’s existence so far, was Chef Buddha. Robert M. “Buddha” White had started working at Indiana Beach out on the piers at the tender age of 13. This was his 47th year at the park, most of them spent moving up through the ranks in the Skyroom until he was appropriately named as Chef. But that’s not all he did … He was also a county Sheriff’s Deputy for 34 of those years, along with being SWAT Team Commander, while spending every summer at the Skyroom. To say he was a proud and hard worker is an extreme understatement.

When I first met Chef Buddha in May I watched as the entire staff, those who had been there many years themselves, treated him like gold. I instantly understood the serious respect he had earned over the years from everyone around him. And when my wife showed up for her first of many visits to the park on May 22nd, Chef Buddha took the time to sit down with her in the dining room for a long and friendly chat.

One of the things I’d heard many times from Chef Buddha was that he had wished he and I had met earlier. We shared lot of similar interests and, as he was only six years my senior, a lot of common experiences outside of our work areas. And as I’ve developed a keen interest as an amateur food historian, he told me it was nice to have someone to discuss the Skyroom’s history with.

Early in the 2015 season I’d heard about an older special, the Sunday Hoosier Chicken & Noodles, that was apparently last served during the 2008 season. On June 5th I asked Chef Buddha about this dish. He replied it was in his head, and had simply never been written down. The Spackman’s had founded the park in 1926, and the Sunday Hoosier Chicken & Noodles special was a Spackman family recipe that was then tweaked by Chef Buddha and an earlier Chef Dave via discussions, nothing more. So I promptly asked for it. As you can see in the above photo, he wrote it down, taking over an hour to cover an entire page with the details.

After writing the recipe down for me, Chef Buddha told us Tom Spackman had the following policy: “You only serve peas on Sunday, and you’d better have peas on Sunday, and you only serve peas with this dish.” It turns out Sunday Hoosier Chicken & Noodles had defined Sunday in the older iterations of the Skyroom. It’s the kind of tradition the Skyroom’s caretakers and diners had drifted away from over the years. Without realizing it, I was just as guilty as any of them. Unfortunately, it’s doubtful those days will return.

As he was becoming quite ill, we saw less and less of Chef Buddha as the season went on, and by mid-August he had stopped coming to the Skyroom. In late September I received a text from his phone, a photo sent by his longtime girlfriend Kathy, showing them getting married on September 20th. We lost Chef Buddha to cancer on October 3rd. I was in Grand Forks, North Dakota, when Kathy sent me the news that morning. I cried like a baby.

When I think about it, I realize I had only known Chef Buddha for a couple of months. It’s amazing the kind of impact some people can have on your life over a very short period of time. There are people I proudly say are more like family to me. Chef Buddha is near the top of that list.

My wife and I have discussed my getting a Buddha figurine for the fireplace, with it wearing a Chef’s toque. It seems only fitting.

Method: Thaw and heat the diced chicken in a 4″ full-size hotel pan. Sprinkle chopped fresh basil over the chicken and set aside. Also, make a slurry with the cornstarch and cold water and set aside as well.

Combine the milk and cream in a heavy-bottom pot. Add enough chicken base to get a golden color and good chicken flavor. While stirring often, cook over medium-high heat to just before boiling. Slowly add the slurry while constantly whisking until thickened. Remove from heat immediately.

Pour the thickened cream sauce over the chicken, cover with plastic film and foil, and keep hot in the steam table. Also cook the green peas al dente and keep them hot separately. Cook egg noodles (aka “butter noodles”) to 80%, drain, rinse with cold water, and keep cold.

To Serve: Rejuvenate noodles in pasta pot. Place scoop of hot mashed potatoes at one end of an oval plate, off-center. Ladle heated chicken gravy over potatoes. Put egg noodles on plate diagonally, and ladle the chicken mixture over the noodles. Serve with green peas on end of the plate next to the mashed potatoes.