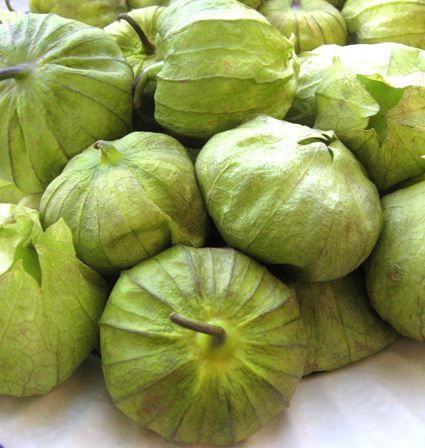 In the past few days I’ve posted more than once about Chef Mario Batali’s babysitter’s Chicken with Green Sauce, how easy it is to make, how wonderful it tastes, and yesterday, how versatile it can be. But I have a confession to make. There’s a reason the sauce never looked quite green enough in the photos I’ve posted: The tomatillos Briahna and I had picked up were probably on their last legs. Kinda yellowish, actually, and more wrinkles than a California raisin. To be sure, tomatillos aren’t grown too many places here in Michigan. The ones we get up here … well, we’re lucky to get fresh ones, if we can get them at all. Mary had never heard of tomatillos until this past Saturday, and as I’ve found out, neither had a lot of folks. I’d seen them and had been curious, but had never done anything with them until Saturday.

So imagine my pleasant surprise this morning, while I was at the Kroger down in Point Place, Ohio, when I found the produce guy with a new box of tomatillos. Where he’d gotten them, I have no clue. The box was labeled “Old El Paso Chili Peppers”, so that didn’t help. But as you can see, the husks aren’t too brown, and inside, the tomatillo fruits are a wonderful shade of green. 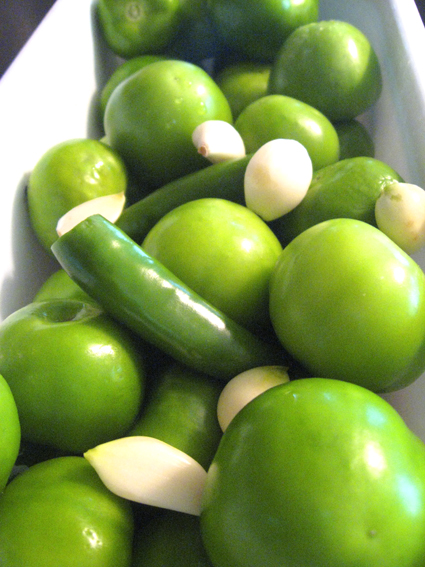 These tomatillos sure look like apples, don’t they? They’re almost the same shade of green as the serrano chiles the recipe also calls for. A few of the tomatillos had some shallow wrinkles, but until you husk them, there’s no way of knowing this. Three pounds of tomatillos, with only a few being slightly wrinkled … yeah, I’d call that good.

If you haven’t handled tomatillos before, when you husk them you’ll find the outside of those not yet fully ripened a bit on the sticky side. That’s alright, don’t worry about it. Just give them a quick rinse to get any dirt off. 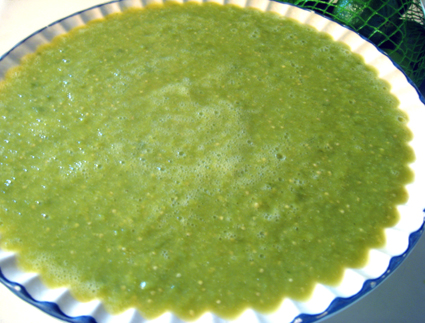 All this sauce needed was a quick fly-through with a Fritos Scoop, which happened to be on its way to my mouth.

A few thoughts on this recipe:

All these reasons were good enough to drive me to make more of this stuff. Dorothy, Ms. Squires … if you want some, come and get it! But of course, bring your own jars …