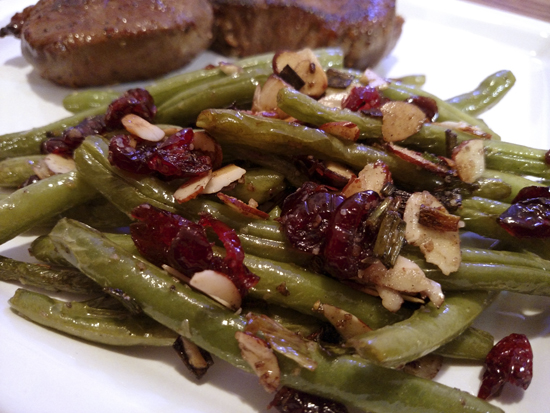 This is one of our go-to side dishes that seems to go with just about everything. It’s particularly good with meats, and game meats seem to suggest it. At that point it also goes very well with the wild rices and other grains that are generally served with game.

This recipe, however, gained some traction a couple weeks ago. On November 12th Flint Journal Entertainment Reporter Scott Atkinson posted that he was looking for a green bean recipe to include with the MLive Group’s statewide set of Thanksgiving recipes for the year. I submitted this recipe even though I’d never written it down … I was in such a hurry I ended up submitting it as follows:

There was some discussion in the comments from other submitters that this wasn’t a green bean casserole. But Scott had never specified that’s what it had to be. By that Friday Scott had selected this recipe and asked me for a more complete version. I threw some guesstimates for measurements into a Word version, fleshed out the procedure a bit more, and sent it off.

The first warm surprise came in the form of the rest of the complete menu from across the state:

I was certainly in excellent company here with these folks, some of them rather heavy-hitters. But MLive also included this description in the listing of included recipes:

We know how attached people are to the green bean casserole, and Flint is no exception. But taking the main ingredient out of the casserole and mixing it with less traditional pairings — like almonds and cranberries — added up to a side that could end up being the star of the show.

When Scott finally posted the official version of the recipe there were 19 photos, along with a video of the completed dish. He described the completed dish with the sentence “I expected this recipe to be good, but I didn’t expect it to be as good as it was.” That kind of thing is always great to hear, or see.

This recipe works year round, as long as you can get the fresh green beans. If you feel you have to use frozen or canned beans, please … don’t bother.

Rinse the green beans and break off the ends. Rinse and trim the green onions (leave the white bulb end for flavor) and chop to 1/4 ” length. Mince the garlic and set aside.

Note: Different amounts and other ingredients give different flavor profiles. For example, try using chopped sweet Vidalia onion instead of chopped green onion, use toasted slivered almonds, try golden raisins instead of or with the dried cranberries, replace half the grean beans with 2″ lengths of grilled asparagus, etc. This is one of those recipes where measurements could be a handful of this and a pinch of that.