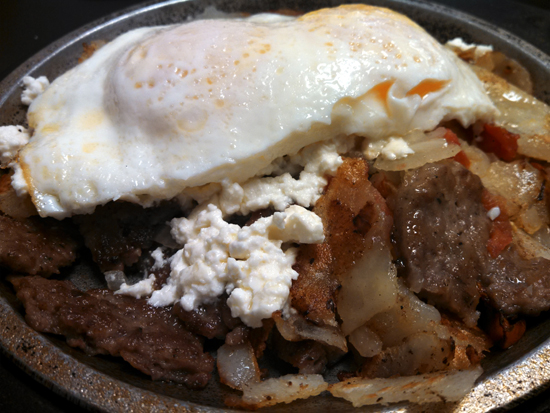 Unless you live in a place like Michigan, the area north of Fort Wayne, Indiana, or northwest Ohio, you may not understand what a Coney Island restaurant is. Coney Island restaurants number in the hundreds, possibly even the low thousands, in these particular areas and in smaller numbers in some other regions across the United States.

The story goes that immigrants from the Mediterranean region first happened upon the Coney Island area off Brooklyn, New York. The Greeks started emigrating from Greece in about 1890 not only because of the promise of making good money here, but also because of the Ottoman rule there. The term “Coney Island” isn’t a Greek or Macedonian term whatsoever. The name of the Coney Island area off Brooklyn in New York is derived from the name Conyne Eylandt,, translated as “rabbit island”, the Dutch name for that area as found on a map by Johannes Vingboon in 1639. Maps as early as 1733 used the name Coney Island after the term had been used verbally for quite some time.

Those immigrants likely visited Coney Island, eating at Feltman’s. Charles Feltman had immigrated from Germany and started as a pie wagon pusher. It was about 1867 when he put a franfurter on a roll so his diners didn’t need silverware, inadvertantly creating the popular sandwich we know today. He opened his first stand on Coney Island in 1871, and stories indicate he may have sold over 3,600 of these sandwiches in his first year in business. Business ended up being so good, Feltman expanded his Coney Island locations to include a hotel, restaurants, amusements and other concessions. He passed away in 1910, but Feltman’s stayed upen until 1952. It was one of Feltman’s own employees, Nathan Handwerker, who opened a nearby stand in 1916, undercutting Feltman’s 10-cent sandwich by offering a 5-center and founding the hugely-popular Nathan’s Famous. 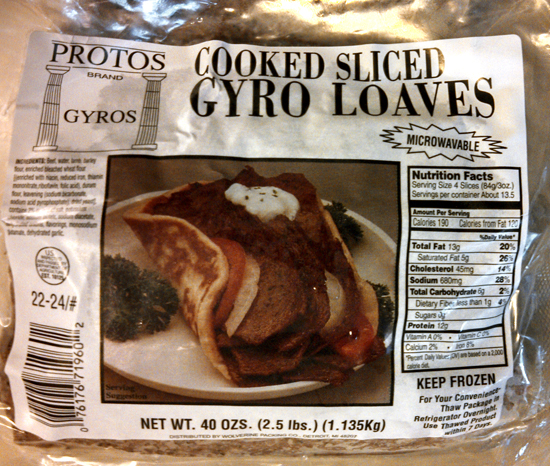 Some of the better commercial beef and lamb Gryro meat that’s available in southeastern Michigan. Made by Wolverine Packing in Detroit, this brand is what most Greek/Macedonian/Albanian and Coney Island restaurants in the area use if they’re not making their own.

The term “Coney Island Restaurant” has a bit of a baffling history. No one seems to really know why Greeks, Macedonians or Albanians headed for Michigan would name their restaurants after a Dutch term while offering a German sandwich as their lead menu item. My own thinking is that, as the term “hot dog” wasn’t coined until 1916, it’s quite possibly they refered to Feltman’s sandwich as a “coney island” in reference to where they had it. Frankfurters were developed in Frankfurt, in upstate New York places offer a Michigan Dog patterned after the coney from Todoroff’s in Jackson, Michigan, Parmesan cheese comes from Parma, Italy, Roquefort cheese has to be aged in the caverns under Roquefort, France … It stands to reason immigrants were telling each other they wanted to go to Feltman’s to eat some Coney Islands. It’s not that the restaurants are named after Coney Island itself. Instead, when these immigrants started their restaurants, it was a restaurant where they could offer their own Coney Islands similar to Feltman’s frankfurter on a roll, making their business a Coney Island restaurant.

In developing their restaurant menus, the Greeks, Macedonians and Albanians followed the concepts of a lot of diners and cafés in the areas they settled into, to include large breakfasts, hamburgers, beef, chicken, pasta, local fish, desserts featuring foods from local harvests … but then also added specialties from their own cultures. A compiled version of a “standardized” menu for a Coney Island Restaurant looks like this:

My family first took notice of the Greek-owned restaurants in Michigan in the late 1970s. It became a kind of game, searching out these wonderful family diners with their massive portions of good honest food, the kind of food truckers would also seek out on a regular basis. We became friends with many of these owners in the Flint area and frequented their establishments on our normal Friday evening shopping trips.

I remember a Greek-owned restaurant on the King’s Highway just west of Toronto. We were staying at the Candy Haven Tourist Home in 1982 and ate at that restaurant across the street each morning. And each morning, the owner & cook would come out himself to take our order. There were six of us traveling that trip, but the man never wrote our orders down, nor did he write down orders he took almost at the same time from other guests. He cooked them up, along with anything anyone else had ordered, remembered everything perfectly, and knew afterward which plate went to which customer.

I have my own story about working working with an excellent Greek cook. Except for cooking at home, and at a YMCA camp in the summer of 1979, I didn’t enter an actual restaurant kitchen until April of 1983. Frisch’s Big Boy on the western edge of Columbus just west of the freeway somehow decided I was the right person to open their first breakfast bar and operate it five days each week. Manager Gus Pappas was the first cook I knew who taught me real skills. A tall, skinny Vincent Price-looking Greek at least 50 years old, he taught me to steam whole eggs instead of hard-boiling them to make them easy to peel. He was the first to show me halfway-decent knifing skills, how to prep a whole pineapple to make it a snackable food, and how to really taste a dish, and then make adjustments to it.

We tested everything for longevity in a steam table on wheels. Grits didn’t hold out too well, nor did pancakes, nor did the fruit pie filling we set out as toppings. Of course, scrambled eggs, sausages, freshly-grilled shredded potatoes, and other decent things survived the hours on that table over the steam bins.

When Gus was forced out of the management of that Big Boy in late 1984 in favor of young MBA types, the real skills in that kitchen also went away. The Greek way is about a passion for real food, the way Gus taught us at Frisch’s, combined with a serious appreciation for how that food makes the diner feel. That’s what makes customers happy in foodservice, and being able to do that is very satisfying indeed. It’s what really drove Gus, and why he made us work the way he did. At the end of the day, you knew in your heart you’d done nice work. 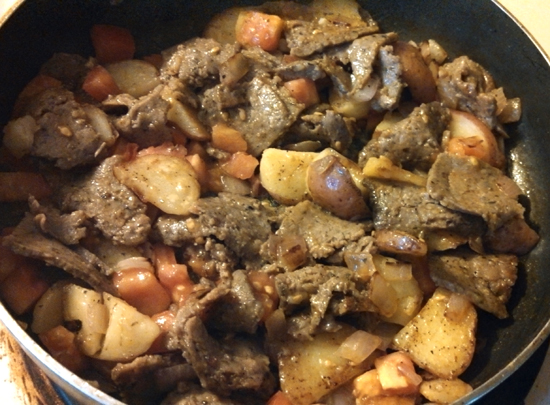 The filling for the Greek Breakfast Skillet, just before plating, and topping with two over-easy eggs.

Having always been interested in what Greeks and other Mediterraneans offer in their restaurants, particularly in Coney Island restaurants, I’ve recently become even more interested in re-creating some of their dishes. Outside the work I’ve done in creating and re-creating different versions of the Flint-style Coney Island sauce, this is really the first dish I’ve focused on re-creating to be as close as possible to what I’ve enjoyed in a restaurant. In this case, it’s the Greek Breakfast Skillet I had at the Cozy Corner Coney Island in Monroe, Michigan, in August 2013. The old man in the kitchen, also the owner, is from Greece and is also a former resident of the Greektown area in downtown Detroit. He always seems extremely proud of his work, and it’s definitely justifiable.

I’d hoped to find a suitable Gyro meat to use in the dish, and when I found the package pictured above and mentioned what I was doing to the girl at the foodservice supply store in Monroe, it became obvious it’s exactly what they use at Cozy Corner. Later, one taste of the Gyro meat slices from that package confirmed it.

One of the things that I realized about this dish is how easy it would be to prep for a large number of servings. The onions and potatoes need to be prepped ahead of time and sautéed. These can then be held at a low temperature until the skillet is ordered. At that point combine the tomatoes with the Gyro meat, toss it into the skillet or on a flattop, heat it through while cooking the eggs, put the filling in the plate or serving skillet, top with the crumbled feta and the eggs … Just a couple minutes from ordering to serving. Absolutely simple, filling, quite tasty, and very satisfying. 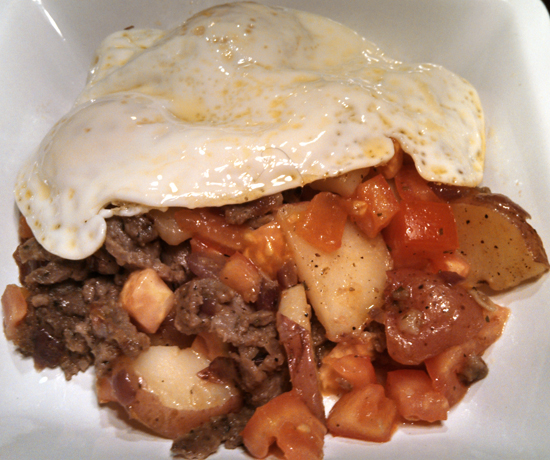 The completed re-creation of the Greek Breakfast Skillet. Dang it, forgot the feta …

Boil the potatoes whole for just a few minutes until they’re almost fork-tender but not quite. Remove the potatoes from the heat and let them cool. Meanwhile, chop the tomatoes and slice the onion, cut the Gyro meat slices into thirds and set them all aside separately.

When the potatoes are cool enough to handle, cut them in half and then slice them into 1/8″ slices.

Heat a couple tablespoons olive oil in a high-wall skillet over medium heat. Add the chopped onion and potato slices, seasoning with a little salt and pepper. Sauté until the potatoes are starting to brown, adding a touch more olive oil if necessary. When the potatoes are starting to brown, add the Gyro meat and chopped tomatoes, and continue to sauté.

Heat an egg pan with a tablespoon of olive oil. Crack two of the eggs into it and cook until over-easy. Divide the completed filling into two serving dishes, and top one with some of the feta cheese and the over-easy eggs. Wipe the egg pan and cook the other two eggs, along with any toast for the dishes. Top the second dish with its own feta cheese and the second batch of eggs.