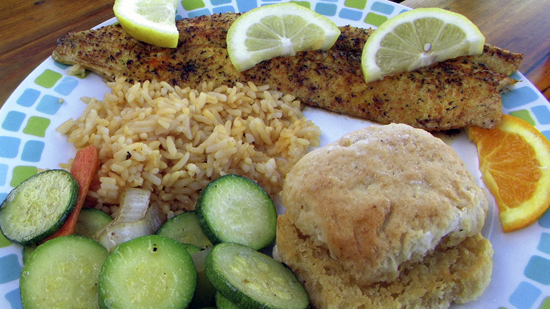 There are many places in the Great Lakes region where Whitefish is listed in the menus of restaurants as being “fresh” as well as being labeled with, “caught locally”. The Straits of Mackinac, located between Michigan’s upper and lower peninsulas where Lake Michigan and Lake Huron meet, is one of those places where this designation for fish can be quite valid. This evening I was able to enjoy some broiled Whitefish that had likely been swimming this morning. 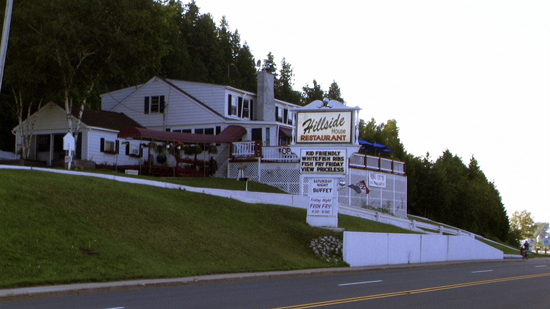 Prior to last year’s Michigan Association of Mayors workshop and conference, Mary and I enjoyed a lunch at Snug Harbor overlooking Lake Michigan in Grand Haven. This evening here in St. Ignace, Michigan, the day before this year’s Mayoral event gets underway, we had dinner at the Hillside House Restaurant overlooking the eastern tip of Lake Huron at the Straits of Mackinac and Mackinac Island itself. While Mackinac Island doesn’t show in any of these photos (we’ll visit the island tomorrow morning), it was right there a couple miles away along the horizon. 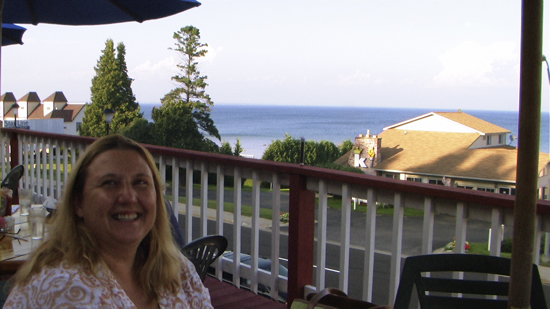 Hillside House Restaurant is an old home that was converted to its present business some time ago. There are remnants of a motel next to the property along the same level as the restaurant. I can imagine the motel may have been owned by some of the owners of the house, and may have been quite popular in its time 30 or 40 years ago.

Update, August 4 – In an email overnight, co-owner Judy Childs provided more information on the history of the house: “The house was built in 1950. It was purchased by the Belisle’s in 1952. At that point it was an office for the motel next door as well as the Belisle’s home. In 1963 the house was converted into a restaurant. It has faithfully been serving customers every year since then except one year, 2000. It was purchased by the present owners in 2001, Jeff and Judy Childs.”

The garage of the house has been converted into a commercial kitchen. The dining and living room areas have been opened up, and the old hardwood floors are intact around a central fireplace. Out front, a wide deck is across the front of the old living room. Thick, hardwood hexoganal picnic-style tables with umbrellas populate this deck for the gorgeous overlook.

Once we were seated and had our salads served, our server Janet was talking to us about how warm it was. It is quite sticky up here, which is fairly unusual for a location in Michigan above the 45th parallel. But after a while a good breeze came across the Straits and the humidity settled down.

I ordered the Whitefish dinner seen in the first photo. The filet was nicely season with few herbs and spiced, and had been beautifully broiled with skin intact on the underside. The zuchini and onions had been sautéed on the grill and had wonderful flavor and a good “bite” to them. The seasoned rice was an excellent side, as was the biscuit. 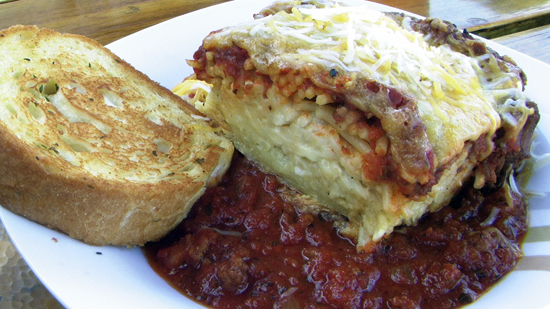 Mary had a serving of the Spaghetti Pie. This casserole-style dish was quite firm, had an excellent flavor and was cooked as spaghetti should be. So many places get this wrong, with spaghett so wet it falls apart or so dry you have to use a knife to cut through the crispiness. This was neither of those, and was very nicely done. The herbed garlic bread was a nice compliment to the flavor of the sauce as well.

Of course, we had to have a good Michigan dessert, particularly since it’s strawberry season. 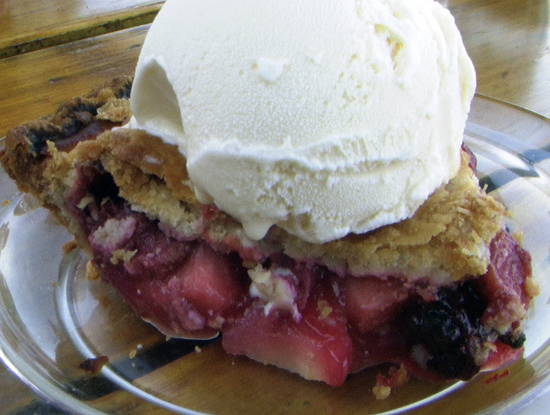 Mary had a serving of the Strawberry Shortcake, something she really likes. I decided on a triple-berry pie, with strawberries, raspberries and blackberries. This homemade pie, warmed, with it’s tender and flaky crust, all topped with a big scoop of vanilla ice cream, really hit the spot after a long day of traveling.