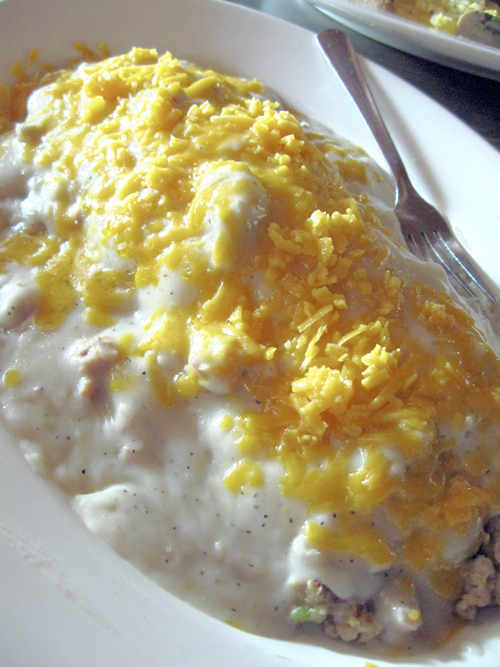 An excellent breakfast at a bar? Who’d of thunk it?

Yeah, that’s a big pile of schmutz. But it’s a good pile of schmutz. Out of all the breakfast burritos I’ve eaten in probably 40 years, this one is one of the best if not the best one of the bunch. This thing is absolutely huge. I’d hoped to get a photo of what the inside of this burrito looks like, maybe with a good cross-section, but it just wasn’t meant to be.

One of the more interesting points about this burrito is where its served. If you live in Monroe County and/or drive the infamous Telegraph Rd. in Michigan near the Ohio state line, you’ll likely have driven through the intersection at Sterns Rd. about two miles north of Ohio. You’ve probably looked at the little bar on the northwest corner, Rivalrys, and because it doesn’t look like much whatsoever you’ve always driven right past it. 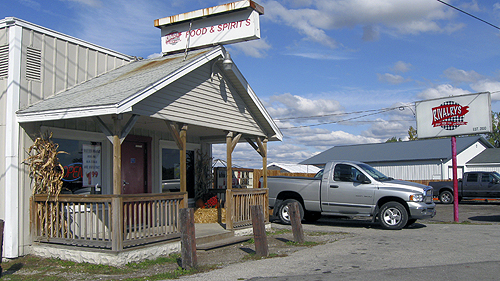 Late yesterday morning we were actually on our way to breakfast at another restaurant when I spotted Rivalrys once again. My curiosity got the best of me, I made a hard right turn and parked at the far end of the little building.

Inside, the place is a classic bar. There’s country music in the jukebox, a karaoke machine by the front door, a tin ceiling, Club Keno on a couple flat-screen monitors, burly bearded bartenders schlepping drinks … and yes, vodka-based Clamdiggers being served at 11 a.m.

As soon as the bartender had gotten us our coffees and we opened the menu, we spotted it: The Belly Bustin Burrito: 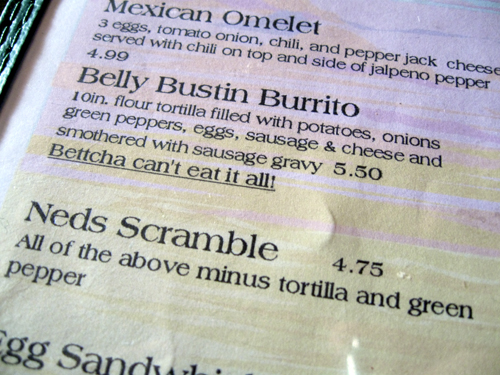 Mary said that, if I didn’t order the thing that she was going to because one of us had to have the experience. I went ahead and order the Burrito while she ordered the Farmer’s Omelet.

Like I said, this was likely the best breakfast burrito I’ve ever had in my life. It may not be the largest. That would have been one I tried to eat at Tony’s in Birch Run, Michigan, where they don’t measure their portions. (They just serve the package they get!) One problem with a lot of breakfast burritos is that the fillings are either too dry or they’re a bit on the runny side. The filling of the Belly Bustin Burrito was neither, with thick chunks of sausage and good potatoes in with the eggs. The sausage had an excellent flavor, while at the same time it didn’t overpower the rest of the dish. There was also a good southern-style sausage gravy on it, one that’s not too peppery. What was interesting about this dish was that I didn’t have to use salt or pepper. This burrito came perfectly seasoned, an accomplishment that was impressive on its own.

I did finish this beast. It was about noon and I hadn’t eaten since an early dinner the night before. After eating the Belly Bustin Burrito I also really didn’t eat much the rest of the day either (no surprise there), and only had some cottage cheese and Georgia peaches for dinner. 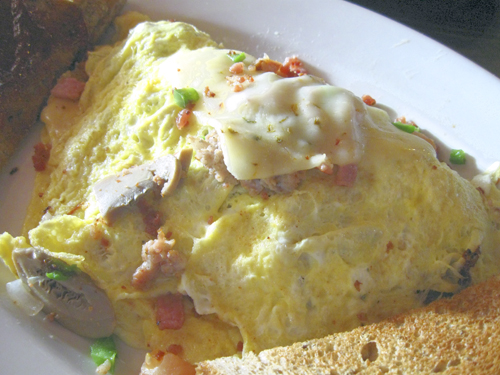 This was also overstuffed with all kinds of good things, potatoes, sausage, cheese, mushrooms and peppers. There wasn’t a brown spot on it as it was obviously carefully made. The lighting in this pic, the sun coming through the front window of the dimly-lit bar, really doesn’t do this omelet justice.

Notice the prices in the menu. The burrito itself was $5.50. Other places would probably charge over seven or eight dollars for that same burrito, or even something smaller. I think her Farmer’s Omelet, as big as it was, was $4.99 like the Mexican Omelet was as shown in the menu photo, but don’t quote me on that.

If you like a really good breakfast, and can tolerate a classic, smoky bar atmosphere (it is what it is), Rivalrys is one of those places you should stop into instead of just driving past. We’re glad we did, and will definitely be going back.