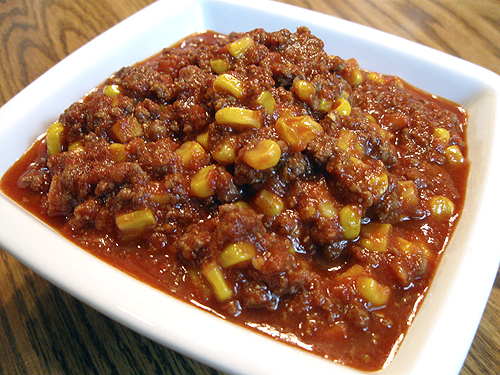 I love cooking with deer venison. But oddly enough, no one in my entire life of what is now a couple years shy of 50 years has ever invited me hunting with them. I’ve fired seven whole rounds of ammunition, five of which were 9mm rounds all fired within 30 seconds in Navy boot camp. I’ve fished more times than I can recall and actually caught a decent-sized Pike once. But hunting? Never been there, never done that.

Knowing hunters has been a God-send though. They always seem to have more deer venison than they know what to do with. Invariably throughout the year, a few of them will send Mary and I away from a visit with pounds of the stuff. It’s simply a matter then of what to do with it.

This past Sunday Mary’s three brothers had us over to honor her birthday. At the end of the visit, those three hunters started talking about the deer venison in the freezer.

You may be wondering why I keep specifying “deer venison”. The meat of any game or hunted mammal, deer, elk, moose, boar, caribou, even certain hare, are considered venison. You yourself may have developed the habit of calling any deer meat nothing more than “venison”, but you’re actually not being specific enough.

By the end of the visit we left with a couple pounds of ground deer venison, some steaks from the same animal, and some sausages one of the guys had had made. This morning I got out the ground portions so the meat would thaw for a chili.

Here’s the thing: Deer love corn. So instead of beans I used canned corn in this batch but it would certainly be even better with fresh corn. I’m sure the corn would also be good with a chopped onion and maybe some peppers that might be sautéed in a skillet prior to mixing with the chili. But I just wanted the chili so that didn’t happen … Also, make sure to use the Spanish paprika instead of the sweeter Hungarian version. You want to compliment the chili with the other spice instead of letting the two fight. Oh, and garlic powder? Never!

Heat a few tablesoons of the olive oil in a 6-quart pot over medium heat. When it’s hot enough, add the deer venison and some of the garlic, salt and pepper. Brown the meat gently while stirring often so it doesn’t scorch. When the meat is browned, drain it fully.