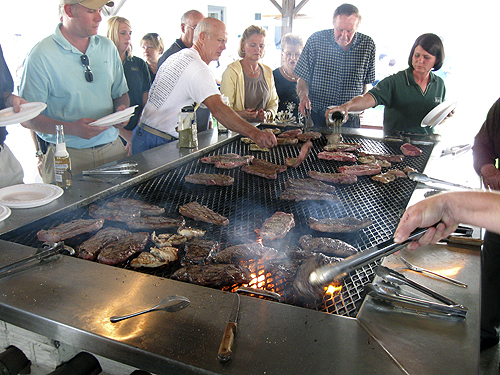 The community grill in the back yard of the venerable Monroe Boat Club.

When I lived in Norfolk in the early 1990s there was a man who drove himself to our church in a limousine. He was thin, impeccably dressed, and had the trimmed gray beard and black 10-gallon hat of an old-west Sheriff in his Sunday best. He owned and operated a small chain of steakhouses with what I called a “community grill”. If you were so inclined you would order your meal, then go to the “grill room”. The grill was probably 20 feet in length and 6 feet wide. You would choose your steak and foil-wrapped potato from a glass-front refrigerator and cook the food yourself. While this was an option (you could order your meals fully-cooked by the kitchen staff if you’d like) it made for a great sense of cameraderie when dining with a group.

The man himself was very unpretentious, and was an usher and greeter at that church. The restaurants no longer appear to exist but I’m sure that has nothing to do with a lack of personability on his part. It may have been partly because he was too friendly. Just because we went to church with him, he never once allowed me to pay for a meal. Maybe he simply had too many friends.

This “community grill” at the Monroe Boat Club brought this man’s restaurants back to mind. It’s the cameraderie that matters. 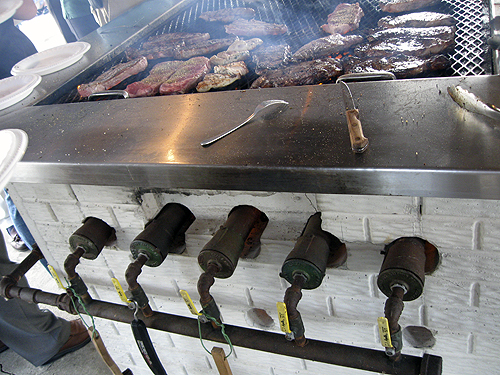 The gas valves on the side of the community grill.

This particular grill appears to be an older grill, possibly charcoal, that’s been fitted for gas. It’s fairly large and has a wide stainless tool surface around the edge. What’s most important however is the politeness of the people using the grill for a given meal. This, the Monroe Boat Club members have in spades. 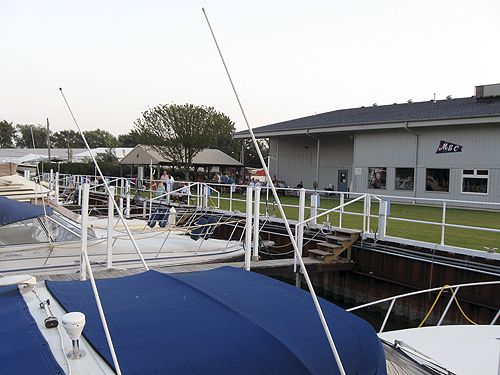 The setting for this massive community grill is under a pavilion behind the club. Boats, some 40′ long, are moored in the channels allowing the members water access to Lake Erie and beyond. Wear shoes in that yard folks, as the club’s roof has been redone and there still might be loose nails and staples in the yard …

The occasion for the evening was a fundraiser for accessible play and recreation areas in the County and City of Monroe. We had been invited to this event by one of its supporters, city engineering firm Dietrich, Bailey & Associates. There were probably a couple hundred people there in support of the cause, the four 50/50 raffles and the silent auction. 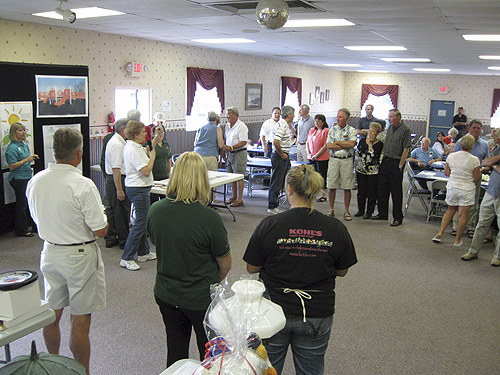 Of course the reason I’m covering this event here is … well, the food. Selections for the entrée were steak, chicken or vegetarian lasagna. Of course I had ordered the steak and Mary ordered the chicken. When I went to the pass-through window at the kitchen I was handed this beautiful inch-thick ribeye. Mary picked up her chicken, which was three pieces of breast meat. Mike Bailey, President of DB&A, also had a ribeye steak. As the firm is also Luna Pier’s City Engineers, I grilled the meat for the three of us (seasoning the steaks with GFS’ own Canadian Steak Seasoning) while Mike and Mary chatted about city business. 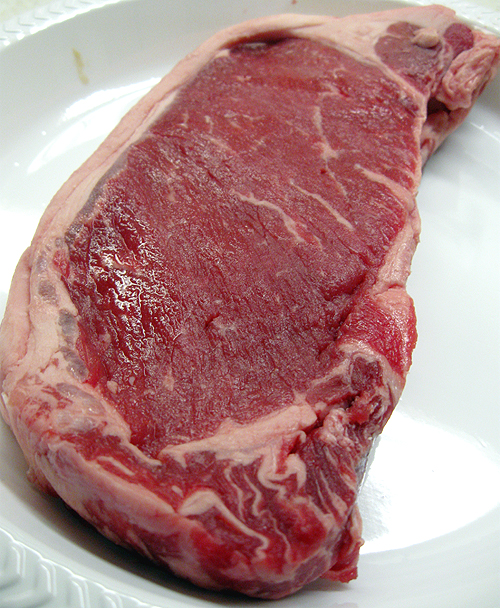 My raw ribeye steak in the club’s kitchen’s pass-through window.

As the hotter end of the grill was fairly packed I was able to wander around and take some photos while Mary and Mike talked. The location is beautiful, on a peninsula off the western basin of Lake Erie in the Bolles Harbor area. There are four grrod restaurants on this peninsula: The club itself, Bolles Harbor Café, the new Harbor Inn & Ale, and an Oliver’s Pizza franchise in a convenience/fishing/convenience store/marina. 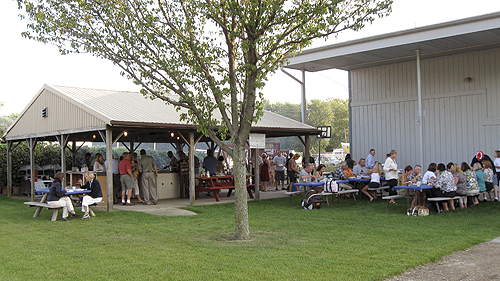 Mary and Mike are the two in the far left end of the pavilion.

Once the hotter end of the grill was partially cleared, I moved Mike’s and my own steak down there while leaving Mary’s thinner cuts of chicken in the middle of the grill. It didn’t take too long then to finish cooking off the steaks to the desired medium-well. (I could have gotten them meadium-rare if I’d have gotten on the hotter end of the grill earlier.) When the meats were done, we went back inside to finish plating the meals with baked potatoes and rolls. 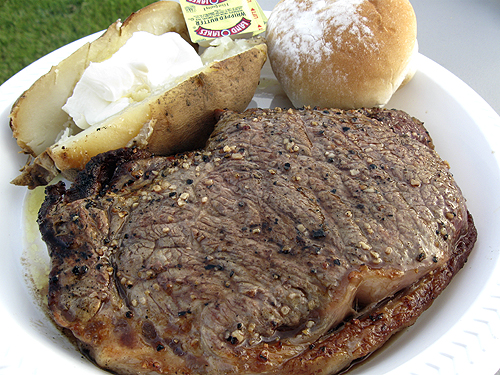 We had a Hell of a nice evening with a lot of great people. We ended up winning a door price, $25 toward one of three restaurants in downtown Monroe. Mary also bought a micropeel at the silent auction. I don’t much about those things but Mary wants the spa to do the micropeel on my back.

I just want one of those grills. Maybe they’ll auction one off next time. I’ll start the bidding at $30.