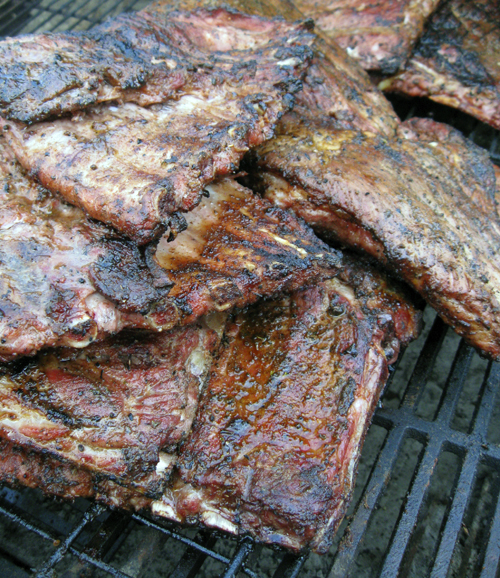 What it’s all about; Ribs

It took me quite a while to learn how to cook ribs at home so they turn out halfway decently. What I do is pretty simple: The spare ribs get wiped down, sprinkled with a mix of Kosher salt, pepper and granulated garlic, then slow-cooked in a 200F oven for anywhere from 4 – 6 hours depending on their thickness. The pans are then drained, the ribs slathered with sauce, and grilled outside over medium-high heat for about 45 minutes, with flipping and reslathering about every 10 minutes. They then cut well into servings, fall off the bone, and are tender while still having a good “bite” to the meat.

I’d never imagined I’d be invited to be a judge at a rib-off. But a few months ago, that actually happened. It kinda threw me, particularly since the Memphis BBQ Network-sanctioned competition feeds into the massive Memphis in May competition. 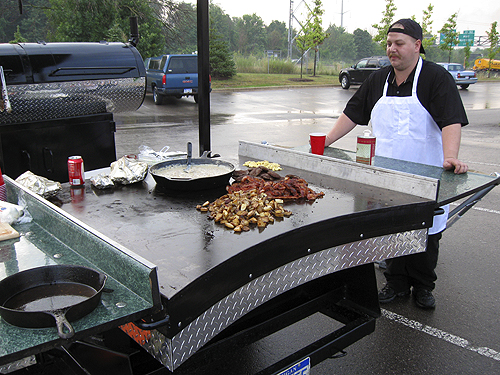 One of the aspects they don’t show on documentaries of these competitions is what and how the competitors eat for other meals. You might imagine they send a team member off to the nearest fast food joint for a sack of something, which probably does happen to some extent. But this team (who, from what I understand, have something to do with a scrapyard) cooked their competition-morning breakfast on a massive trailer-based griddle made from a thick steel plate and powered by LP gas. 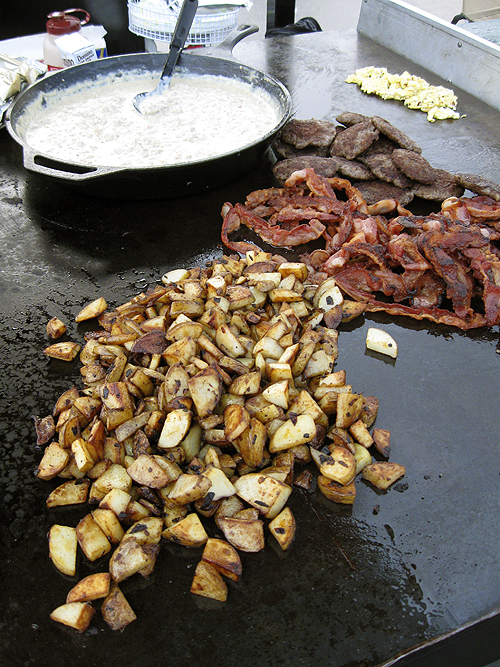 Something to remember here is that gas of any kind is not allowed for use in the competition itself. Smoking, slow-roasting, grilling, whatever … it must be done over wood or charcoal. The wood or charcoal may be lit via gas, but that’s all that’s allowed. So this amazing gas griddle, covered with potato wedges, bacon, sausage, eggs and an 18-inch skillet filled with sausage gravy, wasn’t used for the competition. It was just along for the ride.

As to the equipment used by the teams for the actual competition, the gear-of-choice ran the gamut from some rather high-end gadgets to some of the most basic backyard stuff. At the higher end was this beast, looking like one of the computerized environmental test chambers used in automotive R&D. 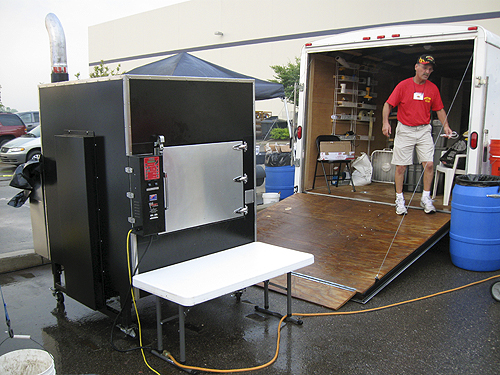 A Fast Eddy’s by Cookshack Series 300 competition smoker being used by one of the teams in Novi.

If I were to ever any competition of this type, I might end up with something like this: 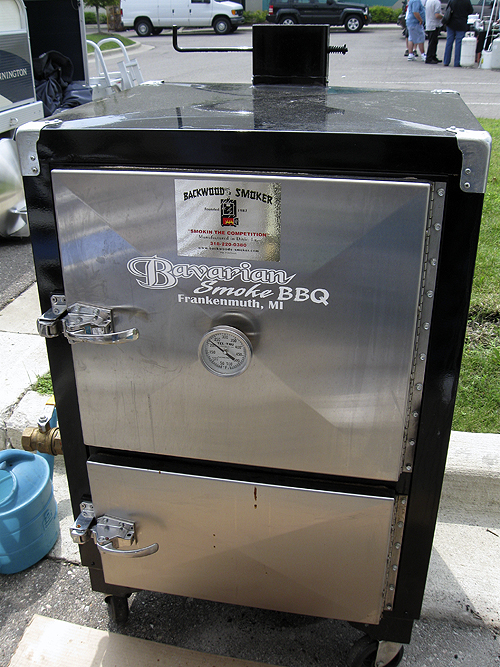 “The Party” smoker from Backwoods Smoker

With its $1330 base price tag, “The Party” from Backwoods Smoker seems just the right size for a competition like this one. I may be a certifiable geek, I may have friends at Microsoft, and I may even program industrial applications for a living. But I definitely don’t need a computer to run my smoker. When it comes to ribs and such, I like getting in there and actually doing the cooking myself. This smaller smoker, protected from the elements with a solid mechanical temperature guage on the front is something I could live with. 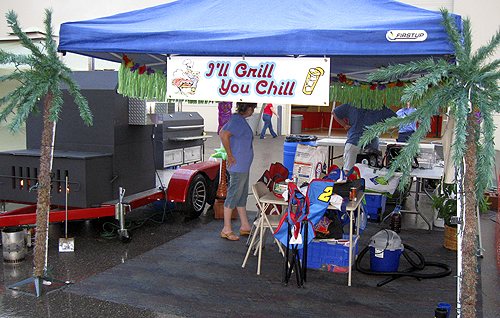 If you’ve seen the documentaries on Memphis-style barbecue competitions, you’ll know there are two kinds of judging. As new judges, Mary and I could participate in the blind judging. Once finalists are selected, they’re subjected to on-site judging by more experienced judges. In this judging, competitors have to put on a “dog-n-pony show”. The judges arrive at the team’s site expecting a polished welcome, a clean cooking area, possibly a maitre’d, maybe even a story which may or may not be true. Some competitors, such as the one above, set up their area in expectation of being a finalist, and were ready for just about anything. 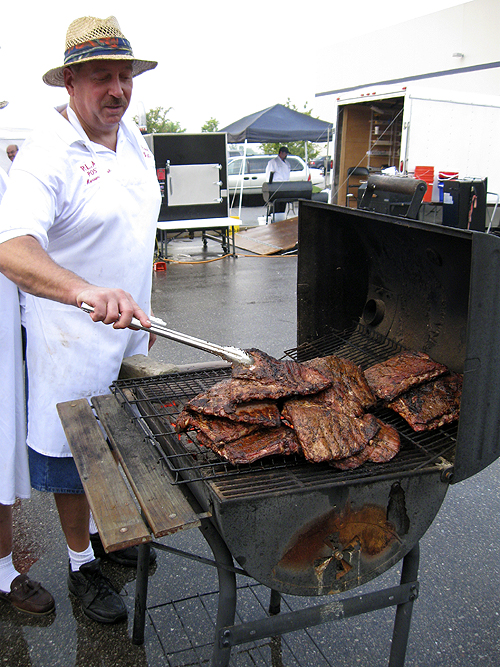 At the extreme other end of the gear are the guys who could do this stuff each and every day using the same equipment in their backyard. The first photo in this post, the photo which made your mouth water and caused you to read this lengthy post already, is simply a close-up of this pile of ribs on this cooker. And you thought you needed something expensive to create ribs good enough for competition … 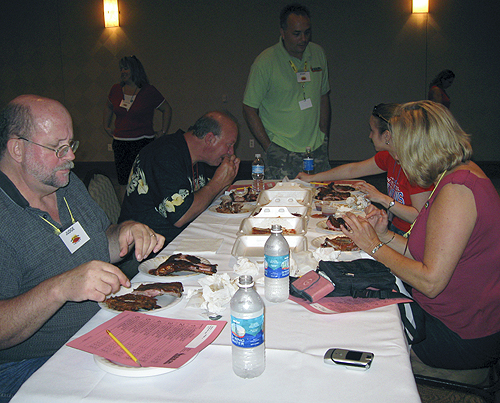 The blind judging, with yours truly on the far left. The judging was blind but the judges weren’t.

In the blind judging portion of the cometition, teams bring their ribs to a collection area in containers given to them for that purpose. The ribs are checked for garnishes, which are removed, and any custom markings that will cause identification of the entry. All that can be in the container are ribs and sauce. These are then brought to the judging tables, and all are opened simultaneously. We judged on appearance first, then grabbed ribs to judge further on tenderness, flavor and overall impression.

One thing to note: If you’re ever judging one of these competitions, do yourself a favor and don’t eat breakfast. 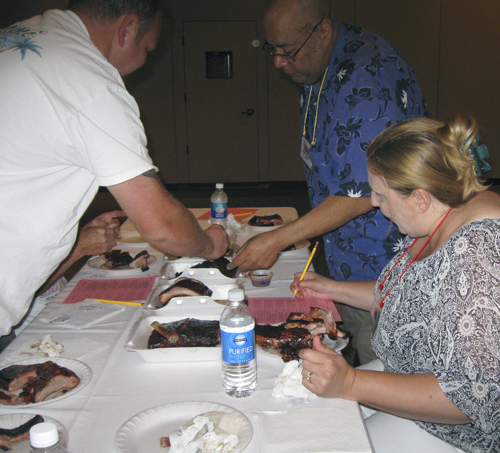 Mary, on the far right, joined us at training in the morning to become a competition judge herself.

One aspect of this judging Mary and I really liked was that it’s what’s known as “comparitive judging”. Judges are told not to compare endtries to their grandfather’s ribs, their own ribs, their favorite ribs, or ribs they’ve tasted at other competitions. The entries are  to be judged only against other entries at the table. While this is difficult to do at first, it really makes a lot of sense.

I’ll finish this post with a look at the ribs from the Bavarian Smoke BBQ from Frankenmuth, Michigan, who used that nice “Party” Backwoods Smoker to prepare these ribs. Don’t these look good? 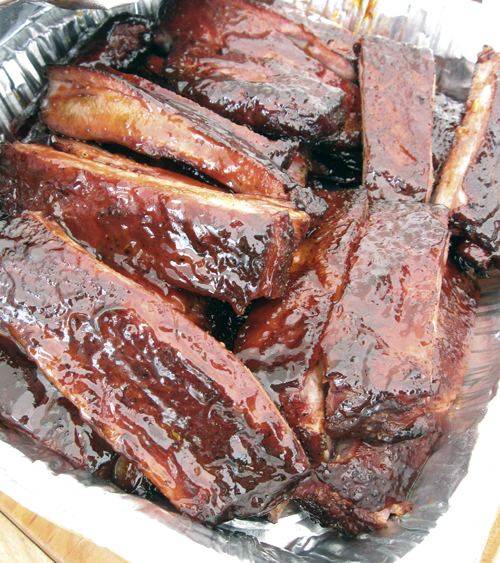 1st: Pork of the North