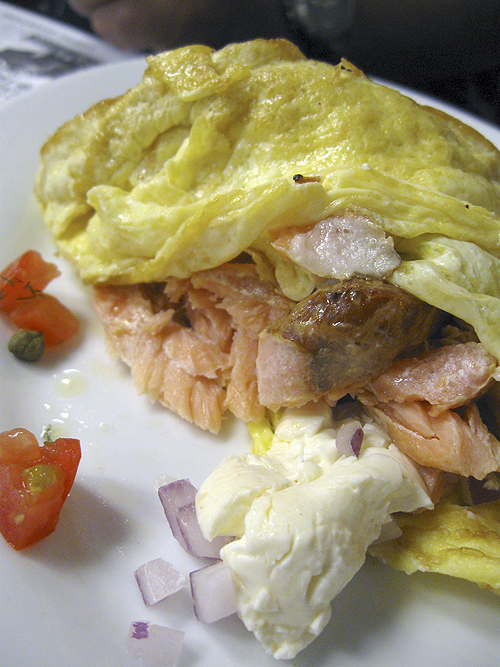 I didn’t eat this omelet. Neither did Mary. Oddly enough, some biker we met at a rest area ate this particular Smoked Salmon Omelet.

Already, you’re definitely getting the wrong image of the guy. Believe you me, we had an entirely different image of him at first, which was also quite wrong.

Lemme tell you this story …

Traveling along I-96 last Wednesday we pulled into the rest area just west of Lansing near Portland, Michigan. We pulled in next to a Harley with a lovely young lady standing next to it. We were guessing she was in her early 20s. In the rest room I spotted the other rider … a man obviously in his 40s. My first thought was, “Wow he’s way too old for her.” As Mary and I were walking back to the van she was thinking exactly the same thing. That was, until the guy turned to us and innocently asked, “Would you take a picture of my daughter and I?”

It turned out Alexandra is only 14 but, like my own Briahna, easily looks older then that. She and her dad John are from Windsor, Ontario, and had rented the Harley from a shop in Farmington Hills. I would learn later her dad had promised her this trip on her 12th birthday so, as she put it later, “I had to wait two years for this!”

Or so we’d thought.

You know how, every once in a while, some really odd coincidence will happen, and the world will suddenly seem very small? That happened to us the following morning when we were leaving the hotel and Mary said, “Hey, isn’t that … ???” There they were, John and Alexandra, leaving the hotel in front of us! We don’t recall telling them exactly where we were staying, so the odds of us showing up at the same hotel some 80 or so miles from where they were headed are somewhat astronomical. 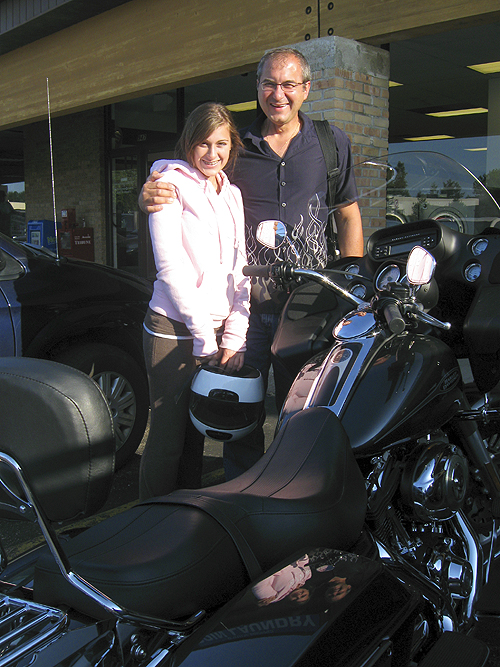 John and Alexandra in front of Jeanne’s Café with their Harley.

As I’d mentioned in yesterday’s post I was already planning on dropping Mary off for her morning sessions and heading for Jeanne’s Café so I told John about the 25 omelets there. When I got to the restaurant, John waved me over to their table. We had a most enjoyable visit, while at the same time enjoying some of Jeanne’s wonderful omelets. 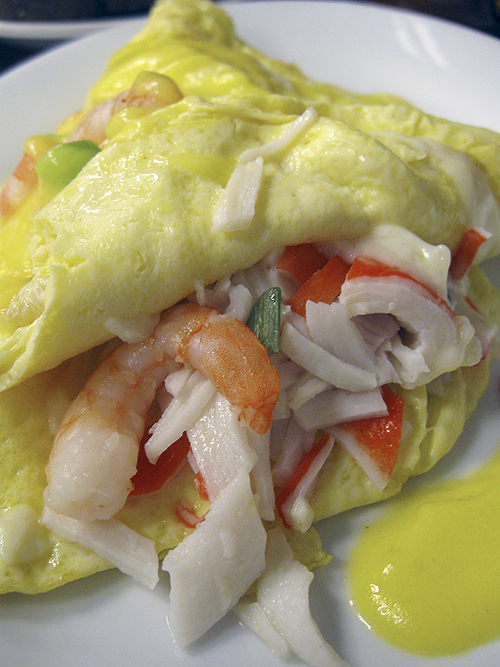 I knew what I wanted. The previous evening I’d had some of Jeanne’s wonderful Smoked Salmon at the Michigan Association of Mayors reception near the Grand River and I knew that same salmon was in the Smoked Salmon Omelet. John ordered the Smoked Salmon Omelet shown in the first photo and obviously loved it. (Alexandra had ordered the pancakes and said they were also quite good.) But Jeanne had told me of her Seafood Omelet, containing both crab and shrimp, some Swiss cheese, all topped with hollandaise sauce. I’ve always enjoyed a good seafood omelet, particularly one containing crab. This particular omelet was rather good and the Hollandaise sauce was a perfect complement to it. I’m glad I ordered it.

[Yes, I know that’s not real crab, and Jeanne herself had mentioned this the night before. Just because it’s imitation crab doesn’t mean the omelet’s not good. It was delightful, actually. At over $20/lb right now, real crab likely won’t make it into any omelet I eat any time soon, so I’ll certainly take it this way.] 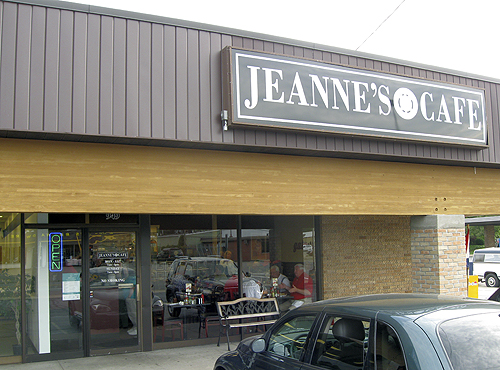 After feeding Mary and the other city leaders Jeanne came back to her café to chat with customers. After spending some time at our table she was off chatting with others … but after a while came back. She asked if I had my camera as she wanted to show some of the buffet photos from the previous evening to some new friends. After sending John and Alexandra on their way I headed to the table Jeanne wanted me to speak with. It turned out the folks there were Larry and Lisa from the Cocoa Cottage Bed & Breakfast further north in Whitehall. I’d heard of their B&B before, and Mary and I had talked about visiting such a place where chocolate is a way of life. We’ll have to head up there sometime. 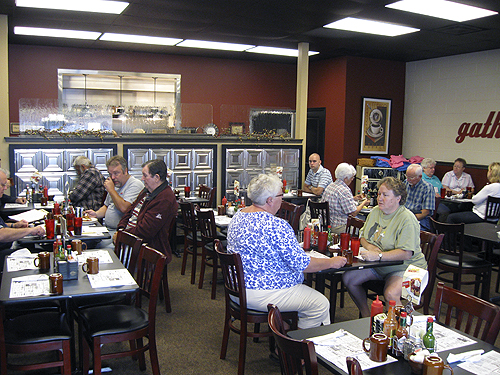 You guessed it … the interior.

The following morning I once again dropped Mary off for her sessions and went back to Jeanne’s Café for another omelet. After going through the list of 24 possibilities (I planned on something different from the Seafood Omelet) I settled on the Philly, with its roast beef, sautéed onion, green pepper and mushrooms, some Swiss cheese and a side of cream cheese. The dark rye toast seemed appropriate for this omelet. 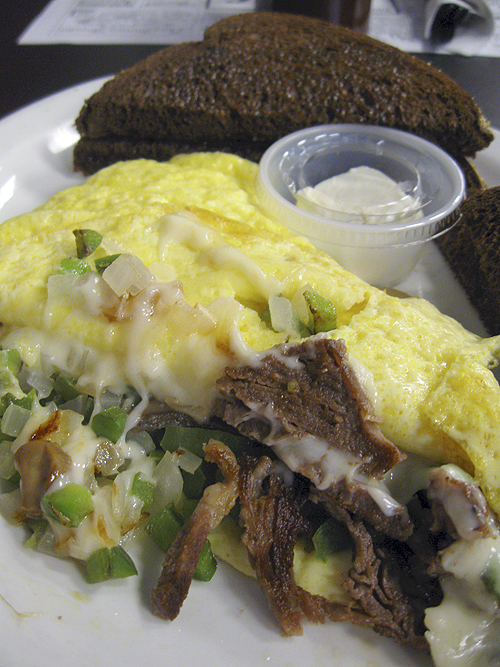 So far this one’s my favorite. The roast beef was tender and juicy. There were just enough veggies and cheese to give the impression of a good Philly Cheesesteak sandwich without going overboard. And as Jeanne had told me, the cream cheese made for an excellent topping.

One thing I really enjoy doing is making friends at out-of-the-way restaurants the locals go to but that we’d normally never hear of. There in Grand Haven, with Jeanne’s catering service and her café, and with John and Alexandra unexpectedly showing up in the mix as a nice bonus … this is a place, a city, a group of friends Mary and I plan on visiting again when we can.

A word of warning: The backs of the t-shirts read, “PLEASE don’t feed the waitresses”. I get the feeling that’s a sentence we should all heed …