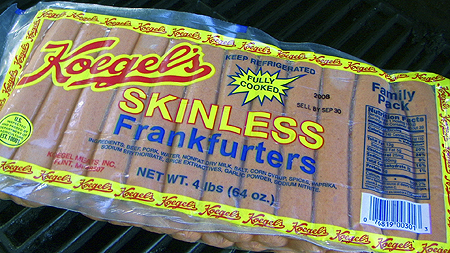 This morning I ate a Ball Park Frank, uncooked, directly out of the package I bought yesterday and licked the juices off my fingers.

Last summer when I ran the beachhouse, serving more hot dogs than I could remember in three months time, I was inspected every two weeks by an inspector from the Monroe County Health Department. During the inspector’s first visit while looking in the fridge she mentioned, “Good, you’re not keeping the proteins (ground chuck) above the raw hot dogs.”

No I’m not keeping the proteins over the … what??

The “raw hot dogs” was a package identical to the above package. I think they’re FULLY COOKED in the package but for some reason I guess I can’t really tell.

In the Off Duty section of Marine Corp Times for June 6, 2009, in an article titled “Grill Instructor”, the instructions echo what I’ve been paying attention to since that health inspection:

Looking around online I found the following … The USDA’s Food Safety and Inspection Service has this to say toward the bottom of their Hot Dogs and Food Safety page:

The same general food safety guidelines apply to hot dogs as to all perishable products — “Keep hot food hot and cold food cold.” Although all hot dogs are fully cooked, always reheat before eating. Use a food thermometer to make sure hot dogs reach 165 °F or are steamy hot throughout … Studies have shown a high level of the harmful bacteria Listeria in hot dogs. Thus, for added precaution, persons at risk may choose to avoid eating hot dogs and luncheon meats, such as bologna, unless they are reheated until steamy hot.

Listeria. Nasty stuff. Causes Listeriosis, which is described over on the site from the Centers For Disease Control:

Listeriosis, a serious infection caused by eating food contaminated with the bacterium Listeria monocytogenes, has recently been recognized as an important public health problem in the United States. The disease affects primarily persons of advanced age, pregnant women, newborns, and adults with weakened immune systems. However, persons without these risk factors can also rarely be affected. The risk may be reduced by following a few simple recommendations.

Would those recommendations also include hot dogs? By golly they do. But there is some other info in there as well:

Recommendations for persons at high risk, such as pregnant women and persons with weakened immune systems, in addition to the recommendations listed above:

Let’s start with another sentence from the above-referenced CDC’s page on Listeriosis:

Healthy adults and children occasionally get infected with Listeria, but they rarely become seriously ill.

Looking at the breakdown of the 2,500 or so people in the U.S. who become infected each year, it becomes apparent healthy adults are the exception, not the rule. And looking at all the nastiness on those pages on who is susceptible to Listeriosis, it doesn’t look as though I’m going to be keeling over from this morning’s snack of a “raw” hot dog.

Then there’s the rest of the list. No “raw” bologna, especially deli meats. God forbid I should down a package of Buddig sliced corned beef … Juice from a package of hot dogs seems to be toxic, anything unpasteurized will cause warts, homemade liverwurst paté is a death sentence, the jerky shop here in town where everything is made in the back is a disease waiting to happen, and those who keep Kosher or are from Sweden are probably on their death beds.

Not. Unless I’m pregnant. No, I’m just bloated …

In Canada from 2007 to 2008 a certain meat plant outside Toronto manufactured products which caused 22 deaths from Listeriosis.

Back on the USDA’s page: “Studies have shown a high level of the harmful bacteria Listeria in hot dogs.”

From the CDC’s page: “In the United States, an estimated 2,500 persons become seriously ill with listeriosis each year. Of these, 500 die.”

Where were these people? What did they eat? Where was it made? If it’s bad enough the Canadian’s went bananas about 22 people dying from Listeriosis, why aren’t the 500 deaths in the U.S. more in the news? Again, the CDC:

In other words, “Not to worry, nothing to see here, move along.”

That’s the reality here. There’s really nothing to worry about. If you’re high-risk, especially where the higher CDC statistics are, you might want to take it easy. Otherwise, it’s probably alright to eat the hot dog right out of the fridge … as long as you bought the hot dog fairly recently and the fridge has an average temp of 38 degrees F. Know that the hot dogs in corn dogs that are even from the carts at the county fair likely never reach 165 degrees F internal temperature because of how corn dogs are made. And jerky? I know where you can buy some good stuff, even jerky made from turkey and buffalo.

I think I’ll go get me some. That Cruisers Car Hop serves hot dogs right next door, too. Maybe I’ll have a coney island, too …