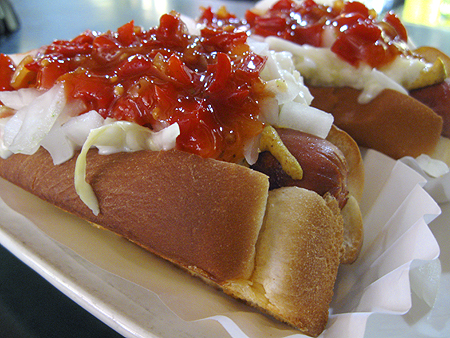 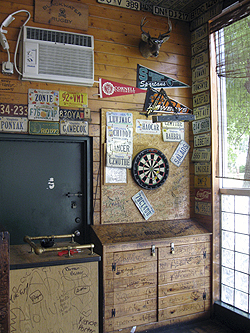 Last Friday the gent I was working with in Lynchburg, Virginia, had heard about the hot dogs I’d had at the Texas Inn the previous evening. I’d told him they weren’t all they were cracked up to be. He felt I needed to have something better. He gave me a couple suggestions, including the possibility of a lunchtime pizza, and then recalled a place that served hot dogs having what he called, “A nice red sauce.”

The place is … unique. From the outside it could be a dry goods store, with its aluminum window frames and glass block halfway up the front wall. Inside, the wood walls were either inscribed with personal graffiti or covered with license plates, flags, and Lord knows what else. For only being there 22 years, it looks a lot older. 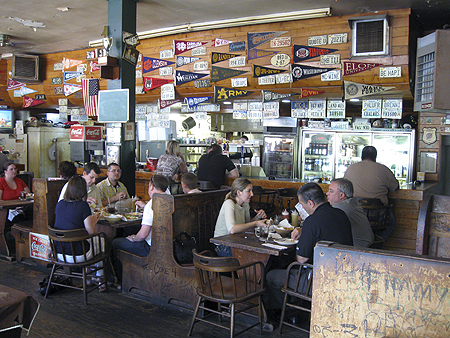 Sam didn’t look at a menu … he simply ordered the two hot dogs, “with the red sauce”, including mustard and chopped onion, and a side of seasoned fries. I went ahead and ordered the same.

After probably 15 minutes, the waitresss placed the dogs in front of us, and handed us each a fork and knife saying, “You’re gonna need ’em”. She was right … I couldn’t pick the darned hot dogs up! The sauce looks hot and spicy, but is actually quite sweet. The hot dogs and their sweet sauce were good, and honestly, I could only eat one-and-a-half of them. Why? Well, there were probably two whole potatoes in the basket of fries … 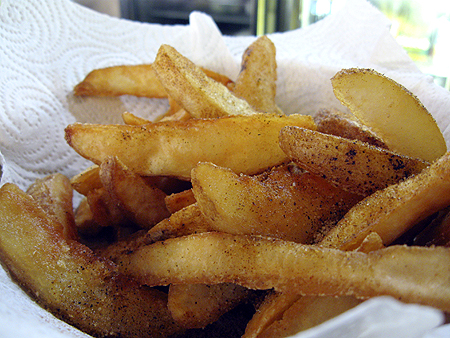 The fries were probably the best part of the meal. Crispy on the outside with tender potato when I bit into them, they were coated with a seasoning mix that wasn’t as powerful as I expected. The seasoning provided a good balance for the fries instead of providing all the flavor. I could taste the potato. That’s quite a change from a lot of fries I’ve had.

Hot dogs and fries. Who’d have thought they’d make the best meals on that part of the trip?