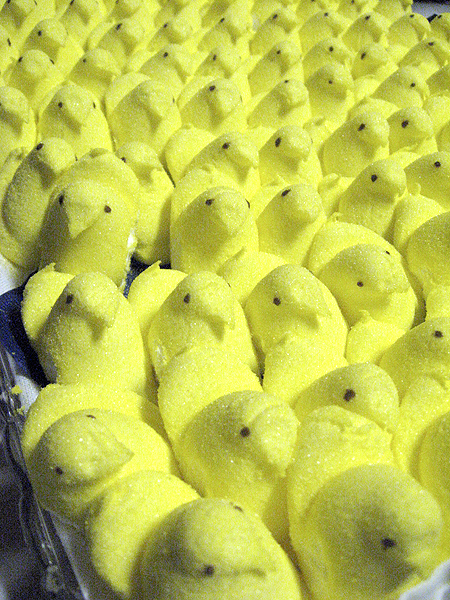 At Beth’s wedding in May 2008, an army of Peeps readied itself for an attack on Minas Tirith …

The other day my daughter Briahna said the darndest thing. She said, “I like to leave Peeps out for about a week so they get stale”. Mary and I just looked at her funny. Why? Because she was actually serious about it.

Newsflash, Bri: Peeps are made stale. They’re stale marshmallows. Inside, they’re just weird. And the outer crust is as though they’ve been in the sun too long next to the untouched potato salad that smells like overused and underwashed wet feet.

They even look evil. Look at that photo. I didn’t do anything to the Peeps in the photo to make them look evil. They just do. From Captain Quint in Jaws, those are “Lifeless eyes, like a dolls eyes”. And so many of them. They’re just … wrong. And evil.

Peeps belong in the wrong side of the stories of Lord of the Rings. There should be a movie titled Attack of the Killer Peeps. And to paraphrase Nathan Lane in Mouse Hunt, “Nostradamus didn’t see these things coming”.

And they are coming. This weekend. Peeps are coming in droves.

Beware of their cutesy inroads. Peeps Lip Balm. The Peeps Diorama Contest at the Washington Post.

Then there are recipes for cloning.

And Lord of the Peeps.

So don’t give me any friggin’ Peeps. Any Peeps given to me will be shipped to the home of a Toledo police officer, where the Peeps will be severely dealt with.

I kid you not.