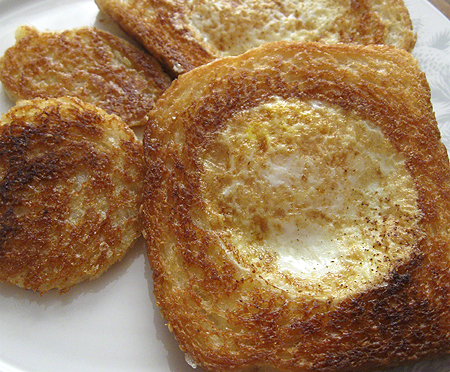 A batch of dad’s Eggs In A Frame, made specifically for this memorial by my 14-year-old daughter Briahna.

As I’d written previously, my father Erwin F. Liske passed away on December 29th. Mom’s been in the hospital herself, so the funeral has been on hold. Visitation will finally be tomorrow with his funeral being on Monday. I’ve been working on two tributes. One is a digital photo frame with a slideshow of 80 photos of dad over the years, along with four songs I feel are fitting for him including Brad Paisley’s “Waiting On A Woman”. The other is this recipe of dad’s, the Eggs In A Frame he would make every Wednesday for whomever was in the house at the time. I’ve made a printable version you can download by clicking here. Just print it up on two sides of a piece of paper and fold it in thirds to have it just how it will be at the funeral home tomorrow next to the digital frame with the slideshow.

Following is some of the text from this pamphlet containing dad’s recipe plus a much older version.

Our dad, Erwin F. Liske, learned this recipe from a gentleman by the name of Larry Hagemaster. Erwin and Larry worked together at the General Motors stamping plant in Grand Blanc, Michigan, until Mr. Hagemaster passed away at the tender age of 40. Grandpa Erwin still made this for breakfast each and every Wednesday morning for decades for Grandma Joyce (after they completed a few games of Solitaire with real cards) and whomever else might have been in the Liske house at the time. He continued to make this breakfast as often as he could until he passed away at the age of 85 in late 2008.

My sister Barb reminded me of how protective dad was of how he made Eggs In A Frame. Dad tended to use quite a bit of salt on this dish as he was making it. If you didn’t want that much salt and said so, he would become quite indignant as he felt he knew best how to make this family favorite. But even though he insisted on using as much salt as he did, we always looked forward to his sharing this particular breakfast with us.

Today this tradition still stands, at least in my house. Dad’s Eggs In A Frame is the only reason I bought the biscuit cutter seen in the above photo. [This photo is in the recipe pamphlet.] The cutting board shown here is the one dad used for making this breakfast for quite a long time. I used it for the same purpose for a long while, teaching my own kids how to make this dish. My two middle kids Adam and Briahna love to make Eggs In A Frame. In fact, the image on the front of this pamphlet is of a serving made by Briahna at age 14. Briahna made this particular batch specifically for the image on the cover of this pamphlet, in loving memory of her beloved grandpa Erwin, whom she misses a great deal …

The back cover of this pamphlet contains a British version of this recipe from the mid-to-late 1800’s when the dish was called Ox-eyes. Online references give this centuries-old dish other names, such as egg in a window, egg in the hole, pirates eye, toad in the hole, Rocky Mountain toast, eggy toast, hobo toast, cave entrance, yolky pokey, o’johnnies, nest egg, toaster spurtals, egg-holey-o, submarine egg, gashouse eggs, eggs in a pocket, one-eyed Jack, baby in the hole, and bird’s nest. (partial source: Wikipedia.org)