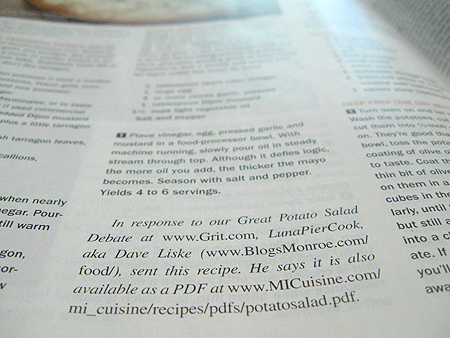 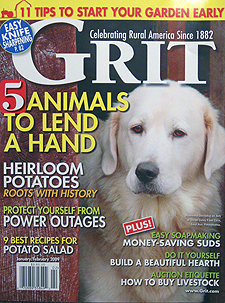 A few months ago I stumbled into The Great Potato Salad Debate in the forums over at the 120+ year old Grit Magazine. There were discussions back and forth about various aspects of potato salad, such as whether or not mustard is an appropriate ingredient, whether or not to add pickles, what kind of potatoes to use or even to add onions at all … it ran the gamut of a lot of opinions. I threw my own German-Polish Oven-Roasted Potato Salad into the mix which Grit Senior Associate Editor Jean Teller really seemed to appreciate. Jean became a regular visitor to Luna Pier Cook and comments on my posts here when something strikes her fancy.

The current (January/February 2009) issue of Grit Magazine carries an article Jean wrote titled “Make The Best Potato Salad” which contains ten recipes. (Oddly enough, the cover carries a blurb stating “9 Best Recipes for Potato Salad” … anyway … I digress …) The complete recipe for my potato salad is included in the mix.

Truth be known though, I’m in the process of giving this recipe a redevelopment. Meat is included, and almost every time I’ve made it someone has said, “There’s meat in there? I can’t have it.” There will be two versions; A base version with no meat, and optional additions to include the beer-braised Polish kielbasa if you’d like.

Yes, you Miracle Whip lovers … I’m keeping the Hellman’s mayonnaise in the rewrite. Deal with it. 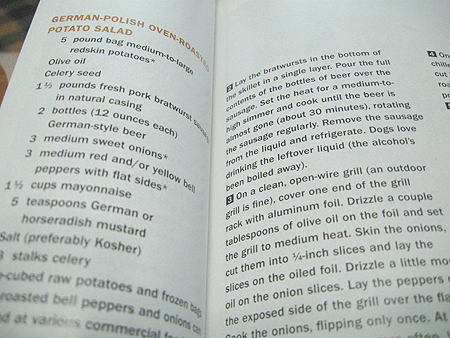