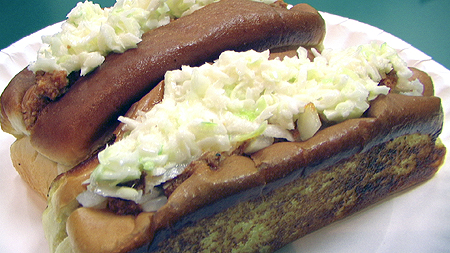 A pair of hot dogs in grilled buns, with mild chili and coleslaw, from the Sam’s Hot Dog Stand in Marmet, a little burg south of Charleston, West Virginia. Click the image for a larger version.

Anyone who followed the stories of our Luna Pier Dog House over this past summer knows my affinity for a good hot dog, assembled well using excellents dogs and well-made condiments, and sold for a decent price that doesn’t screw the customer over.

Regular readers will also be aware of my feelings about the differences between a “coney” and a “chili dog” … and that you’d better know how to order one vs. the other.

This past Thursday evening after passing through the beautiful city of Charleston, West Virginia (in that city’s equally incredible setting within the mountains), we needed gas. Coming off the expressway in Marmet, we spotted the gas station signs, as well as a sign for a Sam’s Hot Dog Stand. Ok, so I spotted the sign for the hot dog stand … anyway … well … ya’ know, since running that hot dog stand this past summer. I’ve got a hankerin’ to find out what other people are serving.

We headed in that direction.

After getting gas, Mary and Caleb headed for the Subway inside the Exxon station. Meanwhile, I headed across the parking lot for Sam’s. 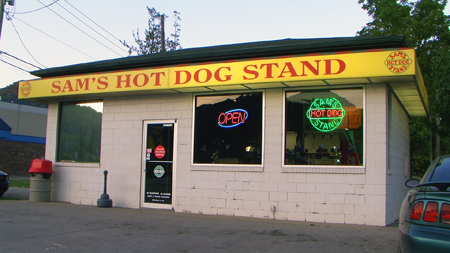 No, it doesn’t look like much. Why’s that? Ok, get this: It’s a hot dog stand. It’s not a full-scale restaurant. For that matter … you see that window to the far left? That’s an entirely separate room that’s not part of the hot dog stand. Something about video gaming … anyway, the stand is only the right 2/3s of the building. Three tables inside if I’m not mistaken. Yup, that’s a stand. Pretty big one if’n you ask me. 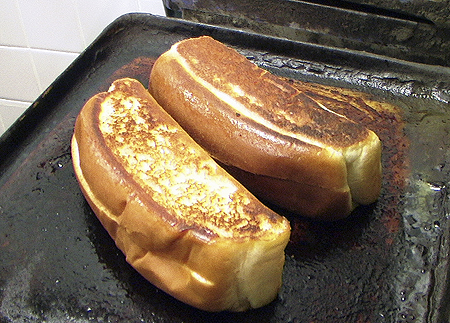 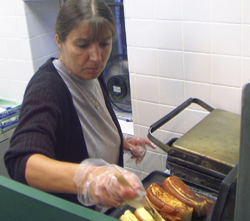 This is Theresa, who was operating the stand at the time I walked in. After ordering my two hot dogs with mild chili sauce and coleslaw, we got to talking. Theresa told me both the chili (there’s both a mild and a hot version) and the coleslaw (note to self; not “cole slaw”) are made at the Sam’s Hot Dog Stand headquarters in Huntington, West Virginia, and shipped to the 40 Sam’s locations. Theresa grabbed a couple split-top hot dog (“English”) buns, heavily buttered both sides, and laid them out on an open sandwich press. After grilling both sides of the New England-style bun, she loaded into it a skinless hot dog, then laid on the mild chili and the homemade coleslaw.

The resulting hot dog was very smooth indeed. The bun was reminiscent of a well-made grilled cheese sandwich. The hot dog, while apparently steamed (I like grilled better than steamed, but steamed them all summer long for my own customers), was apparently one made of good beef and had an excellent flavor. The chili was certainly mild with a solid flavor, and the slaw was just right; crunchy, not too sweet, while also being not too bitter.

Mary and Caleb each had a bite of these dogs, and really liked them. With no harsh ingredients whatsoever, and being inside those buttered, grilled buns, these hot dogs turned out to be like potato chips. My two dogs and pop (sorry, soda) cost just over six dollars. I ended up fighting with myself over whether or not to have two more. I lost (no, I did!), and I squelched those cravings … 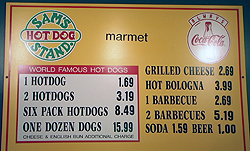 There are some interesting thoughts going on in my head about this Sam’s place. No, I’m not going to open a franchise here in Luna Pier. (Although that’s not really a bad idea … I’d have to insist on using Koegel hot dogs of course … nah, couldn’t do it, Sam’s would argue the point … oh well …) Look at the menu for the Marmet, West Virginia, location I visited. (That’s it to the left. Click on it if’n you can’t read it.) At the Luna Pier Dog House we charged extra for the coney sauce we made from scratch. But at Sam’s they only charge extra for any cheese, or for the “English bun” mine came on. So instead of charging for the labor to make the sauce and cole slaw (sorry, chili and coleslaw), they eat that cost, and instead charge extra for the labor to grill the bun, or for the cheese a la Wendy’s. Interesting, that.

There’s something else I find uniquely interesting.

Check out the story of Sam’s Hot Dog Stand on the home page of their web site. Frank Lucente grew up eating a certain hot dog … a chili dog at a certain location. As an adult he would still go back for those. Later, after closing the place, the owner wouldn’t give up the recipe and had changed it anyway … but a woman had the original and was making that. Frank refined her version and that’s what he sells.

Now, head over to this page, download my own recipe or my Flint-style coney sauce from this past summer and read the history. I grew up eating a certain hot dog … a coney dog from a certain restaurant. As an adult I would still go back for those. The original owners won’t give up the recipe, and new owners have changed the recipe anyway. My aunt apparently snagged the original recipe some decades ago. My own version from this summer was a refinement of what she passed down. 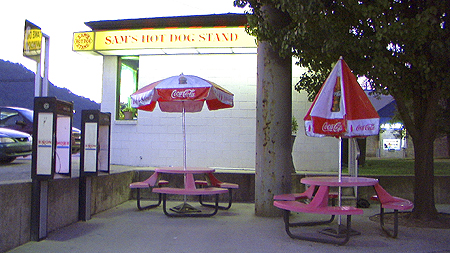 Finally, this is the dining area that’s next to the building, just off the Exxon parking lot. This was a comfortable place to enjoy a couple nicely-made hot dogs in beautifully-grilled buns.

Oh, and a couple Subway sandwiches, too.

Did I mention Mary and Caleb each had a bite of those dogs, and really liked them?