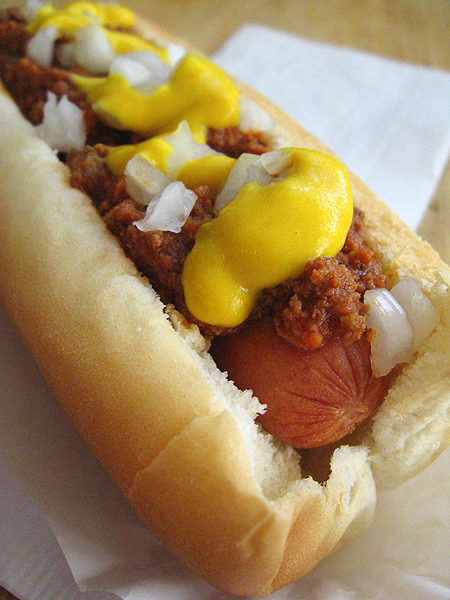 This is probably one of the most duplicated and modified recipes for the sauce. Posters constantly claim “This is the original!”, and the even more ridiculous “My [insert relative here] got this from the owners!!!” One of the more common rumors is “This was published in the Flint Journal some time after the death of the man who created it. His wife allowed it to be published.” However, Brayan’s wife Velicia passed away in 1976, while Simion himself lived until the age of 100, not passing until 1990, so that particular rumor is patently false. The simple fact is, this recipe is actually nowhere near Simeon O. Brayan’s all-beef-heart/no tomato original sauce from 1924, a version of which is made by Abbott’s Meats.

Versions of this recipe have appeared over the decades in the Flint Journal. There’s also a version on the back page of ʺTwo to Go: A Short History of Flintʹs Coney Island Restaurantsʺ, by Florine, Davison & Jaeger (2007, Genesee County Historical Society) and in the chapter on the subject of the Flint Coney in “Remembering Flint, Michigan: Stories from the Vehicle City”, by Gary Flinn (2010, American Chronicles (History Press)). I recall my mom making this back in the 1970s from a recipe handed down by her Aunt Fern.

Our current information on where this recipe originated is available on this page. In his book “Scoops: Ron Krueger’s inside dish on The Flint Journal’s favorite recipes” (Flint Journal, 2000), the long-time food writer included the Journal’s version on page 21, without a credit listed. I asked Mr. Krueger about this on November 6, 2014, and he replied, “That recipe appeared in The Journal several times over the years. Don’t think I ever saw it in the context of a story or ever saw any attribution. It always included the word ‘original’ in the title, but anybody who knows anything knows otherwise.”

We make no claim that it’s the “original recipe for the sauce”. No one else should either. That’s simply not true.

Note: There’s one technique that’s generally missing from this recipe. If any restaurant ever did add leftover ground hot dogs into their beef heart-based sauce, those hot dogs would have been grilled Koegel natural casing Coney Franks. Grilling them before grinding changes their flavor and consistency, which also changes how the finished sauce presents. Using grilled Koegel Viennas in this recipe makes the most sense for the home cook.